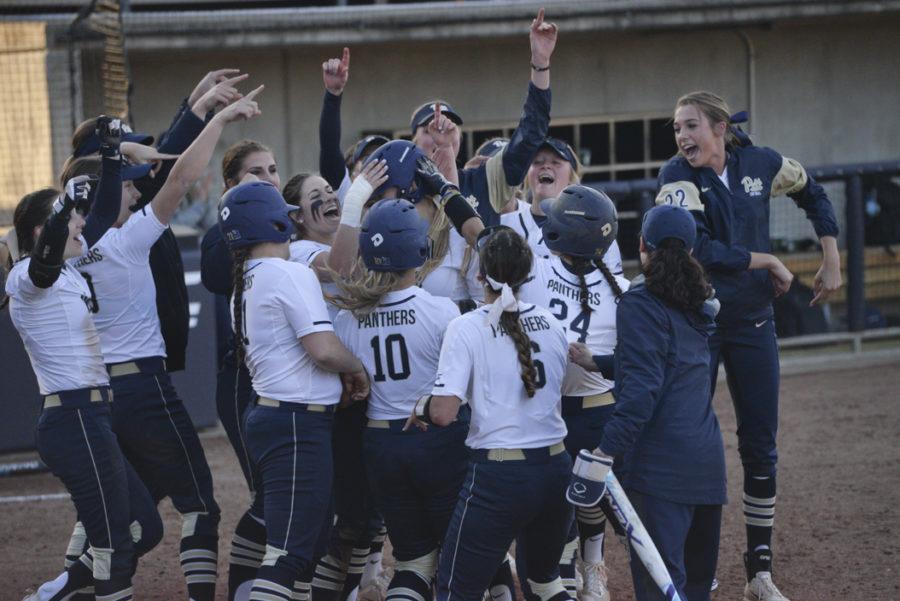 With the rival Penn State Nittany Lions in town and bragging rights on the line, the Pitt softball team left no doubt about who the best softball team in the state is Wednesday night.

The Panthers (17-13) climbed out of an early 1-0 hole with seven unanswered runs in a 7-1 victory against the Nittany Lions (12-18) at Vartabedian Field. Sophomore pitcher Sarah Dawson silenced Penn State’s bats over five innings of scoreless relief, and fellow sophomore Gabrielle Fredericks blasted a two-run pinch-hit homer in the bottom of the sixth to put the game away.

“It’s always a little bit sweeter when you win over Penn State. In any sport, really,” Dawson said.

Pitt head coach Holly Aprile was proud of her team’s all-around dominant performance in the win.

Nittany Lions center fielder Rebecca Ziegler led the game off with a two-strike double to the left-center field gap, then came home to score on an RBI single down the third-base line by first baseman Kristina Brackpool.

The Panthers tied things up in the bottom of the second after junior shortstop McKayla Taylor led off with an infield single. Penn State third baseman Shelby Miller then made an errant throw on Pitt junior center fielder Erin Hershman’s sacrifice bunt attempt, allowing Taylor to come around and score.

Panthers starting pitcher Brittany Knight only gave up one run in the first two innings, but Aprile saw Knight laboring and decided to call on Dawson for the top of the third.

“I thought [Knight] was behind in counts a little bit, struggling a little bit,” Aprile said. “Sarah had a great outing on the weekend, and we wanted to get her in there and keep her rolling.”

Dawson gave up a single to Brackpool after a groundout, but Pitt first-year catcher Valeria Ortega gunned Brackpool down trying to steal second base. Miller then drew a walk, but she too made an ill-fated attempt to steal second as Ortega threw her out to end the inning.

The Panthers took their first lead in the bottom of the third with a bit of two-out lightning.

First, junior cleanup hitter Giorgiana Zeremenko laced a single to left-center field, then senior first baseman Kaitlin Manuel followed with an RBI triple off the wall. Ziegler crashed face-first into the wall in left-center trying to make the catch and had to leave the game.

Taylor then delivered an RBI single up the middle to give Pitt a 3-1 advantage. Two more singles from sophomore second baseman Alexis Solak and first-year pinch hitter Alexee Haynes made it a 4-1 game, but Haynes got thrown out trying to stretch her single into a double to end the inning.

Dawson allowed a pair of singles in the top of the fourth, but got out of the inning unscathed by inducing an inning-ending double play. The Nittany Lions then loaded the bases in the top of the fifth, but Dawson forced left fielder Tori Dubois to ground out softly to escape the jam.

Despite facing the potential go-ahead run at the plate, Dawson never panicked.

“I wasn’t worried, because my defense was playing a flawless game,” Dawson said. “I was not worried at all. I just wanted to get out of that inning.”

Zeremenko walked to start the bottom of the fifth, then sophomore Marissa DeMatteo entered to pinch run for her. DeMatteo advanced to second on a passed ball, moved up to third on a groundout and scored on a wild pitch to give the Panthers a 5-1 lead.

Gray reached first base on an error to lead off the bottom of the sixth, then Fredericks came in to pinch hit for first-year left fielder Hannah Edwards.

Fredericks — who transferred to Pitt in the fall after driving in 25 runs and batting a team-leading .319 in her first year at Akron — fouled off six pitches to stay alive. Then, on the 11th pitch of the at bat, she launched a two-run homer over the right-center field wall to push Pitt’s lead to 7-1.

The homer was the first of Fredericks’ college career, and even though it easily cleared the wall, she didn’t know if she got enough of it right away.

“It felt really good off the bat, but I wasn’t really sure,” Fredericks said. “I just tried to work a good at bat, and it ended in a good result.”

Dawson came back out for the top of the seventh and fired her fifth scoreless inning in a row to cap off the 7-1 victory.

The Panthers will now travel to Tallahassee, Florida, for a three-game series against the top-ranked team in the nation, the Florida State Seminoles. The series opener is at 6 p.m. Friday, March 31.