IGA in Oakland to close in one week 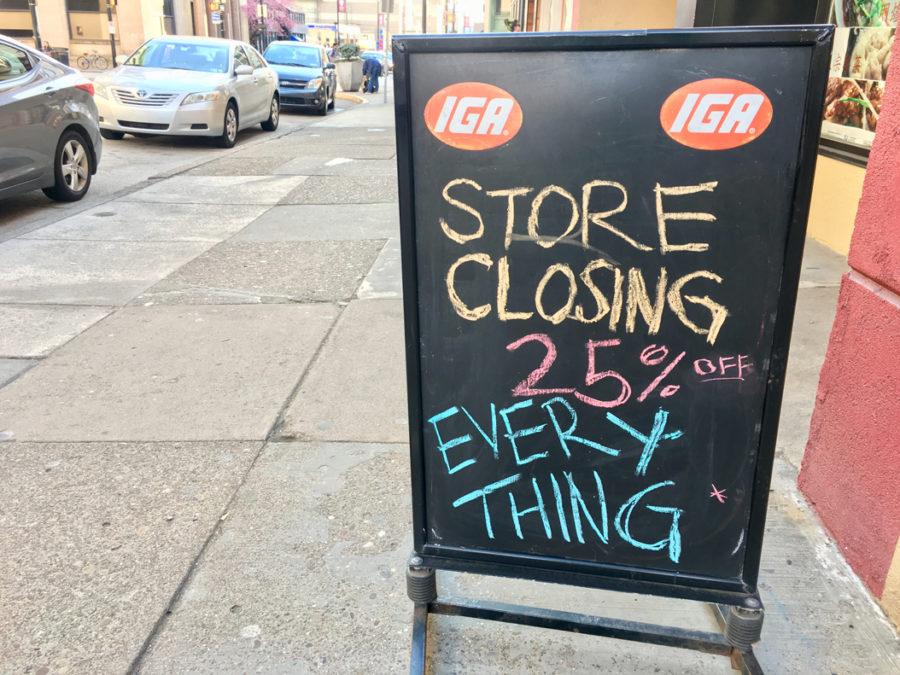 IGA will close at the end of the week. Meghan Sunners | Visual Editor

After serving as the only grocery market on Pitt’s campus for the past nine years, The Market on Forbes IGA will soon close its doors forever.

IGA owner Ron Levick said that due to competition with other grocery stores, he will be closing the store either this Friday, April 7, or early next week. Levick is currently running a 25 percent-off sale, which he says will drop to 50 percent-off in the final two days of being open. He will convert the storefront into a rentable shared office space over the course of the next four months.

According to Levick, the competition to attract students buying groceries is simply unbeatable. He said when he opened in 2008, he was “filling a big void” in the area since there were no other grocery markets on campus. But now, nearby convenience stores CVS and Rite Aid carry more dry goods than ever before. Beyond that, grocery stores in neighboring areas are pulling students out of Oakland to go grocery shopping.

He also said, in the age of Uber and Lyft, more students are willing to travel farther distances to grocery stores. Looking toward the future, he also said services like Uber RUSH — which will deliver goods to users — will hurt local grocery shops.

“Here was the model before: if you wanted to go grocery shopping in Oakland, you took the bus to Squirrel Hill … It was basically an hour and a half experience,” Levick said. “So, I was saving people. I was convenient. But now you call an Uber and it’s outside in two minutes.”

Levick felt a mounting uncertainty about the store’s ability to succeed around January, and after seeing one of the slowest weeks for business in IGA’s history over this past spring break, he said the question to close the store became clear. The student customer base that would fill the store began to dwindle, and with the summer term approaching, even fewer students would be around the neighborhood to purchase groceries.

Levick began toying with different business opportunities in the ’90s at the Strand Building — where IGA currently stands — when he opened a sports bar called The Attic, a music venue called Club Laga and a dance club called The Upstage.

Levick said he saw the culture of Pitt students change at the turn of millennium, however, with fewer students willing to go out and party on weeknights, so he closed the clubs in 2004. He’d converted the space into apartments and IGA by 2008.

According to Levick, the apartments in the upper floors, which he called “the anchor of the building,” will remain, but IGA’s future simply looked too grim to continue.

“The future was going to get more and more difficult and when you’re working harder and making less, it’s just not fun anymore,” he said. “It becomes work.”

A previous version of this story reported that Ron Levick said, “When I opened, Trader Joe’s didn’t exist, Whole Foods didn’t exist, Target was not there.” While Ron Levick did say this, both Trader Joe’s and Whole Foods were operating in 2008 in East Liberty and Shadyside, respectively. The current version of the story has been corrected to reflect this. The Pitt News regrets this error.