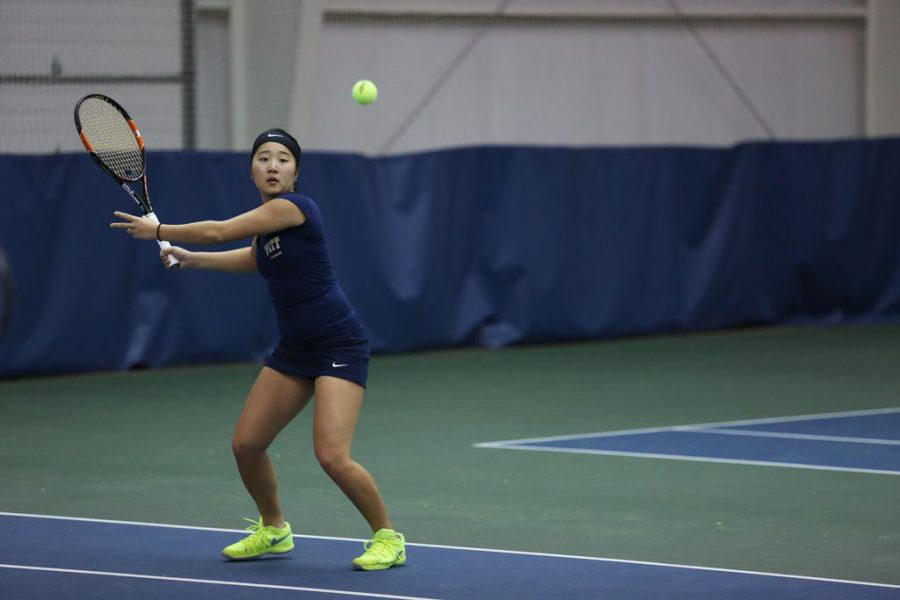 Natsumi Okamoto was the only member of the Pitt tennis team to win a match this weekend. Courtesy of Pitt Athletics

Riding a four-game losing streak, the Pitt women’s tennis team looked to turn its season around during this weekend’s trip to North Carolina. Unfortunately for the Panthers (3-10, 0-8 ACC), the weekend brought no respite.

The team played against No. 17 Duke in Durham Saturday and No. 26 North Carolina State in Raleigh Sunday but lost both to lengthen the losing skid to six games.

In the first doubles match against Duke, sophomores Natsumi Okamoto and Gabriela Rezende only managed to win one game as the Blue Devils quickly dispatched them, 6-1.

In the singles portion of the match, the top-three positioned Panthers couldn’t manage much against the Blue Devils. Washington, Rezende and senior Audrey Ann Blakely all lost in straight sets, winning a combined 11 games.

In the fourth singles match, Frey put up the strongest fight against the Blue Devils.

After quickly dropping the first set 6-0, it seemed she’d suffer a similar fate as her teammates in the first three singles matches. However, bouncing back in the second set, Frey went game for game with her opponent and eventually won a tiebreaker to take the set 7-6 and force a third set.

The two went back and forth again, forcing a second tiebreaker. But Duke’s Alyssa Smith separated herself by a few points and she eventually topped Frey, 10-6, to take a 2-1 match victory.

The final two singles players for the Panthers, sophomores Clara Lucas and Okamoto, both lost in straight sets. The Blue Devils finished the day’s competition with a 7-0 shutout.

“I felt that we could have managed the doubles point better,” head coach Alex Santos said in a press release. “We jumped to a great start on all courts but struggled with maintaining the energy and competing relentlessly on every point.”

More of the same struggles followed the Panthers into Sunday’s competition against NC State.

In the doubles portion of the match, both Panther teams struggled mightily, winning only one game combined between the two sides in their quick defeats.

Facing an early 1-0 deficit in the match, the Panthers couldn’t gain any momentum in the singles portion.

Up against No. 55 Martina Frantova, Washington initially struggled in her match, dropping the first set, 6-1. She picked up her play in the second set, but couldn’t keep her opponent off the board, ultimately suffering a 6-4 set loss to seal her defeat.

Moving down the singles roster, every Panther fell in straight sets except for Okamoto who earned a victory via forfeit, sealing an overall 6-1 loss for the Panthers.

Despite the ongoing losing streak, Santos said she’s confident the Panthers can still turn this season around.

“Credit to NC State for taking the lead and running away with it,” Santos said in a press release. “I believe in this group and we will keep fighting until we find it.”

The Panthers will get their next opportunity Friday April 7, at the Alpha Tennis and Fitness Center in Harmarville, Pennsylvania, where they will take on Wake Forest in a 4 p.m. matchup.