Panic at the Pete: Wise, Johnson’s transfers cause for alarm 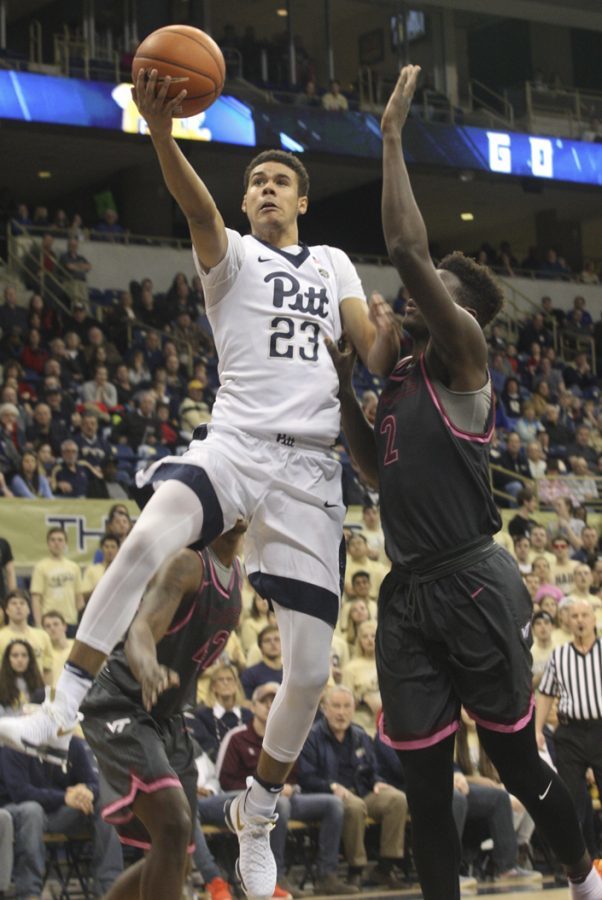 Cameron Johnson (23) is the fourth player to transfer from the Pitt men's basketball team since the end of the season. TPN File Photo (2017)

It started with a harmless announcement March 13.

That’s when sophomore guard Crisshawn Clark revealed his intention to transfer from the Pitt men’s basketball team after missing the entire 2016-17 season with a torn MCL and meniscus. Clark could have provided some useful depth for the Panthers if healthy in time for next season, but he likely wouldn’t have been an impact player.

The next day, another of Pitt’s young hoopers followed Clark’s tweet with one of his own. True freshman Corey Manigault — a 6-foot-8 forward who saw limited playing time in 2016-17 — announced that he too would be leaving the program next season.

Manigault brought a lot of potential with him, even though he didn’t seem ready for ACC-level basketball as a true freshman, and his announcement was a bit more concerning, as the Panthers’ entire 2016 recruiting class had now disappeared in the span of one year. Along with Clark and Manigault, Pitt head coach Kevin Stallings dismissed true freshman point guard Justice Kithcart March 3 prior to the team’s regular season finale.

Still, the losses were far from devastating blows.

Now, 10 days after Clark’s announcement, another player has decided to head for the Petersen Events Center’s exit doors in search of a new home — sophomore guard Damon Wilson. Wilson was a highly touted prospect in 2015 who had yet to reach his full potential while receiving limited playing time.

The departures were unfortunate, but still no reason for Panthers fans to panic. Some turnover was expected with four new recruits already signed and three more verbal commits planning to join the team in 2017. It’s understandable if Wilson didn’t feel like Pitt was right for him and wanted to pursue a bigger role elsewhere.

The very next day, the women’s basketball team received some much more devastating news when the University revealed sophomore forward Brenna Wise is pursuing her own transfer from the school.

Wise has been the face of the program since she arrived on campus. The Pittsburgh native led the Panthers in scoring and rebounding in each of her two seasons at Pitt while developing into one of the most versatile and effective players in the ACC.

The Panthers haven’t seen much team success in the last two years, but Wise was positioned to form the core of a much-improved bunch next season with junior Yacine Diop returning from injury. Now, the women’s basketball program is in shambles as it tries to replace the one player it needed to succeed.

The men’s basketball team was dealing with its own losses, but nothing too drastic. Clearly the team was in a transitional period, and nobody was expecting much improvement on this year’s 14th place finish in the ACC next season — not with four starters graduating, including All-ACC performers Michael Young and Jamel Artis.

What fans were expecting was a group of talented first-year players, led by point guards Marcus Carr and Aaron Thompson, to come in and establish a new foundation for the program. And they would do it alongside the one returning starter who was slowly developing into a star: Cameron Johnson.

The 6-foot-8 shooting guard progressed from 4.8 points per game in his first season to 11.9 points per game as a sophomore last year, while shooting a team-best 41.5 percent from 3-point range. Now, the feared long-range threat was poised to be the focal point of Stallings’ high-octane offense.

Soon after Mississippi State shocked the Connecticut women’s basketball team and snapped the Huskies’ 111-game winning streak in the Final Four, Pitt fans received a shock of their own as news broke that Johnson would be pursuing his transfer from Pitt.

The move sent the Pitt Twittersphere into an uproar, as fans finally felt the full realization of the crumbling team and memes started sprouting up comparing the 2017 roster to the casts of bumbling misfits from TV shows like Full House and The Office.

It’s normal for any team to have one or two players transfer after a disappointing season, whether to seek out more playing time or try to play closer to home. The Pitt women’s basketball team lost two key players, Stasha Carey and Frederique Potvin, after the 2015-16 season. But the Panthers added graduate transfer center Brandi Harvey-Carr and enough incoming talent to offset the losses.

But replacing Wise will be an entirely different task, and one without a clear solution. Meanwhile, the mass exodus the men’s basketball team is facing is certainly unprecedented.

Carr, Thompson, junior college transfer Jared Wilson-Frame and several other incoming players had the ability to play key roles right away on next year’s team. But the Panthers needed a go-to scoring option with legitimate ACC chops to center their offense around.

Stallings had that blossoming star player in Johnson. Now, he has a combined returning 9.3 points per game to build around.

And, finally, both the men’s and women’s basketball programs officially have reason to panic.