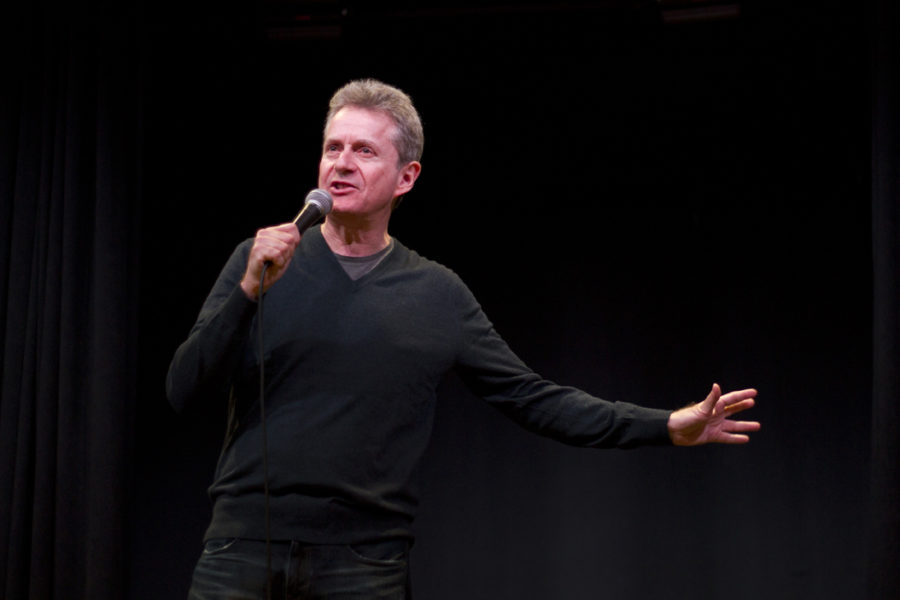 Comedian Scott Blakeman gave a performance touching on his religion, politics and college life as part of a joint performance with his friend and fellow performer Dean Obeidallah. Thomas Yang | Staff Photographer

A Jew and a Muslim got up on stage in the William Pitt Union Ballroom — that’s not the punchline of a joke, those are the comedians.

Comedians Scott Blakeman and Dean Obeidallah brought their act Stand Up for Peace to Pitt Wednesday night, at an event hosted by Pitt’s Hillel Jewish University Center and Muslim Student Association. Stand Up for Peace is a comedy show encouraging conflict resolution between Jews, Muslims, Arabs and people of all backgrounds and religions by exploring what they have in common through humor.

“The goal of our show is to bring people from two different groups together to notice the similarities in their lives through positive comedy,” Blakeman said. ”After all, the best way to start a conversation is through laughter.”

Blakeman and Obeidallah have been performing Stand Up for Peace together for 13 years. Blakeman has served as a mentor for the likes of Jon Stewart and Caroline Rhea, and is a frequent news contributor to news outlets such as MSNBC and Fox News. Obeidallah is a regular contributor to The Daily Beast and has his own SiriusXM comedy show.

Meital Rosenberg, senior economics and international and area studies major and former vice president and active member of Hillel, said the intent of bringing in the duo was to show people that two groups often seen as very different actually have much in common.

“At the end of the day, we’re all human,” she said. “We’re not isolated categories. We want people to walk away from this understanding everybody wants to have peace and be able to laugh together.”

Blakeman guffawed along with the 30 students in front of him — some Jewish, some Muslim, some neither — as he joked about Judaism and politics.

“I went to a diner that said they serve Kosher-style food. What is that? Ham wrapped in pork, drizzled with cheese and milk only served on Yom Kippur?” he joked.

“Hillary Clinton claimed she was part Jewish during her presidential campaign. I looked it up, turns out it’s true. She had a ninth cousin twice removed who ate a brisket sandwich once.”

His comedy partner, Obeidallah, followed his act with humorous observations of his own about Islam and the trials that come with being Muslim. His witty and sarcastic remarks had the audience’s shoulders shaking with laughter and heads nodding with understanding.

“Arabic Muslims say ‘Inshallah’ all the time. It means ‘God willing.’ I once asked where the bathroom was in an Arabic restaurant, the guy said it after he told me.”

“During an interview on ‘Fox and Friends.’ they asked me, ‘As an Arab and a Muslim, how many  terrorists do you think are out there?’ I was like, ‘I don’t know? Eighty-three?’”

Senior Spanish language and literature major Jordan Kurzum, a Christian Palestinian, came primarily to see Obeidallah, who he described as famous in the Arab community.

“Politics are crazy right now, and as an Arab I can relate to a lot of the stuff he talks about,” Kurzum said. “I’m here mostly for a laugh, but I think it’s a spectacular idea that they’re using humor to talk about controversial issues.”

According to Blakeman, the duo’s show has always focused on breaking down barriers between Muslim and Jewish communities. But they believe the political and social relevance of what they do has grown recently, with the rise in hate crimes and threats against the two groups.

“Our message now is more important than ever, given the rise of anti-Semitic and anti-Muslim sentiment in America,” Blakeman said.

Elyssa Steinberg, a junior psychology major and member of Pitt Hillel, said she thinks the duo’s mission serves an important purpose in bringing together two communities that are going through tough times.

“We’re both groups facing injustices right now,” Steinberg said. “This act shows a unity that isn’t necessarily brought to light, and which really needs to be seen nowadays.”

Pitt Hillel and MSA partnered for the event, but Yosra Kandil, a sophomore history major and president of MSA, said the relationships between Jewish and Muslim people are often misrepresented.

“There’s this idea that Muslim and Jewish populations can’t get along,” Kandili said. “But I think a comedy event, where everybody comes together to laugh and enjoy themselves, defeats that idea.”

Obeidallah said the duo perform a lot at mosques and synagogues, but college students are their favorite audiences because they tend to be more “intellectually curious” than older crowds, according to Obeidallah. Blakeman said the two jokesters enjoy performing on campuses because they have the biggest impact.

“Younger people got their whole life ahead of them, and they’re at a time when they’re making a lot of their own decisions,” Blakeman said. “We hope that the message our act conveys inspires them, that they take this stuff with them when they leave.”