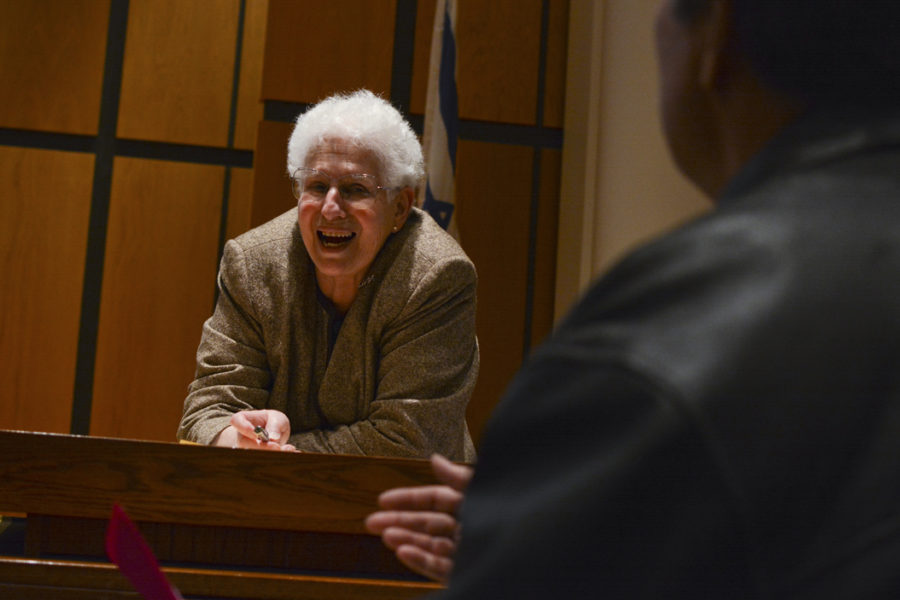 Sue Brougton speaks to a crowd at the Rodef Shalom Auditorium in Shadyside about gerrymanding. Stephen Caruso | Assistant Visual Editor

Sue Broughton likes squiggles. And as a speaker for Fair Districts PA, she gets to show concerned voters a lot of them.

Fair Districts PA, is a non-partisan activist group against gerrymandering — when a political group moves the boundaries of electoral districts to help their own election odds or to hurt their opponents — which formed a year and a half ago.

Broughton’s favorite example of the practice is Pennsylvania’s 7th U.S. Congressional District — which includes the Philadelphia suburbs. As a map projects behind her, she shows the room its twisting, turning borders that cut through five different counties, carving up Philadelphia suburbs and farmlands alike. Broughton said it looked like “Goofy kicking Donald Duck.”

The crowd of 80 sitting in Oakland’s Rodef Shalom’s auditorium laughed at her description. They were gathered at the event — hosted by Rodef Shalom and Temple Sinai to encourage “social action” — to learn about gerrymandering, a vintage American political weapon made more dangerous by technology and money. The group planned to raise awareness and lobby their legislators to stop it.

The meeting was centered around an hour-long talk by Broughton, 70, who recalled her start in activism as an environmentalist in the 1970s. Her biggest lesson from her younger days are that to enact change, it takes more than energy and ideas — it requires knowledge of how to pass bills.

“If you don’t understand the legislative process … you’re at a disadvantage,” Broughton said.

In America, gerrymandering has swung elections since at least the early 1800s. The name was first used in a newspaper political cartoon after Massachusetts Governor Elbridge Gerry, elected in 1812, drew an electoral district favorable to his party that was compared to the shape of a salamander.

Politicians are able to shape electoral districts at both a state and federal level because districts are usually drawn by state legislatures themselves.

Seven U.S. states — including California, Arizona and Idaho — create their congressional and state districts by an appointed committee. Another seven, including Pennsylvania, use a committee to design only their state representatives’ maps.

Districts are redrawn every ten years, at the same time as the U.S. Census, to accommodate shifts in congressional delegations based on state’s populations.

Many times, these committees are appointed by elected officials and so may still draw partisan political maps. In 2011 to 2012, the state Supreme Court threw out Pennsylvania’s redistricting map made by its redistricting committee. Pennsylvania will redistrict again in 2020.

Josh Schuneman, 29, of Friendship, has known about gerrymandering ever since he saw a Daily Show segment a few years back. As an independent, he cares about the issue as a way to restore power to the common voters.

“The only way we’re going to find a solution is grassroots like this,” Schuneman said, looking around the room of concerned citizens.

In her talk, Broughton said, although gerrymandering was common in U.S. history, it became an issue worth acting on because of modern data mining techniques and piles of super-PAC money. Combined, these let parties draw new electoral maps with pinpoint precision, making districts with as many loyal voters as possible.

“The party in power draws maps as they want them,” Broughton said.

Despite being a Democrat, Nancy Glynn, 52 of Wilkins Township, said the issue is bipartisan. She recognizes that even if Pennsylvania is gerrymandered by Republicans, Democrats abuse it in other states.

Glynn, one of the hosts of the event from Temple Sinai, thought fighting gerrymandering was important because as long as it exists, both parties will say “I’ll gerrymander you now, you’ll gerrymander me later.”

To end the vicious cycle, Fair Districts PA’s goal is to pass Pennsylvania Senate Bill 22 and make it an amendment to the state constitution. The bill would let independent, private citizens, not elected politicians, draw district borders.

To become part of the state constitution, the bill has to pass the state legislature twice, then win a public referendum. Fair Districts PA hopes to accomplish all of this by 2020 for the next redistricting cycle.

Some attendees seemed more optimistic than others about reaching the goal. But for Glynn, a Pitt faculty member who’s still upset about the outcome of the 2016 election, the goal seems worthy of a fight.

“It’s going to take a lot of hard work a lot of communication, but why not? Let’s go for it,” Glynn said.