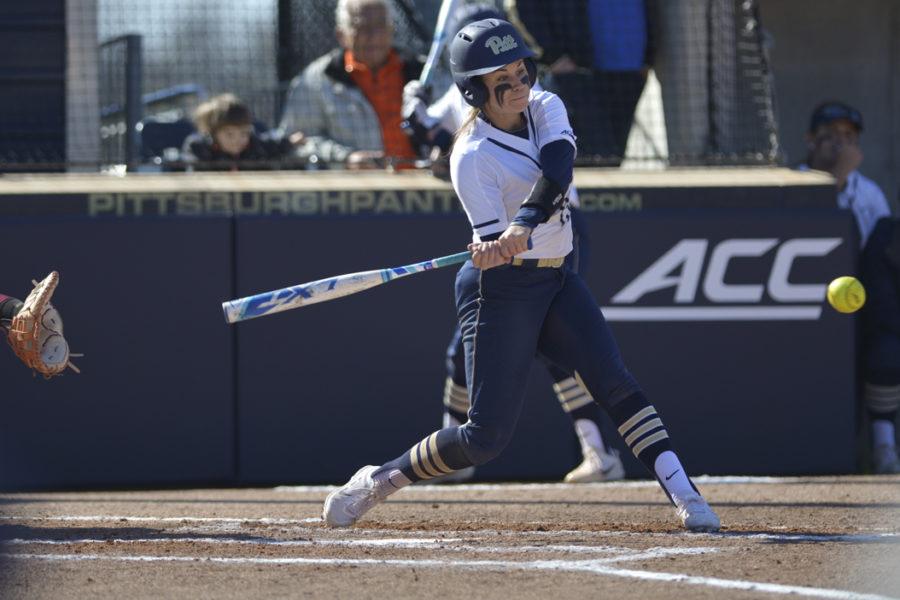 By Brandon Glass | For The Pitt News

The Pitt softball team likely will not reenter the Top 25 rankings this season, but with this weekend’s sweep of the Virginia Tech Hokies, the Panthers gained three critically needed in-conference wins.

Pitt (21-16, 4-11 ACC) started an extended home stretch by winning back-to-back in-conference games for the first time this season. After the Florida State Seminoles mercy ruled the Panthers twice in last weekend’s series, the Panthers found themselves in a position to give mercy to Virginia Tech (15-24, 5-13 ACC).

“You always want to capitalize when someone opens the door a little bit, you want to be able to kick it through and come barreling through there with the whole group,” Pitt head coach Holly Aprile said after Sunday’s game.

The Panthers poured in 28 runs over the weekend while letting up only six runs in the three-game slate. Pitt took advantage and swept Virginia Tech, winning game one, 11-5, and game two, 9-1, of a doubleheader Saturday, and 8-0 Sunday.

The Panthers started the scoring Saturday in the bottom of the first inning. Sophomore Olivia Gray smacked a homer to center field to put Pitt up, 1-0.

Virginia Tech stormed back at the top of the second. After the first two batters had walked, the Hokies bunt singled to load the bases. After a single, an error and two more singles resulted in five runs for the Hokies, Aprile took out junior starter Kayla Harris. First-year pitcher Brittany Knight vcame on in relief and stopped the bleeding with an inning-ending strikeout.

The Hokies scored five in the top of the second to put them ahead 5-1. But Virginia Tech wouldn’t see home plate for the rest of the game.

In the bottom of the second, the Panthers answered with four runs to tie the game at five apiece. Junior McKayla Taylor kicked off the scoring by singling to left field, bringing in junior Erin Hershman who reached on a bunt single.

Two batters later, Gray singled to right field, sending Taylor home. First-year Valerie Ortega then drove the ball out to right field, allowing both Gray and sophomore Alexis Solak, who reached on an error, to score.

In the bottom of the third, the scoring barrage continued. Ortega crushed a double to right center field, driving in three runs and giving the Panthers an 8-5 advantage.

After putting up an unearned run in the fourth, Pitt scored two more in the bottom of the sixth, putting the score at 11-5. Taylor homered to left field and first-year Hannah Edwards, after capitalizing on a Virginia Tech error, scored off a single by senior Kaitlin Manuel.

The Panthers’ bats stole the show, but Knight pitched brilliantly in relief, giving up only five hits and no runs in five innings along the way to her ninth win of the season.

The second game of the day made the first look like a warm-up, as Pitt continued its offensive attack. The Panthers managed to be on the winning side of the mercy rule in ACC play for the first time this year, as they downed the Hokies 9-1 in five innings.

Virginia Tech seemed to begin the game well, almost scoring in the top of the first inning. Harris, who started for the Panthers, needed some time to warm up as she gave up a single and hit a batter in her first 10 pitches. But the Hokies ended the inning with bases loaded and couldn’t convert baserunners into runs.

Pitt got on the board in the bottom of the second after Taylor homered with a full count to put the Panthers up, 2-0.

Virginia Tech managed its only run of the game in the top of the third off a one-out single by sophomore Emma Strouth to center field. But Harris stymied the Hokies offense by striking out the next two batters to end the Hokies’ scoring chances and the inning.

The home run barrage continued for Pitt in the bottom of the third, as the team hammered two in the frame. Pitt junior Giorgiana Zeremenko knocked a home run out to center field, bringing home two runners. The next batter, first-year Alexee Haynes, homered to left-center, bumping the score up to 6-1.

In the bottom of the fourth inning, the Panthers scored three times on Virginia Tech fielding errors. After the errors, and with the blowout in hand, both teams brought in the reserves for the top of the fifth as Knight retired the side to end the game early.

The Panthers completed the sweep in the third game from the circle and the batter’s box.

After shutting out the Hokies in five innings of relief the day before, Knight pitched a one-hit shutout Sunday. Meanwhile, Pitt managed to score eight runs in the first five frames en route to an 8-0, mercy-ruled game.

“They were just swinging at my junk,” Knight said after Sunday’s game. “I made them chase a lot.”

The scoring started in the bottom of the second when Taylor homered to put the Panthers up 2-0.

In the fourth, erratic pitching from the Hokies allowed Pitt to score. First-year left fielder Connor McGaffic walked before advancing to second on a wild pitch and to third on a ground ball. She seized her opportunity when she saw the ball get away from the Hokies’ catcher on a wild pitch, dashing in to score and give the Panthers a three-run lead.

The Panthers put the game away in the bottom of the fifth with a five-run, two-out rally.

McGaffic inaugurated scoring in the inning with a two-out single to left field, plating Hershman who reached base on a double off the left-centerfield wall. Sophomore Marissa DeMatteo then hit a single, setting up runners on first and second. Gray took a walk to load the bases for the Panthers.

Virginia Tech pulled its pitcher in hopes of getting out of the jam. But Manuel made the Hokies pay, hitting a single to send home two runners. Ortega singled out to left field, bringing home the final two runs needed to bring the mercy rule into effect and complete the sweep.

Pitt will stay home next weekend and host the Syracuse Orange (19-15, 3-9 ACC) in a three-game in-conference series at Vartabedian Field starting at 5 p.m. Friday, April 14.