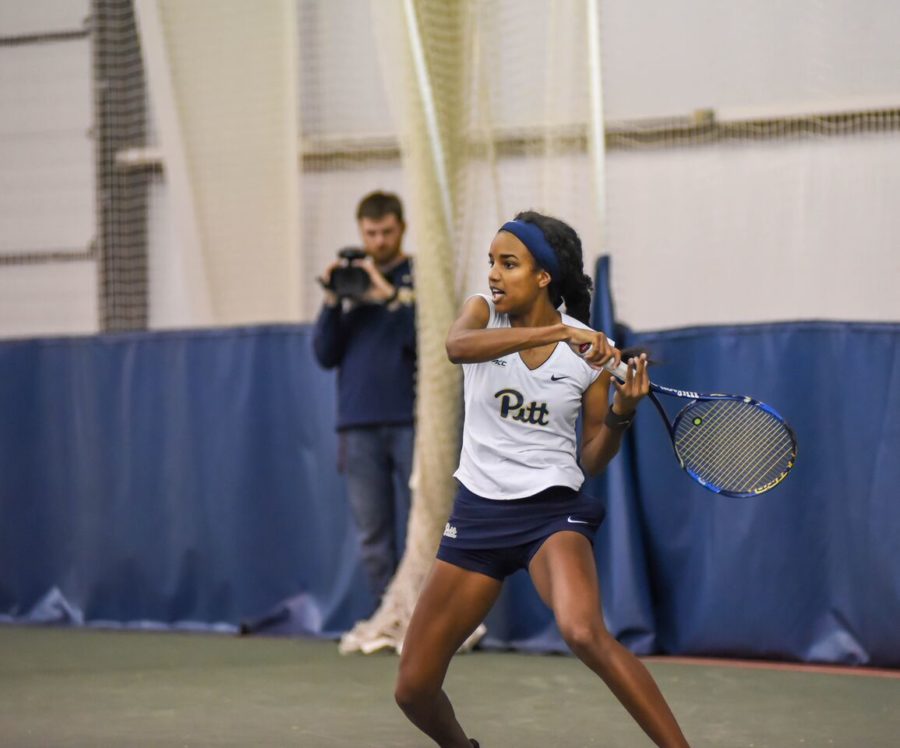 Redshirt senior Amber Washington beat No. 45 Kimmy Guerin in a three-set match during the game versus Wake Forest over the weekend. Matt Hawley | Staff Photographer

After dropping both contests during last weekend’s trip to North Carolina, the Pitt tennis team attempted turning its season around as it hosted No. 28 Wake Forest Friday and Virginia Tech Saturday.

The team had no such luck, as the Panthers lost two weekend matches to elongate their losing streak to eight and remain winless in the ACC.

The Panthers (3-12, 0-11 ACC) began the weekend by dropping their doubles point against the Demon Deacons.

The team of junior Callie Frey and sophomore Clara Lucas put up the stronger fight for the Panthers, but came up short in their 6-4 defeat. Sophomore Gabriela Rezende and first-year Jovana Knezevic lost 6-1 to complete the doubles sweep for the Demon Deacons.

The Panthers enjoyed marginally more success in the singles portion of the match, thanks to wins from Rezende and redshirt senior Amber Washington.

After dropping a close first set against No. 45 Kimmy Guerin, Washington rebounded in the second set after breaking Guerin’s serve and eventually winning, 6-4.

In the third set tiebreaker, Washington and Guerin fought each other evenly to 11 points apiece. At this point, Washington gained the advantage and won the next two points to win the set 13-11 and take the match.

Rezende fell into a 4-0 deficit against Anna Ulyashchenko in the first set, but battled back to win to by a score of 7-5. She lost the second set 6-3, but dominated Ulyashchenko in the tiebreaker, winning 10-1, grabbing a second, and final, victory for the Panthers.

Frey came the closest of the remaining Panthers to a win by forcing a tiebreaker third set, but she narrowly dropped it, 10-7, to lose the match.

Three other Panthers singles players were easily defeated in straight sets to seal the 5-2 victory for Wake Forest.

The Panthers began Saturday on a brighter note against the Virginia Tech Hokies with success in the doubles portion.

After senior Audrey Ann Blakely and sophomore Clara Lucas dropped their match, Rezende and Knezevic dominated their opposition, breezing to a 6-2 set win to put the Panthers on the board. After Washington and Frey took down Caroline Daxhelet and Francesca Fusinato, the No. 55 ranked doubles pair in the country, the doubles point belonged to the Panthers.

However, the Panthers quickly lost control of the match from that point onward.

The top three Panthers — Washington, Blakely and Rezende — all lost their matches in straight sets. In the No. 4 position, Frey fought her way to another three-set match, but again fell in the third set tiebreaker.

Lucas provided the only singles victory of the day for the Panthers with a three-set win. But she could not keep Pitt from dropping the match against the Hokies by a score of 5-2.

The Panthers will be back in action next Friday in Coral Gables, Florida, as they take on the Miami Hurricanes at 10 a.m.