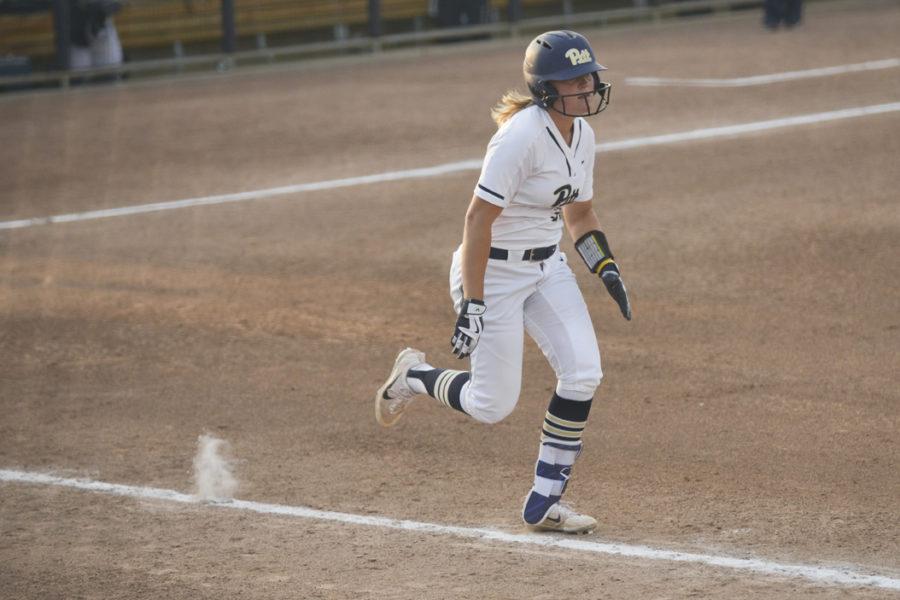 Alexee Haynes got a hit in both games of Friday's doubleheader, but the Panthers dropped all three games against Syracuse this weekend. Anna Bongardino | Staff Photographer

Going into the weekend series against the evenly-matched Syracuse Orange, the Pitt softball team expected a competitive game. After three straight losses, the Panthers came out to claim last place in the ACC standings.

The Panthers scored just four runs over the course of three games against the Orange.

But her offensive efforts alone were not enough and couldn’t prevent the Pitt softball team (21-19, 4-14 ACC) from being swept by the Syracuse Orange (24-15, 6-9 ACC) this weekend.

The Panthers began the first of their two games on Friday poorly, falling into an early hole against the Orange.

Junior pitcher Kayla Harris, who started in the circle for Pitt, could not find her rhythm in the first inning and finished the frame only after giving up four runs.

Harris began her outing by loading the bases with no outs, giving up two singles and a walk to the first three batters. The Orange capitalized, accruing two more hits before the end of the frame, including a bases-clearing double by first-year shortstop Hannah Dossett.

First-year Brittany Knight took the circle in the second, but the Orange scored one against her to extend their lead to five.

In the fourth inning, Syracuse loaded up the bases with one out. After an RBI single from junior first baseman Faith Cain, Aprile replaced Knight with sophomore Sarah Dawson.

Dawson managed to minimize the damage, only giving up one run and one hit before finishing the inning. But the Orange still enjoyed a seven-run lead by the middle of the fourth.

The Orange only needed six innings to defeat the Panthers. After scoring one more in the top of the sixth, the mercy rule came into effect and the seventh inning was ruled unnecessary.

The Panthers were given a chance to extend the game in the bottom of the inning, but couldn’t score and the contest ended with an 8-0 Syracuse victory.

The Panthers managed just four hits in the game, including a single and a double from Zeremenko. Unfortunately for Pitt, none of these hits drove in runs and the team was shutout to start its three-game weekend set against the Orange.

The Panthers fared a little better in their second game on Friday, as the team avoided getting mercy ruled and scored its first run of the weekend. But the Panthers’ pitching couldn’t quiet the Orange’s bats and Pitt dropped the game by a score of 8-1.

Syracuse jumped out to another early lead, as senior Sydney O’Hara smacked a double to left field to put the Orange on top, 1-0.

But the Panthers tied the score in the bottom of the second inning after senior Kaitlin Manuel took a walk, forcing home the equalizing run.

From then on, Syracuse dominated the game.

After plating one run in the fourth, Syracuse hit two three-run home runs in the fifth and sixth, respectively, to take an 8-1 lead over the Panthers.

Knight took the loss for the game after giving up two runs on eight hits over 3 2/3 innings. But she still had a better day in the circle than Dawson, who allowed six runs on six hits over 3 1/3 innings.

Meanwhile, the Panthers managed just two hits in the contest as the team lost the series to the Orange with a game left to go.

For the third straight game, Syracuse scored in the first inning, putting the Panthers at an early disadvantage en route to a series-sweeping win for the Orange.

A double from Cain put the Orange ahead 1-0 in the first frame of the game.

After Syracuse scored one more run in the third inning, redshirt junior Olivia Martinez smoked one over the left field wall for a solo home run in the fourth, giving Syracuse a three-run lead.

In the bottom of the inning, Zeremenko attempted to claw her team back into the game by hitting a two-run home run over the center field wall to cut the Orange’s lead to one.

“I thought it was gonna be a pop up, I thought [the center fielder] was gonna catch it,” Zeremenko said of her fourth inning blast. “But then it started to carry, and I saw her stand up to the wall, then I saw her start to climb the wall and I was like,‘Oh gosh,’ and she gave really good effort but just couldn’t come down with it.”

Zeremenko smashed one more homer to center in the sixth to put the Panthers third and final run on the board. But Syracuse managed to plate four more runners over the game’s last three innings to complete the sweep over Pitt and win the game 7-3.

Knight finished her day in the circle after 5 1/3 innings, during which she gave up 11 hits and five runs, four of which were earned. Coming into the game in relief, Dawson pitched 2 2/3 innings, allowing two runs off four hits.

Next, the Panthers will travel to Columbus, Ohio, to take on the Ohio State Buckeyes Tuesday at 4 p.m.