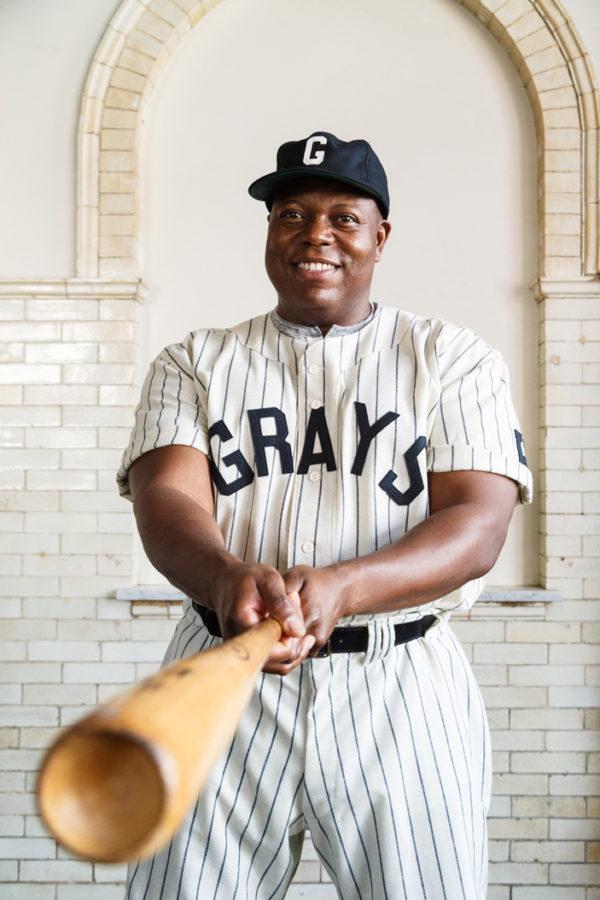 Gibson was called the "Black Babe Ruth" for his power-hitting prowess, and was inducted into the National Baseball Hall of Fame. Courtesy of David Bachman Photography

After decades of relative obscurity, a Pittsburgh legend will finally have his story told — albeit in an unlikely place.

Gibson is recognized as one of the greatest baseball players of all time and is the only player to hit a home run out of the old Yankee Stadium. But due to early 20th century racial discrimination, he never got the chance to play in the all-white Major League. Instead, he spent his career with the Pittsburgh Crawfords and the Homestead Grays, the city’s two Negro League teams.

The legendary slugger is notable enough in western Pennsylvania for a portrait on the walls of Oakland’s Primanti Bros. alongside other Pittsburgh sports heroes including Franco Harris, Terry Bradshaw, Roberto Clemente and Mario Lemieux. But his tale is less famous than Jackie Robinson’s, the first black man to break baseball’s color barrier when he took the field for the Brooklyn Dodgers on April 15, 1947.

Robinson was an exceptional ball player, winning the National League MVP Award in 1949 and the World Series with the Dodgers in 1955. Major League Baseball retired his number 42 league-wide on the 50th anniversary of his debut to honor his bravery for integrating the leagues, and he was inducted into the Hall of Fame in 1962.

But Robinson wasn’t the best player during his time in the Negro leagues — that honor was reserved for Gibson. Hall of Fame pitcher Satchel Paige, a legend in his own right who played with Gibson on the Crawfords, referred to Gibson as “the greatest hitter who ever lived.”

The statistics kept for Negro League games were spotty, so the exact number of home runs Gibson hit will likely never be known. But over the course of his playing career, which stretched from 1930 to 1946, baseball historians estimate that Gibson hit more than 900 home runs.

That’s more than Babe Ruth’s 714, more than Hank Aaron’s 755 and more than Barry Bonds’ 762, according to the Major League record.

Daniel Sonenberg, who wrote the music and co-wrote the libretto — the opera term for lyrics — said he’s glad Robinson has achieved such cultural prominence, but the fact that Gibson isn’t known in the same way just adds to the tragedy of his story.

“I think Jackie Robinson has arrived as sort of an icon of American culture,” Sonenberg said. “But at the same time, I get the sense that everyone thinks that the history of black baseball players started in 1947 or something. It didn’t.”

Baseball was Sonenberg’s first love, but after realizing he didn’t have much of a future as a pitcher due to his lack of command, he devoted himself to the study of music.

As a music major at Bard College in Manhattan, Sonenberg knew little about opera until his girlfriend at the time convinced him to dish out the $14 then required for standing room tickets at the Metropolitan Opera.

He fell in love with the genre and soon realized that the art form would be the ideal medium for telling Gibson’s larger-than-life story. He began work on “The Summer King” in 2003 and has been working on it on-and-off ever since.

“[Opera is] really a very emotional art form,” Sonenberg said. “The opera format allows characters to sing their innermost feelings and frustrations and emotions, supported by an orchestra in a very, very visceral way that I think is just ideal for a story like Josh’s.”

“The Summer King” is a defiantly non-classical opera, eschewing the typical Italian or German for an English libretto and incorporating more modern musical styles into the score.

In addition to teaching music at the University of Southern Maine and composing operas, Sonenberg played the drums in his rock band “Lovers of Fiction.” His eclectic tastes are evident in “The Summer King”’s music, and the score features elements of jazz, the blues and even mariachi for the scenes that describe Gibson’s playing days in Mexico.

“You can’t have a scene in Mexico without a mariachi band,” Sonenberg said. “There aren’t too many mariachi bands in opera, but we’ve got one.”

Gibson’s story requires the grandest of art forms because that was the nature of his life.

Born in Georgia in 1911, Gibson moved to Pittsburgh with his family when he was 8 years old. His father found work in the steel mills, and Gibson found baseball in the sandlots of the North Side.

Gibson soon attracted the attention of Cumberland Posey, the founder and owner of the Negro League’s Homestead Grays. At age 19 he started playing professional baseball for the Grays — and immediately started mashing home runs.

But just after Gibson’s career began and he started down the road to stardom, his wife Helen died in childbirth. He never remarried and devoted the rest of his life to baseball.

Over the years, Gibson turned increasingly to drinking and drugs and suffered from head-splitting migraines brought on by a brain tumor. At 35 years old, he died from a stroke in his mother’s Hill District home on Jan. 20, 1947, less than three months before Robinson broke into the majors.

Gibson’s painful and unceremonious death is featured prominently in the show. The climax of the opera comes in the second act when Gibson, played by Alfred Walker, has an imaginary conversation on his deathbed with New York Yankees Hall of Fame outfielder Joe DiMaggio.

Without the help of two Pittsburgh natives — Pitt history professor Rob Ruck and Gibson’s great-grandson Sean Gibson — Sonenberg’s dream may never have come to fruition. The two proved invaluable with regard to Sonenberg’s research into Gibson’s life.

Sonenberg met with both in 2007 when he visited Pittsburgh for the first time to add context to the story he was working on.

Ruck, who’s established himself as one of the nation’s foremost Negro League scholars with his books “Raceball” and “Sandlot Seasons,” gave Sonenberg feedback on an early version of the libretto.

On the same trip, Sean took Sonenberg to a Pirates game and showed him some of the old ball fields Gibson played on almost a century before.

Sean keeps his great-grandfather’s legacy alive through his work as the executive director of the Josh Gibson Foundation. The organization provides academic and athletic programs for underprivileged children in Pittsburgh and notably restored Ammon Field, the former Hill District home of the Crawfords now known as Josh Gibson Field.

After years of researching the Negro leagues, Sonenberg described his experience visiting the only city with two black baseball teams as similar to “going to Mecca.” But he’s not the only one to use religious terms to describe his journey toward making this opera come to life.

Denyce Graves — who will play the opera’s female protagonist, Grace — said Sonenberg was “born to write this opera” and that “he was a gift.”

“I believe that the gods chose him, he was the ambassador to bring this story forth because of the tenacity he has,” Graves said.

Such high praise from Graves carries more weight, considering her standing as one of the most sought-after opera singers in the world right now.

The Washington Post has described Graves as “almost too good to be true … a vital artist, a beautiful woman, a regal presence,” and USA Today said she is “one of the singers most likely to be an operatic superstar of the 21st century.”

One of the reasons why Graves and the cast are so appreciative of Sonenberg’s opera is that it gives black opera stars the rare chance to play black characters — drawing comparison to a similar racial hierarchy that left Gibson out of white-only leagues so many years ago.

Most operas have been written by Europeans and consequently, most opera characters are written as white. But for years, “color-blind casting” has been used in opera companies around the world, using voice as the sole determinant in the role-giving process.

But Walker said there’s something different about playing a black character as a black man.

“Sometimes you wonder before or after the performance how the audience will receive you [for playing a white character],” Walker said. “For example, I play the Flying Dutchman — and I ain’t Dutch. But being a character you naturally look like? It brings a comfort, and it brings a pride.”

For Sonenberg too — a lifelong Yankees fan — this opera is the actualization of a lifelong dream, one in which he’ll finally be able to raise the curtains on a man he’s always known as a legend.