Playing the streets: Pitt students take music outside of the classroom 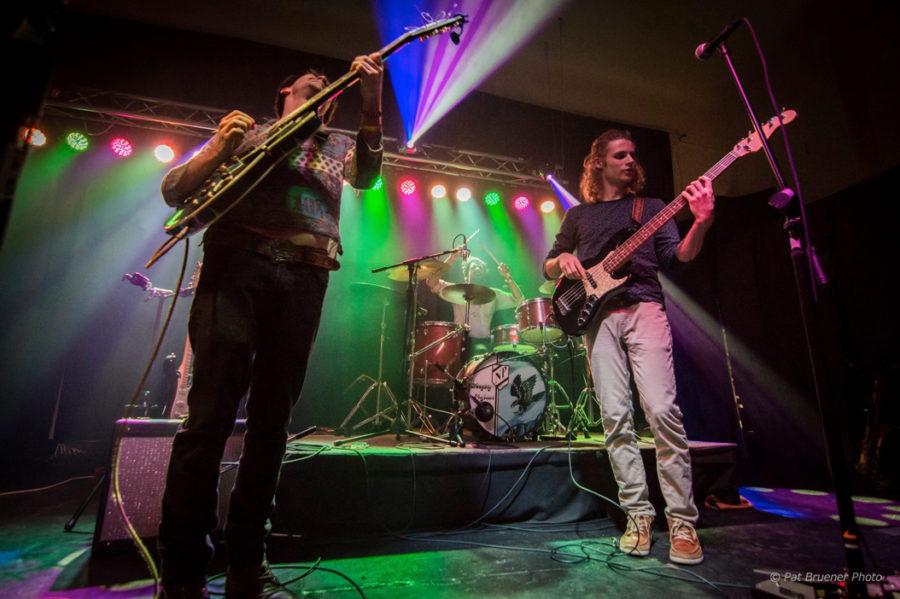 Shane McLaughlin and Aidan Epstein play at the James Street Gastropub and Speakeasy in North Side. | Courtesy of Pat Bruener

By Eric Heckler / For The Pitt News

Shane McLaughlin, a 24-year-old recent Pitt graduate, finishes singing his rendition of Bill Wither’s “Ain’t No Sunshine” to a group of strangers in Schenley Plaza on a 75 degree day in April.

Strumming an acoustic guitar, his case open in front of him, Mclaughlin gets a smattering of applause from the people listening and the crowd disperses, dropping $1 and $5 bills into his guitar case as they continue along their walk.

The musician often plays on the streets of Pittsburgh to make money. Busking — a term coined by musicians as a way to differentiate themselves from the average panhandler — is something McLaughlin has been doing for more than six years. He and his brothers used to busk in high school in Virginia.

“We had seen other people doing it when we were younger and always knew it was the next step in playing,” Mclaughlin said.

McLaughlin graduated from Pitt as a finance major in December 2015, and now works in sales for SolarCity, a solar power service company, but — like many other musicians carving out their own spaces for performance — also plays music in his free time.

During his time at Pitt, McLaughlin played guitar in Pitt’s Jazz Ensemble, a “big band” that usually consists of about 20 members who must audition to become a member.

Off campus, many members of Pitt’s jazz band — former and current — play in bars, restaurants, open mic nights or in the streets. Some of these musicians regularly busk in order to network with other artists, make a few extra dollars or just get a chance to play.

McLaughlin often busks by himself at Schenley Park and at the Roberto Clemente Bridge before Pirates baseball games. The big yellow bridge is closed off to vehicles on game days, and the foot traffic from people coming across from Downtown — in their Pittsburgh Pirates gear, excited for the game they’re about to watch — is an apt opportunity to make money.

McLaughlin is involved with a few different musical groups in addition to his busking. One of the groups is a band — Manic Soul — where he plays guitar with his friends Aidan Epstein on bass and Dhruva Krishna on drums.

“In the summer, I’m trying to do it as much as possible, because now I have an acoustic band,” McLaughlin said, referring to Manic Soul. “We try to have as many practices as we can outside, at least a couple of times a month, which is a way to busk at the same time as practice with the band.”

Ethan Dunbar, a Pitt senior who is majoring in music on the jazz track with a minor in physics, busks on the street with his saxophone a few times a month. Dunbar said street playing helps him network and that he gets recognized for it at some performances at restaurants and bars such as The James Street Gastropub and Speakeasy in North Side.

“I’ve met people [while busking] I’ve later played with, and some pretty cool people who are part of the same crowd,” Dunbar said. “But it’s fun to play what you feel instead of playing to impress.”

The best part of busking, in Dunbar’s opinion, is that people appreciate it. He typically plays in Shadyside because he can see and play in front of more than 100 people in just a two- or three-hour time span.

One day during his first year at Pitt, Dunbar went outside to practice the saxophone. He was asked by passersby if he had a hat or something to put money in and he opened up his case, a little surprised people would pay him.

Since his first busk, Dunbar continued to play his saxophone outside throughout his four years at Pitt.

While playing on the streets, McLaughlin also enjoys chatting with strangers — finding an audience-performer connection made more natural without the barrier of a stage or ropes.

“I was playing at the Pirates game and there was this woman walking her dog that stopped to talk to me about the game,” McLaughlin said. “We got to the point where she shared an intimate story about something going on her in her life, so I played her a song I had just written that she ended up loving.”

He’s also the assistant director of Pitt’s Jazz Ensemble and is involved in Pitt’s combo band — a smaller, more relaxed jazz group that offers a chance to stay connected to undergraduate students who need help bettering their music.

“After all my playing with groups, I still like to practice on my own as much as I can,” Epstein said. “I usually play anywhere from 15 to 17 hours a week total.”

Epstein co-hosts a jam session at the James Street Gastropub and Speakeasy every Sunday, where musicians can play without signing up. He also does other performances that aren’t necessarily jazz at many other clubs in Pittsburgh, fiddling between genres such as rock and afro-pop which helps him expand the type of music he’s comfortable playing.

Donning business cars with his name and number on them at all times, Epstein finds opportunities for gigs while performing. He also says Facebook is a great tool, as potential employers are able to look him up and contact him.

For Epstein, Dunbar and McLaughlin, playing outside of Pitt’s campus has created opportunities to play with professional players. Through networking, Epstein spent a few months being on-call for performances from famous Pittsburgh jazz player Lee Robinson.

“[Robinson] would call me and say, ‘I have a gig on this date, here’s the music, it pays this much, just show up and play,’” Epstein said. “It’s kind of a common thing to happen in the jazz scene.”

The three musicians all want to have a future playing and teaching jazz, but are enjoying the time now where they can find a spot in the sun, take out their instruments and brighten strangers’ days.

“When you go busking, you’re in a certain kind of headspace, and you never know who could be walking by,” McLaughlin said. “It can allow you to really connect with someone sometimes.”