Year in review: Five moments to remember in Pitt sports 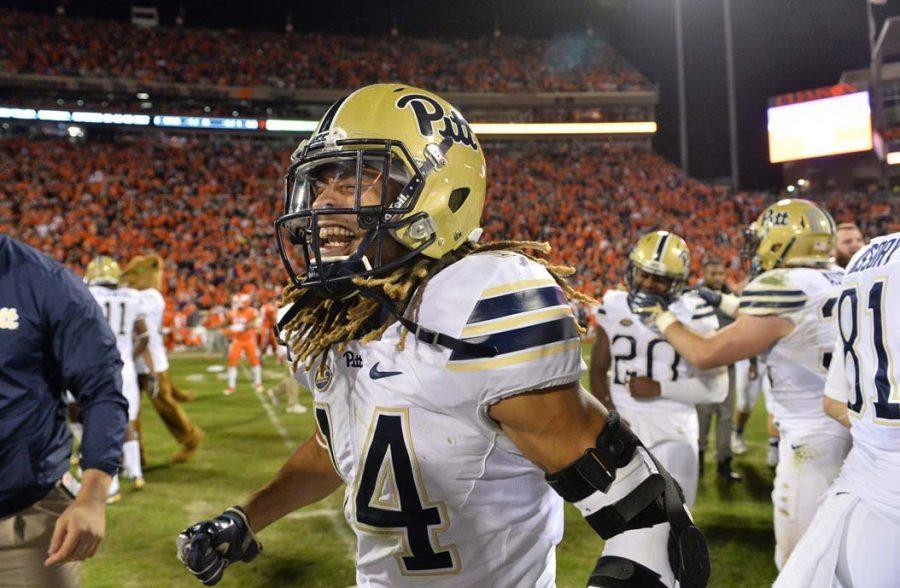 The 2016-17 academic year will go down as one of the most memorable years in Pitt sports for a number of reasons. Several varsity programs underwent transitions, as high-profile coaches and administrators came and went. The basketball programs stumbled, but the football and volleyball teams excelled, as the Panthers had plenty to celebrate on both an individual and team level.

Here are the five most significant moments from an unforgettable year in Pitt sports:

When Pitt running back James Conner found out he had Hodgkin’s lymphoma on Thanksgiving Day 2015, it was easy to wonder if his playing days were over. Returning to the football field in any capacity would be impressive, let alone starting in the team’s first game of the season.

Yet all through the grueling 12-week chemotherapy process, Conner continued to participate in the Panthers’ offseason workouts while wearing a protective surgical mask over his face. His goal all along? Returning in time for Pitt’s 2016 regular-season opener against Villanova Sept. 3.

Conner received a clean bill of health from Stanley Marks May 23, and on Sept. 3, he was the one leading the Panthers onto the field out of the Heinz Field tunnel. With his team of doctors and nurses from the Hillman Cancer Center on hand, Conner scored a pair of touchdowns in Pitt’s 28-7 win — setting the tone for yet another 1,000-yard, 20-touchdown season from one of the greatest running backs in program history.

Return of the rivalry

The week after Conner’s return against Villanova, the team’s focus had shifted to the Keystone Classic matchup against the Penn State Nittany Lions. Almost 70,000 fans packed into Heinz Field for a chance to witness the first battle in 16 years between the in-state rivals, and it didn’t disappoint.

The Panthers jumped out to a 28-7 lead in the first half, and seemed poised to blow the Nittany Lions out of the building and back to State College. But Penn State mounted a furious second-half comeback, and had the chance to tie or take the lead down 42-39 in the fourth quarter.

Upset of the year

In most years, defeating your biggest rival in such thrilling fashion and keeping them out of the College Football Playoff would stand alone as the most memorable game of the season. But roughly two months later, a reeling Panthers team traveled into Clemson’s Death Valley, where the undefeated Clemson Tigers hadn’t lost in more than two years.

Pitt’s high-powered offense matched the Tigers score for score, and a 70-yard interception return by redshirt freshman Saleem Brightwell set up a thunderous 20-yard touchdown run by Conner. But the Panthers’ two-point conversion failed, leaving Clemson ahead 42-40 with a little more than five minutes left.

After a crucial fourth-down stop by Pitt’s defense, quarterback Nathan Peterman led the Panthers on an efficient drive to the Tigers’ 31-yard line. Senior kicker Chris Blewitt then drilled a 48-yard field goal just inside the left upright with six seconds left, and Pitt escaped with a 43-42 victory over the eventual national champions.

When the University dismissed head wrestling coach Jason Peters midway through the season, many questioned what could have led to such an abrupt change in leadership. It turns out, an incident at a hotel during the team’s trip to Evanston, Illinois, for the Midlands Championships was the cause for Peters’ firing — though the University has still not explained his involvement.

Assistants Matt Kocher and Drew Headlee took over as co-head coaches for the remainder of the season, and Pitt floundered to an 0-3 start in ACC competition after losing its leader.

But the team recovered, as three Panthers took home individual ACC titles. Now, 2008 Pitt graduate and former national champion Keith Gavin has taken over the program, and the first-time head coach will have to establish a culture of discipline and accountability in order to succeed.

After Pitt Athletic Director Scott Barnes resigned to take the same position at Oregon State University Dec. 22, Pitt Athletics spent nearly three months without a full-time leader. The announcement of Barnes’ replacement, though, was nothing short of historic.

Lyke wasted no time getting to work, as she brought in several established candidates to interview for the Panthers’ head wrestling coach job before hiring Gavin April 14. Still, the glaring issue of the struggling basketball programs remains, something she’ll need to address moving forward.