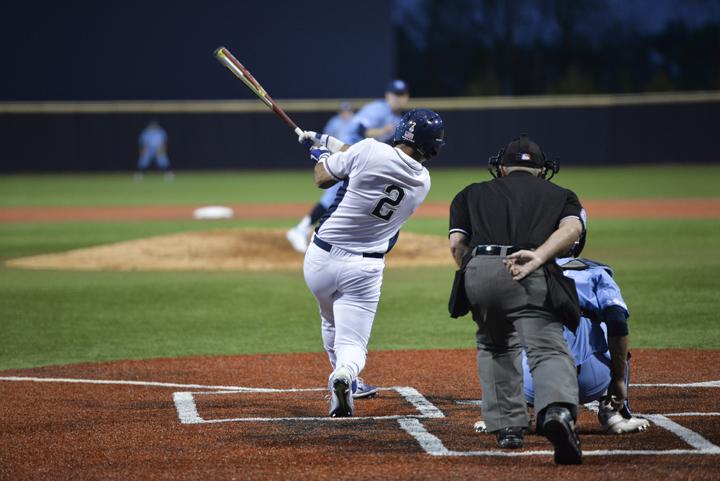 The Pitt baseball team came into this weekend with low expectations for its series with the highly-ranked North Carolina Tar Heels. But in the series finale, the Panthers rode an offensive explosion to knock off the No. 3 team in the country.

An early home run by redshirt senior Jacob Wright and three shutout innings from redshirt junior Josh Mitchell seemingly put the Panthers on their way to a series-opening victory. But the Tar Heels took the lead in the top of the fourth inning and held it for the remainder of the game.

Wright’s lead home run over the left field fence in the first inning put the Panthers on top, 1-0. Mitchell confounded the Heels for the first few frames, striking out four over three innings while scattering three hits and giving up no runs.

But his run of success came to a halt in the fourth inning when UNC made the Panthers pay for mistakes in the field.

North Carolina sophomore Brandon Riley singled to lead off the inning, but advanced to second after an error during a pick-off attempt by Pitt redshirt junior first baseman Caleb Parry. Two batters later, a single from senior Tyler Lynn plated the Tar Heels’ first run, tying the score at one apiece.

But Lynn advanced to second on a passed ball and reached third after a single in the next at-bat. The next batter walked to load up the bases with two outs, but Mitchell couldn’t close the door, giving up a two-run single to junior Logan Warmoth. At the end of the third, UNC led the Panthers 3-1.

Mitchell left the game in the next frame after giving up an RBI double to Lynn and hitting the next batter, junior Zach Gahagan, with two outs. Senior pitcher Sam Mersing closed out the inning for the Panthers, but the Tar Heels still led 4-1.

The two teams traded runs in the seventh innings, as an RBI single from Lynn in the top of the inning was answered by a single from Parry in the bottom half of the frame. But the Panthers could not plate any more runs as Pitt dropped the first game of the set, 5-2.

Senior pitcher Josh Falk dazzled in Saturday’s performance, taking a no-hitter into the eighth inning against one of the best offenses in the country. But the Panthers bats were almost as quiet, as Pitt recorded just three hits over the course of the contest. Falk couldn’t keep his team from dropping the second game — and the series — to North Carolina.

Over his seven innings of work, Falk walked just one while striking out seven Tar Heels. But in the eighth, Falk gave up the no-hitter — and three runs — to UNC.

Riley broke up Falk’s no-hit bid with a single to lead off the inning. Falk then hit the next batter and gave up a single to load the bases with no outs. He seemed to find his groove after retiring Gahagan on a pop up to second and striking out Freeman.

But senior catcher Manny Pazos let a pitch in the dirt get by him, allowing all three runners to advance and giving up the first run of the game. Falk could have stopped the bleeding with an out, but he instead gave up a two-run double to junior Brian Miller, giving the Tar Heel a three-run lead.

After two games of close-to-no offense, the Panthers avoided a sweep to the Heels with prolific scoring in a 11-9 slugfest.

The Panthers seemed destined for yet another loss after first-year Dan Hammer gave up four runs on five hits to Carolina. But the Panthers began to creep back into the game in the bottom half of the inning with an RBI single from senior P.J. DeMeo, making the score 4-1.

The Panthers shrunk the deficit to just one in the bottom of the second after Wright hit a two-run homer to left center — his second of the series.

But the Panthers took the lead in the third, exploding for five runs on five hits, and never gave it up.

Pazos plated the first run for the Panthers, bringing home Banman off an RBI single to right, and first-year Alex Amos followed him with a single of his own to take the lead, 5-4. The game broke open just a batter later when first-year Nico Popa tripled to right field, bringing in Amos and Pazos. Popa came home off a single from Wright and the Panthers ended the inning with a commanding 8-4 advantage.

Pitt put two more on the board in the fifth when a single from Parry plated two runners, and one more in the seventh as Pazos scampered home on a wild pitch to score the team’s 11th — and final — run.

But Carolina showed why it is the third-ranked team in the country by almost coming back from a seven-run deficit.

UNC scored for the first time since the first inning when Miller smashed a solo home run over the centerfield fence. The eighth was quiet for the Tar Heels, as first-year R.J. Freure retired the side in order. But after starting the ninth with a fly out, Carolina started hitting the ball all over the yard.

Freure put two on base before being relieved by junior Isaac Mattson. Mattson couldn’t record an out, giving up a walk and a three-run double before being taken out for Mersing. Mersing allowed two more hits and one more run, but was ultimately able to shut the door before UNC could put their Heels on the Panthers’ necks by completing the comeback and the sweep.

Instead, the Panthers walked off the field with an 11-9 win over one of the best teams in the country.

The Panthers will next host Southern Illinois University, Edwardsville, in a three-game, two-day series April 29 and 30.