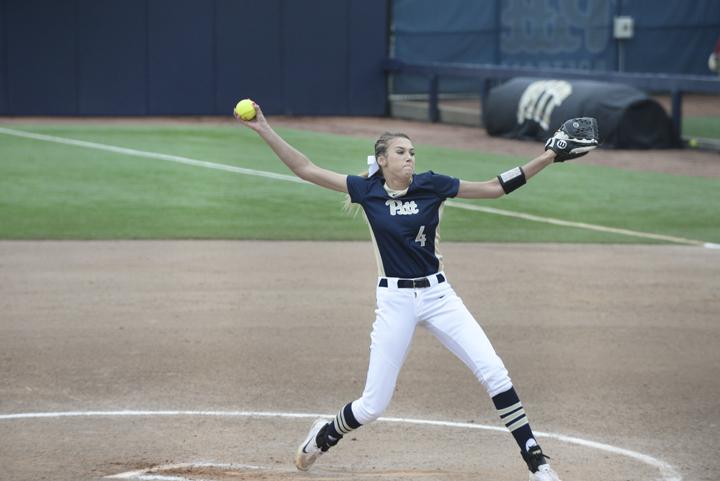 The Pitt softball team has experienced a somewhat disappointing year — seeing a 9-0 start turn into a 23-21 record — but senior Kaitlin Manuel walked off with a win on Sunday at Vartabedian Field.

Down three in the seventh inning, the team rallied to send the game into extra innings before first-year Kaitlyn Kruger hit a walk-off home run to give Pitt (23-21, 6-15 ACC) a 4-3 win over the North Carolina State Wolfpack (16-31, 9-9 ACC) in its final home game of the year.

The Panthers leaned on strong pitching in each of contest, as all three of the team’s pitchers — junior Kayla Harris, sophomore Sarah Dawson and first-year Brittany Knight — saw the mound against the Wolfpack. Knight led the group, recording two wins and improving her record to 12-11.

After Pitt got off to a commanding six-run lead during the first inning, the Wolfpack followed with an improbable comeback to win the game in extra innings.

Pitt then took a 3-0 lead after a Wolfpack error allowed Manuel and Zeremenko to come in to score. Things got worse for first-year Wolfpack pitcher Peyton Silverman, as Panther sophomore Alexis Solak hit a three-run home run over the left-center wall to give the Panthers a six-run lead at the end of the first.

After a scoreless second inning, NC State plated three in the top of the third with a two-run home run by senior Tyler Ross and an RBI-single by Alyssa Compton. Junior pitcher Kayla Harris entered the game with two outs in the third and recorded the third out to get her team out of the jam.

The teams traded runs in the next two frames, and after the fifth inning the Panthers had a 7-4 lead.

Pitt added to its lead in the bottom of the sixth, as Solak, junior Erin Hershman and Gray hit three consecutive solo home runs to give the Panthers a 10-4 edge over NC State.

Down to their last inning, the Wolfpack surged in the seventh. After cutting the deficit to four with nobody out, Ross came to the plate with the bases loaded. She crushed a pitch over the left field wall, tying the score at 10 apiece with a grand slam. In the bottom half, NC State’s Brittany Nimmo shut down the Panthers’ bats, forcing the game into extra innings.

In the top of the eighth, NC State loaded the bases with two outs. First-year outfielder Jade Caraway hit a bases-clearing double, giving the Wolfpack their first lead of the game. Pitt couldn’t respond in kind and the Panthers dropped the contest by a final score of 13-10.

The second game of the series delivered less action than the previous night — the teams combined for 12 hits compared to Friday’s 28 — but this time the Panthers were able to come out on top.

Knight and Dawson starred on Saturday, combining to give up only two runs. Knight earned the win after four innings, improving her record to 11-11. Dawson entered in relief and was able to put the Wolfpack away.

“I think our pitching definitely improved this game,” Knight said. “But our bats kind of tamed off towards the end.”

After two scoreless innings to start the game, the Panthers opened the scoring in the third on a three-run home run by Zeremenko. Later in the inning, Pitt had the bases loaded after hits by first-years Alexee Haynes and Valerie Ortega and a walk by Solak. The next batter, junior McKayla Taylor, smacked a single to left field, bringing Haynes home. At the end of the inning, the score was 4-0 Pitt.

The Wolfpack responded in the top of the fourth, capitalizing off a wild-pitch by Knight, which put runners at second and third, with a two-run double by first-year Haley Finn.

The Wolfpack were unable to complete the comeback for the second day in a row, as Dawson held NC State to just three hits over the last three innings, giving the Panthers the 4-2 win and tying up the series at one game apiece.

After nine innings of back and forth scoring, the Panthers won the final game of the series on a walk-off home run by Kruger.

Dawson started well for the Panthers in the final game of the series, giving up only one hit in the first two innings. But the Wolfpack inaugurated the game’s scoring in the third with a two-run, two-out double from senior Molly Hutchison. NC State’s Compton singled into left field, but the Panthers’ defense minimized the damage with a tag out at home by Ortega, assisted by junior center-fielder Erin Hershman.

After the inning, Pitt head coach Holly Aprile decided to bring in Kayla Harris to relieve Dawson. Harris pitched a solid fourth inning, but got into trouble in the fifth when she walked Hutchison to put runners at first and second with two outs. Aprile then made another pitching change, going to Knight for the remainder of the game.

Knight gave up a run on a single by Compton, but she avoided further damage. Going into the sixth inning, NC State held a 3-0 lead.

Neither team could get anything going offensively over the next few frames, as each lineup went down in order in the sixth.

“I thought our hitting would’ve been a little bit more consistent through the beginning of the game,” head coach Holly Aprile said. “But we had a really nice pitching performance.”

The Wolfpack made contact on a few of Knight’s pitches, but the defense was able to make the plays when it needed to.

Down to their final three outs in the bottom of the seventh, the Panthers had to improbably score three runs to avoid losing the game — and the series — to the Wolfpack. But after Taylor crushed a two-run home run over the center field fence, the Panthers brought the tying run to the plate.

With two outs, Hershman completed the Pittsburgh comeback, smashing a homer to right center to send the game into extras.

After a scoreless eighth, Kruger — who only had two career at-bats coming into the game — swatted a ball deep into right field. Her blast cleared the fence, giving the Panthers a walk-off 4-3 win and a weekend series victory.

“Ending my career here, at Vartabedian Field, on a walk-off home run hit by a freshman, who has maybe batted five times, is so, so remarkable,” Manuel said. “I’m so proud of her, and I’m so happy for her.”

After a week off, Pitt travels to Atlanta to take on Georgia Tech from May 5-7 in the team’s last ACC regular-season series.