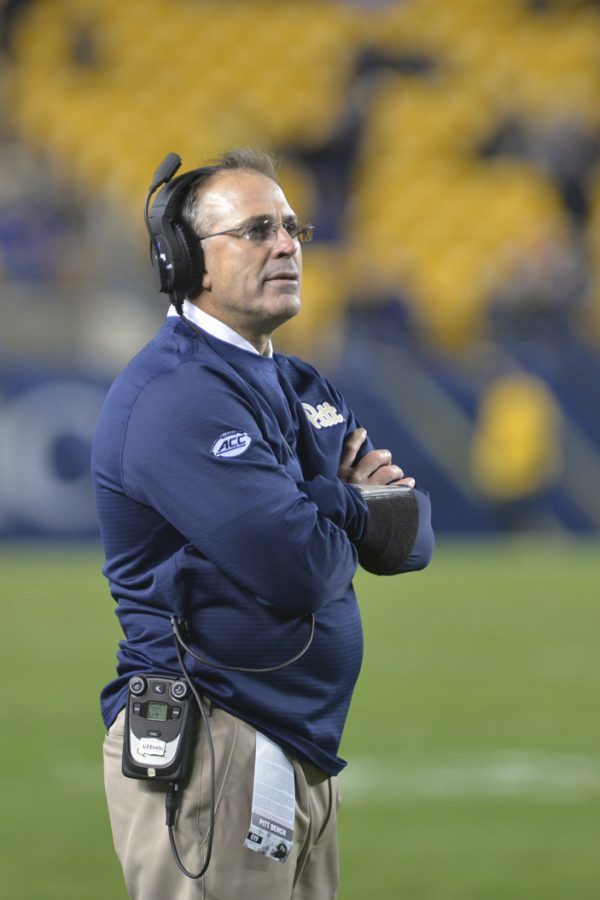 Pitt head coach Pat Narduzzi will have to replace many key players next season, as 11 Panthers were signed by NFL teams this weekend. Theo Schwarz | Senior Staff Photographer

Five Panthers were selected in this year’s draft — the most since 2011. Seven additional Panthers who didn’t hear their name called had to find a team through post-draft free agency. In total, 12 Panthers were picked up by an NFL team for the upcoming season — with three headed to the Steelers.

Bam Bradley signed with the Baltimore Ravens in the hours after the draft.

The 6-foot-2 linebacker arrived at Pitt in 2012, taking a redshirt in his first year on campus. In the 2013 season, he got his first on-field action, playing in 11 games and recording eight tackles and a fumble recovery.

Jarrett filled the middle of Pitt’s defensive line the last two years, eliminating running room for opposing running backs. In his junior year, he tallied 20 tackles, including two sacks. Last season, the media gave him an All-ACC Honorable Mention after he made 30 tackles in 10 games.

Senior defensive tackle Jeremiah Taleni was expected to replace Jarett this upcoming season, but Taleni was dismissed from the team for disciplinary reasons last week.

The Arizona Cardinals — after drafting Pitt offensive lineman Dorian Johnson in the fourth round— picked up their second Pitt player in cornerback Ryan Lewis.

Lewis came to Pitt in 2012 but redshirted in his freshman year. He played primarily on special teams until this year, when he won the starting cornerback role. He recorded 79 tackles in his senior season, adding one sack and eight pass break-ups.

Lewis’s most memorable moment of the year was his game-saving interception against the Penn State Nittany Lions on Sept. 10. Penn State threatened to take the lead with just over a minute left before the turnover.

The 6-foot-5 tight end enrolled at Pitt in January of 2013 and played in nine games in his first year, catching six passes for 50 yards.

In his junior year, he emerged as a reliable target for the Panthers, tallying 244 yards and five touchdowns on 13 receptions. This year, he was even more visible, catching 35 passes and averaging 16.5 yards per catch.

Defensive lineman Shakir Soto will join his fellow Pitt lineman Jarrett in Denver after the Broncos picked him up in free agency.

Soto joined the Panthers in 2013, playing in all 13 games as a true freshman. He became the team’s starting defensive end in his sophomore year but was relegated to a smaller role in 2015, starting only three times. In those two years, Soto made 54 tackles, including two sacks.

This season, Soto transitioned to defensive tackle and started 12 of the team’s 13 games. It was his most productive season, as he tallied 46 tackles, 10 of which were for a loss.

The Pittsburgh Steelers took another Pitt athlete on Saturday night in defensive back Terrish Webb.

A product of local powerhouse Clairton high school, Webb helped the team win its fourth state championship in a row. He came to Pitt in 2013, where he played in all 13 games as a freshman.

After earning a starting role in his sophomore year, Webb suffered a knee injury in the team’s game against Georgia Tech. He regained the starting role in 2015 and held it until the end of his Pitt career. Throughout his four years, Webb made 145 tackles and five interceptions.

The Detroit Lions signed wide receiver Dontez Ford to a contract shortly after the draft ended.

Ford first arrived at Pitt in 2013 after redshirting his freshman year at Syracuse University. His redshirt junior season was his most productive, as he hauled in 26 passes for 505 yards and two touchdowns alongside former Pitt receiver Tyler Boyd.

His output fell during the 2016 season due to a collarbone injury which forced him to miss five games. The emergence of wide receiver Jester Weah — who caught 36 passes for 870 yards on the year — also cut into his production.