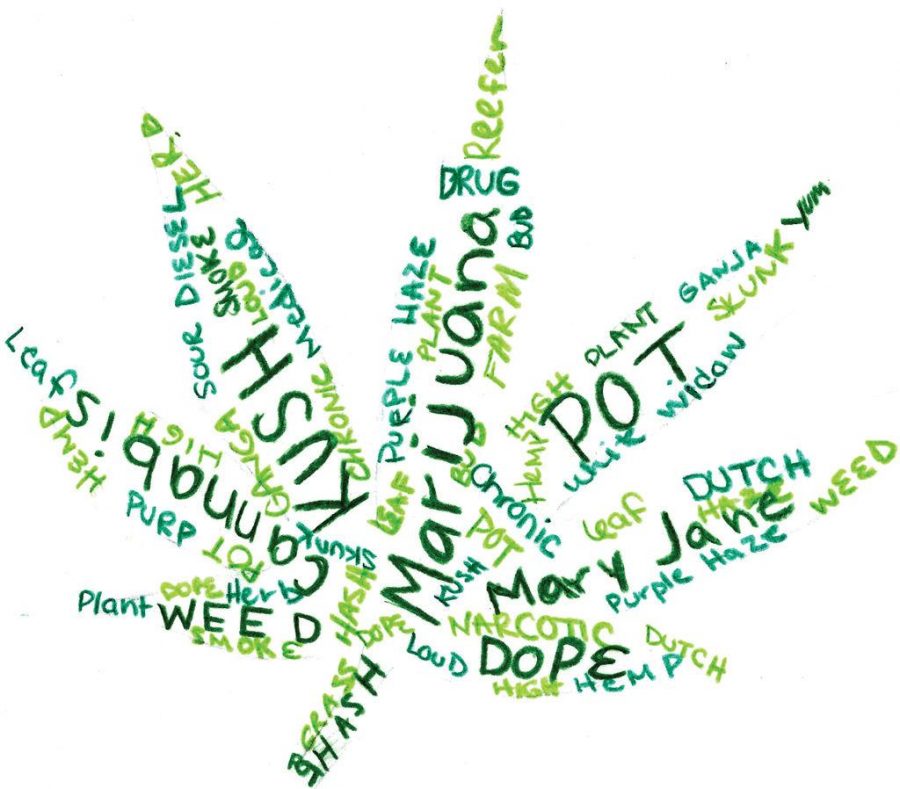 I still cringe when I remember my high school health teacher rattling off street slang for marijuana in her shrill, overly enthusiastic voice.

“Pot, weed, skunk, reefer, ganja!” she’d said with an undue smile, as if her life’s passion was to discuss slang for the Cannabis plant. As a class, we all shifted uncomfortably on our cold, plastic seats.

Beside teaching me the potential awkwardness of some interactions, health class illustrated that society loves to nickname its favorite herb. I’d always written this off as a Cheech and Chong brand of shenanigans — potheads say ridiculous things.

The etymology of marijuana lingo is more complex than jargon among the smoking-inclined, though — the slang is indicative of social and cultural change and creates a historical roadmap of the contemporary perception of marijuana. This dynamic dialogue dictates which words for the same seven-prong plant are carried over, replaced or restricted to certain regions.

The earliest marijuana vernacular includes “cannabis,” or “sativa,” which we now associate with more formal, medical terminology. Cannabis is Latin and originates from the Greek word “kánnabis,” which referred to hemp, according to “10,000 Years: An Etymologically Guided History of Cannabis” by Brian Grimmer.

The Oxford English Dictionary first referenced cannabis in 1548 as “common hemp.” In the 16th and 17th centuries, the French and British cultivated hemp in their colonies to make rope, cloth, paper and fuel.

In 1848, the Oxford English Dictionary updated cannabis as parts of the marijuana plant that are “smoked, chewed or drunk for their intoxicating or hallucinogenic properties.”

Marijuana’s rebranding from a practical industrial element to a psychological mediator reflects the time period between 1850 and 1915 when Americans could buy marijuana at pharmacies and general stores.

During the same era, “ganja” became another popular 1800s term for marijuana. Ganja comes from the Hindi word “ganjha.” Similar to the definition for marijuana in Western culture at the time, “ganjha” referred to a “powerful preparation of cannabis sativa,” according to the Online Etymology Dictionary. The movement toward coining ganja reflects the 1856 British tax on “ganja” and “charas” trade in India alongside the popular practice of hashish smoking throughout the Middle East.

In 2009, Eminem would come to revive the term. A track on his Relapse album titled “Must be the Ganja” repeatedly referenced marijuana as “ganja.” “It must be the ganja/ It’s the marijuana that’s creeping upon me while I’m so high,” he raps.

Up to the 1900s, though, people primarily referenced marijuana in terms of practicality – whether it was in regard to industrial hemp use, private use or trade. At the turn of the 20th century, not only did “marijuana” come into prevalence, but so did its negative stigma.

In 1905, The LA Times reported that a man attacked and killed a policemen while under the influence of a “marihuana cigarette.” The modern-day form of marijuana is anglicized from Latin American Spanish, originally spelled as “marihuana” or “mariguana.” Around 1910, at the onset of the Mexican Revolution, an influx of Mexican immigrants introduced recreational use into American society.

“Reefer” grew in popularity in the 1920s, derived from the Spanish word “grifo,” which more or less meant “dirty pothead.” Reefer — as a term for a joint — also comes from “reef,” or the horizontal section of a snail which looks like a rolled-up joint.

But just how did we reach the conclusion that it seemed sensible to name marijuana after a household kitchen container?

In the 1920s, “pot” evolved from the Mexican word “potiguaya” for marijuana leaves. That slang word probably came from the Spanish phrase “potacion de guaya,” which translates to “the wine of grief.”

The “marihuana cigarette” shooting, coupled with the “fear of brown people … [and] nightmare drugs used by brown people” eventually led to the “reefer madness” that propagated the mid-20th century, according to NPR.

The reefer madness of the 1930s and 1940s subsided in the 1960s when hippie culture commanded the U.S. Advocates of marijuana policy reform and users alike rediscovered the “Reefer Madness” film but treated it as satire, eventually reaching cult-film status. During this time period, the marijuana lexicon rapidly developed.

Hippies had an arsenal of words to refer to their main drug of choice. “Mary Jane” came from the Spanish name “María Juana.” “Grass” originally referenced the Hindu text Artharva-Veda which called marijuana “sacred grass.” In the 1980s, they called marijuana “the giggle plant,” “dope” or “hooch.”

In the ‘90s, “weed” gained linguistic prominence because the youth wanted to distance themselves from their parents’ use of “dope” and “grass,” according to Slate.

Today, teens and young adults have their own words for the greenery. A quick browse through the popular subreddit /r/trees on Reddit, a social community site, turns up words like “bud,” “loud” and “dank.” “Bud” refers to the part of the plant that’s smoked, while “loud” and “dank” are references to the strain of marijuana and intensity of THC, the psychoactive componenet of marijuana.

Cultural norms will continue to shape the way we think and talk about marijuana. With the upsurge of medicinal and recreational marijuana legislation in the U.S., our pot patois may evolve once again.

Maybe in 30 years, post-millennials won’t endure health class that asserts marijuana is an illicit Schedule I drug. They won’t listen to their 60-year-old teacher awkwardly lecture about the perils of “reefer” or “loud.” Instead, classes will discuss the benefits of cannabis for medical marijuana users. Or, at least, we can hope that this reefer madness will finally end.

Courtney Linder is the Assistant Opinions Editor of The Pitt News and primarily writes on social issues.

Write to Courtney at [email protected]