City School Board candidates debate ahead of primary 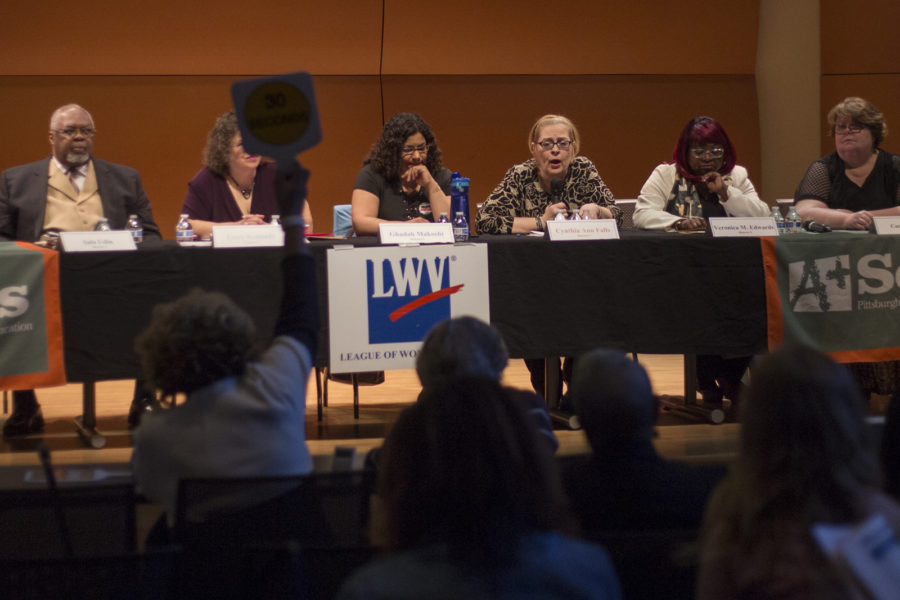 At a school board debate Monday in the Hill District, a moderator holds up a sign, alerting a candidate that they have one minute left to answer. John Hamilton | Editor-in-Chief

“Kids can’t vote, but you can,” read the signs and literature passed out at the door to parents and community members filing in the seats in the Elsie H. Hillman Auditorium in the Hill District Monday night.

The 50 attendees prepared to listen as candidates for Pittsburgh’s School Board made their pitches to voters in advance of the elections Tuesday, May 16. The forum, organized by community advocacy groups including the League of Women Voters and A+ Schools, drew candidates from districts around the city and touched on a variety of issues facing Pittsburgh’s public school system.

In District Five, which covers most of South and Central Oakland as well as several other neighborhoods to the south, candidates Terry Kennedy and Ghadah Makoshi presented conflicting viewpoints on the future of public education in the area.

Kennedy, the district’s incumbent representative, defended the work the Board had done during her tenure on controversial issues like student disciplining, charter schools and armed police in schools.

“As far as facilitating better communication, I already do that,” Kennedy said in response to a question about how she planned to improve communications between school bureaucracy and the families of students at charter schools if re-elected.

Makoshi, Kennedy’s challenger, proposed changes to school funding and smaller class sizes. She described herself as “absolutely against” the prospect of allowing public school police to carry guns in school buildings — a change the Pittsburgh Federation of Teachers has recently endorsed.

“There is a lot of misinformation out there,” Kennedy said of the proposal. “I’m not in favor of it, but I would be willing to consider it if it’s warranted.”

James Myers Jr. and Sala Udin, the two candidates for the vacant seat in District Three, which covers most of North and West Oakland as well as Garfield, East Liberty and parts of the Hill District, also voiced their opposition to armed police in schools. Udin called the proposal “one of the dumbest ideas I think I’ve come across in a long time,” and Myers added that it would create an atmosphere that “doesn’t look like education is happening.”

Myers and Udin, who are competing to represent a district with many more African-American students than District Five, focused much of their discussion on how to improve public schools in the city on racial issues.

Myers, who noted that he was a graduate of the public schools in the district, suggested that the persistent gap in scholastic achievement between black and white students in the Pittsburgh public schools system had to do with a cultural gap between teachers and minority students.

“You need educators that are actually reflective of the population of a school being served,” Myers said.

Udin, a civil rights activist and former member of the city council, was among the most animated of the forum participants, forcefully responding in favor of eliminating out-of-school suspensions — a proposal currently under consideration in the state legislature.

“What can a kindergartener do to justify getting suspended from school?” Udin asked the audience. “Maybe it’s not the kids in kindergarten. Maybe it’s the adults who are surrounding them that need the behavioral intervention.”

While candidates disagreed on how they would pay for their proposed programs, most agreed that relying on state and federal dollars would be politically unrealistic. Makoshi suggested that, to recover some of the education funding lost to cuts enacted by former Republican Governor Tom Corbett, voters would have to be more engaged in the political process.

“If we want people in Harrisburg to hear us, we have to go out and vote,” she said.

Makoshi’s sentiment echoed that of the organizers, who point out that many registered Democrats who voted in the party’s 2015 primaries did not cast a ballot for a school board candidate. Around 33 percent of Democrats participated in the last primaries, but only one in five voted on their school board election.

Though the event focused on local politics and the importance of voting, the night wasn’t free from the shadow of national politics. Virtually all candidates voiced their support for diversity programs as something important for schools to push for.

“The ignorance and fear around our country is the result of fear,” Makoshi said. “We have to teach our kids that what makes our country great is diversity.”