The next chapter: Conner’s story continues in Pittsburgh 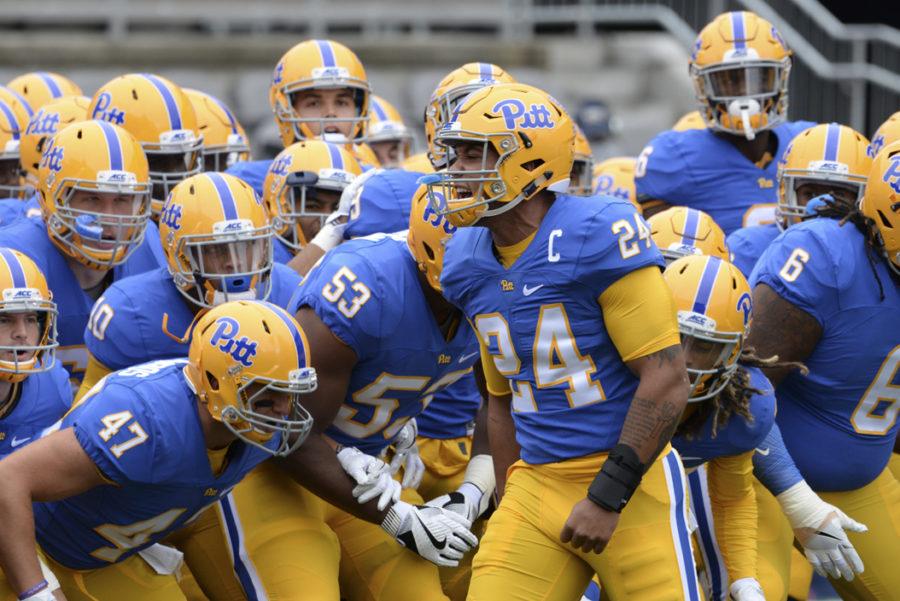 James Conner fires up the Panthers before their Oct. 8 game against the Georgia Tech Yellow Jackets. TPN File Photo

Sitting with friends and family in his hometown of Erie, Pennsylvania, James Conner watched as the NFL Draft progressed through the first three rounds.

Conner — a projected fifth or sixth round pick — probably wasn’t surprised he was still on the board. But as the night came to a close, the Pitt running back received the call he’d been waiting for — the second one in just under a year. The person on the other end made the call all the more special.

It was Mike Tomlin, head coach of the Pittsburgh Steelers.

“Congratulations to you and your family,” Tomlin said over the phone. “We’re excited for you, but more importantly we’re excited about you being a Steeler and chasing a championship here in 2017, and you’re going to be a big part of that.”

The moment shocked Steelers nation, sending Twitter into a frenzy. Pitt head coach Pat Narduzzi chimed in, saying on Twitter, “I don’t think you could script James’ story any better. It really sounds like a Hollywood movie.”

Just 11 months before Tomlin called Conner, letting him know he would be the first Pitt player drafted by the hometown team in 17 years, Conner received another life-changing call. This one was from Dr. Stanley Marks, letting the running back know he was cancer-free.

In high school, Conner played two hours north of Pittsburgh for the McDowell Trojans in Erie. He wasn’t responsible for running the ball though, instead squaring up on the defensive line.

In his senior year, Conner made 19 tackles — including five sacks — and one interception. He was recruited as a defensive end, rated a 3-star player by recruiting website 247Sports.

Pitt was the only Power Five school to offer him a scholarship, but he also had opportunities at four Mid-American Conference schools — Bowling Green, Eastern Michigan, Ohio and Toledo — and FCS Youngstown State.

“I was sacking guys left and right, but I guess college coaches weren’t all that impressed, because I wasn’t getting any looks from recruiters,” Conner wrote in an article for The Players’ Tribune in April. “Pretty much no one knew who I was, and they weren’t really trying to find out, either.”

Conner decided to commit to Pitt, enrolling at the University in the fall of 2013. He made his presence known right away, even though he was the team’s second-string running back behind junior Isaac Bennett. He led all backs in rushing yards and touchdowns, despite having 25 fewer carries than Bennett.

Arguably the most memorable game of his first year was the Nov. 9 contest against No. 23 Notre Dame. Conner ran for only 35 yards but scored two crucial touchdowns, one of which gave the Panthers the lead in the fourth quarter, leading them to upset the Fighting Irish, 28-21.

Heading into his sophomore year, Conner leapfrogged Bennett and took over as the team’s starting running back. His 2015 season was unprecedented in recent Pitt history. He won the ACC Player of the Year award and was named a first team All-American by the American Football Coaches Association.

On the way to winning the awards, Conner ran for 1,765 yards and broke single-season school records in rushing touchdowns, total touchdowns and points scored — passing Panther great Tony Dorsett in each category.

Heading into his junior year, Conner was the favorite to win the award again and was picked as a candidate for the Heisman Trophy. But in the opening game of the season against Youngstown State, Conner’s career came to a crashing halt.

Early in the second quarter, the defense tackled Conner after a nine yard gain, tweaking his knee on the play. He got up, limped off the field and sat out the rest of the game. At the time, the injury appeared to be a minor one.

“James is fine,” Pitt head coach Pat Narduzzi said in his postgame press conference. “[We were] just being cautious. [We] felt like we had a stable of backs.”

A few days later, an MRI revealed that it wasn’t a minor injury at all — Conner had torn his MCL and would miss the rest of the season rehabbing from surgery.

During his recovery process, Conner began to feel something still wasn’t right. He went back to the hospital, where doctors diagnosed him with Hodgkin’s Lymphoma — a cancer in the immune system. This shockwave stretched far beyond Conner’s football career, but what others perceived as a devastating blow he saw as just another hurdle to climb over.

“Fear is a choice, and I chose not to fear cancer,” Conner said at a press conference announcing his diagnosis. “We’re going to fight it, and we’re going to beat this thing.”

Over a six month period, he endured 12 rounds of chemotherapy. The treatment is a draining experience, but Conner would return to practice immediately following his sessions.

The running back wore a surgical mask while training and practicing, and he directed all of his energy outside the hospital towards football. In the process, Conner served as an inspiration to his teammates, driving them to work and compete harder.

My brother working @JamesConner_ #H2P cancer will not hold him back! believe dat #Respect #Warrior #24 pic.twitter.com/K1qedp5fua

“The thing that really motivates me is the days when he’s not there,” former Pitt offensive lineman Adam Bisnowaty said in a feature for the Ellen DeGeneres Show. “You know he’s in there getting chemo, and he’s sitting in a chair all by himself, and that’s when you start thinking, ‘I have to work harder for him today.’”

Others soon took notice of Conner’s tenacity and his story spread across the country. The Conner Strong phrase caught fire in Pittsburgh and nationally.

In addition to his appearance on The Ellen DeGeneres Show, he threw out the first pitch at the Pittsburgh Pirates Opening Day game and was featured on ESPN’s College Gameday before Pitt’s Sept. 10 game against Penn State.

In May 2016, Conner finally received the word he and his family longed to hear — he was cancer-free, and would be able to come back to football in the fall.

On Sept. 3, he officially returned, scoring two touchdowns in Pitt’s 28-7 win over Villanova. But still, the performance wasn’t up to his ACC Player of the Year standards.

“Me, personally, I have a lot of stuff to improve on,” Conner said in his postgame press conference. “It wasn’t a sloppy game, but everybody can get better, starting with me especially.”

Conner improved as the season went on, later saying he was at about 60 percent at the start of the year. There was a clear difference in his play at the end of the season, summarized by his 189-yard, two-touchdown performance in Pitt’s 43-42 upset win over Clemson. He was critical down the stretch, using a stiff arm to turn the corner on a 20-yard touchdown run with just over five minutes left to close Pitt’s deficit to two. After a fourth-down stop, the Panthers drove down the field and Chris Blewitt kicked a 48-yard game-winning field goal.

As the season came to a close, Conner said he didn’t know whether he would return for next season or declare for the NFL draft. On Dec. 10, he officially made his decision to leave the Panthers after four memorable years. But before he would leave, he had one game left — the Pinstripe Bowl against Northwestern.

Many hoped the game would be a victorious farewell for the cancer survivor, but it turned out quite the opposite. Conner left the game early with a head injury and the Panthers went on to lose 31-24.

Even though his Pitt career didn’t end the way he wanted, he still had a lot to fight for when it came time for the NFL Scouting Combine from Feb. 28 to Mar. 6. Statistically, he struggled at the Combine — his 40-yard dash, broad jump and vertical jump all ranked outside the top 15 among running backs.

But while numbers can mean a lot, they weren’t everything for the Steelers. This year, the six-time Super Bowl champions looked not just at raw talent but also personality and attitude.

“You hear [general manager] Kevin [Colbert] mention it all the time, hearts and smarts. A lot of these guys excel in those areas,” Tomlin said in a press conference following the draft. “They display a tremendous passion for the game in their play, and they’re smart, accomplished young men not only within the game of football but outside the game of football.”

Conner was one of those players, as he won both the Disney Spirit Award — given annually to college football’s most inspirational player — and the Brian Piccolo Award, which recognizes the “most courageous” player in the ACC.

So as Conner watched on draft day, the Pittsburgh Steelers were looking at him to boost their lack of depth at his position. The aging DeAngelo Williams became a free agent this offseason, leaving Le’Veon Bell as the only experienced running back on the roster.

When the call came in, his reaction was one of jubilation and relief. He leaned over, putting his head down as those around him cheered. Mark Soboleski — Conner’s high school coach — was there when Conner got the call from Tomlin. In his opinion, things couldn’t have turned out any better.

“That was something I’ll never forget, you couldn’t have written that whole scene any better,” Soboleski told GoErie.com. “Watching James through this whole process was almost heart-wrenching. I think it was grinding on him. I think he’s going to be a very angry guy that wants to prove something, the way he’s always played. Pittsburgh couldn’t be getting a better guy.”

The new Steeler isn’t wasting any time celebrating and is turning his attention toward helping his team win a seventh Super Bowl.

“I got the opportunity I wanted, and I’m ready to go to work right now,” Conner said to GoErie.com after the selection. “Let’s go. Let’s win the Super Bowl.”