The Pitt News • May 9, 2017 • https://pittnews.com/article/119549/arts-and-entertainment/rhythm-and-rhymes-local-poets-host-underground-readings/ 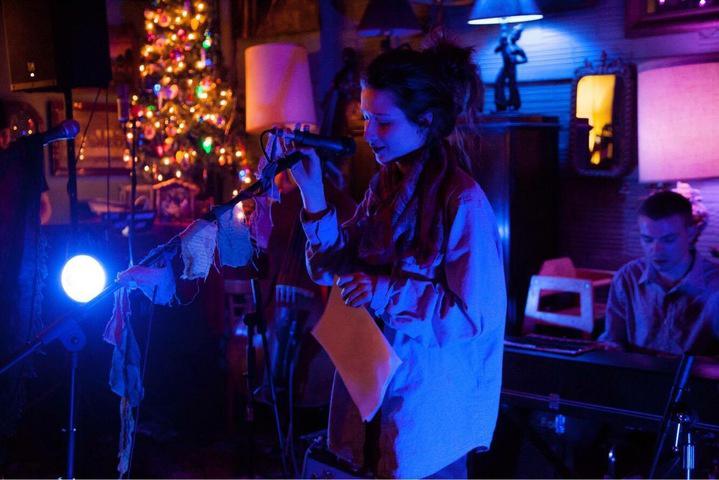 Emma Vescio mounted the stage in front of a crowd of nearly 50 people, surrounded by robust white columns, as shoppers quietly wandered the rows of bookshelves off to one side. Backlit by hazy purple light, she began to recite her latest work in a languorous tone, not far off from her regular speaking voice, but with an added rhythm and cadence.

The event — Sharing Women’s Stories — took place at City of Asylum on April 22. Hosted by Planned Parenthood of Western PA and Pittsburgh Action Against Rape, the event opened up the dialogue for artists to share personal stories and struggles related to contemporary discourse on women and their bodies.

The afternoon featured readings from Vescio, a local poet and community organizer, and Corrine Jasmin, an artist and writer with a bend toward youth culture and activism.

Jasmin added two additional elements to her own spoken word performance — a video projected on a screen behind her and the expressive dance movements of Dominique Brock beside her. Brock remained silent as Jasmin spoke to her, scolded her and embraced her, as though she were a projection of Jasmin herself.

Integrating different artistic mediums with poetry is a common theme among the young creatives in Pittsburgh, who are emerging at organized pop-up readings throughout the city. Local poets have taken to organizing readings themselves, whether it be in the living room of their home, the basement of a flower shop, a vegan restaurant or even a bar.

Sarah Thornton, who graduated from Pitt this spring with a degree in studio arts, recently had her first public poetry reading at City Grows, a garden shop in Lawrenceville.

Thornton has noticed that one of the key challenges which prevents poets like herself from forming a community is their natural inclination to be more reflective and less outgoing, an aspect which deters many from participating in readings of spoken word.

Without a poet daring enough to face the exhaustive process of networking and to organize these events, there would be no local poetry scene in Pittsburgh. In this regard, all roads lead back to Vescio.

Vescio, a rising junior English writing major who will transfer from Duquesne to Pitt in the fall of 2017, has always returned to writing throughout her life. Redfishbowl, a company that discovers artists and books them for performances, discovered Vescio’s poetry online this past summer.

Vescio’s topics for poetry have wandered from love to botany to space. Recently, she’s been fascinated by the fleeting quality of everyday conversations, jotting down exchanges after she has them in an attempt to hold on to a specific moment in time.

“Everything happens so fast, especially in college,” Vescio said. “Even your relationships and friendships with people are so quick that I feel like writing, and writing poetry especially, has helped me be able to keep these experiences.”

Many young poets in Pittsburgh will reference Vescio as the source for bringing poets together, namely for public readings she books herself. Recent locations have included City Grows, Studio AM in Homestead and City of Asylum — places where Vescio advocates for a section of the art community that is often drowned out by more established voices.

“I think a lot of the art and music scene around Pittsburgh is really dominated by men, and I personally would like a community of women or marginalized people to have a voice,” Vescio said. “Especially in poetry, because there’s so many different ways that you can speak and talk about your experiences through writing.”

She also wants poetry to be a more accessible form of expression, encouraging creativity surrounding everyday events instead of writers feeling like they need to come up with big, abstract metaphors in order to participate.

“I think everyone should feel comfortable writing — it doesn’t have to be so above everybody else,” Vescio said.

The importance of public readings lies not only in the ability to share work, but also to bring together these like-minded introspective artists to a place where they can connect with one another, providing feedback and constructive criticism for each other’s work.

“People stick around after readings and talk to each other, share opinions and ideas,” Thornton said.

The vulnerability of these reclusive artists sharing their work onstage, combined with the expression of big ideas of politics and religion, opens up the conversation for discussion when microphones are put aside and the poets are left to themselves.

“People are very apprehensive to go to a reading because I think it confronts a lot of your emotions that you don’t want to think about sometimes,” Vescio said. “I appreciate anyone who comes. It’s a very supportive environment.”

Fellow poet Madeline Barber, a rising senior majoring in theater arts at Pitt, referenced Vescio as a “foundation of the local poetry scene.”

Barber’s love of poetry emerged with their foremost love of performance in November of 2015, when Barber was handed the megaphone at a Transgender Day of Remembrance event at Carnegie Mellon and asked to speak for 15 minutes.

As Barber recited poetry to the students passing between classes, a crowd began to form, eventually erupting into applause by the time Barber finished speaking.

“A friend said to me afterward, ‘No one has ever been able to draw a crowd at the CMU quad before the way that you have. You have a gift here — you should do something with it,’” Barber said.

For Barber, the ability to read their work in a public setting allows them to view the audience’s reaction in real time, as opposed to submitting poetry to an editor and only receiving a filtered response.

Barber recognizes the poetry scene to be largely underground — many details surrounding time and location of readings are spread by word of mouth. Vescio has referred to it as a sort of subsection of the DIY scene. But with the help of community organizers like herself, it seems to be growing every day.

“It’s exciting to be a part of this blossoming community in the city,” Barber said.

Vescio and Thornton agree that poetry is one art form which significantly lacks the competition and profit-seeking elements of many other creative endeavors, leaving behind instead a form of pure expression along with the people who care about it.

“I personally care very deeply about poets and having exposure for them,” Vescio said. “I love them so dearly.”