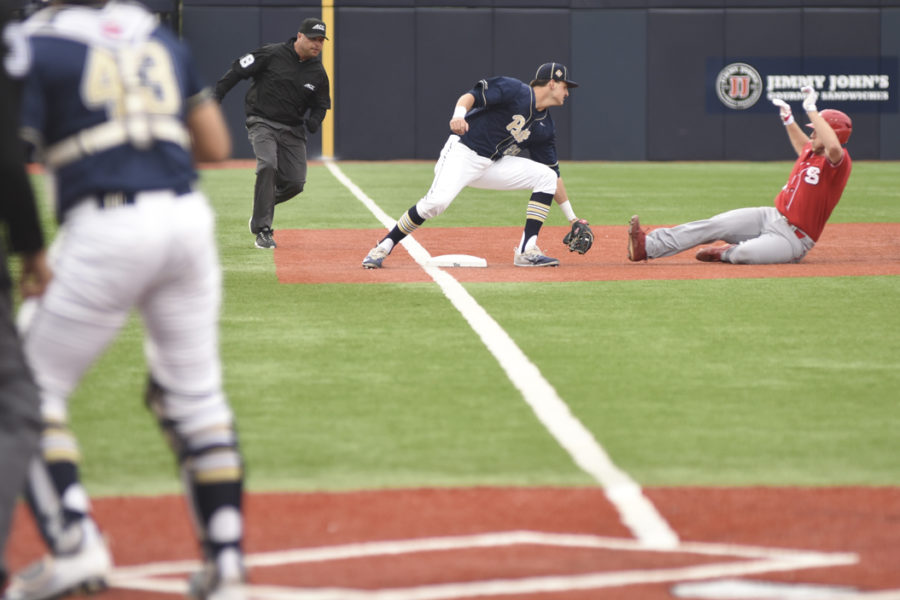 The Pitt baseball team had a chance to move off the bubble of making the ACC Tournament at home this weekend series against North Carolina State but were convincingly swept due to the high-powered Wolfpack offense.

Starting pitching woes led to Pitt (22-27, 8-19 ACC) having early deficits in each game, and the Panthers’ offense couldn’t quite muster up enough production for a full comeback in each matchup.

The series sweep places Pitt 13th in a tie for last place in the conference and caused the team’s already-thin ACC tournament hopes to dwindle even further. Head coach Joe Jordano acknowledged that but urged his Panthers to keep looking forward.

“We don’t dwell on what just happened. We are focused on what’s in front of us,” Jordano said.

The Wolfpack had won seven of their last eight games coming into the weekend, and they continued their winning ways Friday night with a 7-4 victory over the Panthers.

The Panthers got off to a woeful start, committing three errors in the first inning and allowing the Wolfpack to score three unearned runs. Senior catcher Manny Pazos collected the final out of the inning, catching a Wolfpack runner attempting to steal third. The play stranded two runners, keeping the game from getting ugly early.

Freshman infielder Will Wilson doubled NC State’s lead with a three-run homer in the top of the third inning. After three innings, the Wolfpack had a commanding 6-0 lead.

Pitt’s offense looked promising in the bottom half of the inning as the team put together a two-out rally. Redshirt senior Jacob Wright hit a double and freshman Alex Amos followed him with a walk. Both runners were left stranded though, as redshirt junior Caleb Parry flied out to right field.

Pitt redshirt junior pitcher Josh Mitchell gave up a solo shot to junior catcher Andy Cosgrove in the top of the fourth, bringing the lead to seven.

But Mitchell settled into a groove after Cosgrove’s bomb and didn’t allow another run in his eight innings of work. Pitt’s offense continued to have trouble, collecting only five hits through the first seven innings.

The Panthers finally did some damage in the bottom of the eighth inning. Amos drew a two-out walk and Parry followed with a single, setting the stage for redshirt junior Frank Maldonado to drive home Amos with a double.

The inning continued as Pazos hit a single, bringing home Parry from third and making the score 7-2. Senior infielder PJ DeMeo smacked another single, plating another run. The inning came to an end when junior Nick Banman struck out, stranding DeMeo and Pazos.

Sophomore Yaya Chentouf came in to relieve Mitchell in the ninth and pitched a scoreless inning. The Panthers had one chance left to come back, but the attempt fell short — despite scoring one on a sacrifice fly from Parry — and the Wolfpack won 7-4.

The Panthers looked to even the series on Senior Night, but another comeback attempt fell short and NC State took game two by a score of 8-6.

Junior first baseman Stephen Pitarra got things going early for the Wolfpack with a single. He was called out at second one batter later as junior Josh McLain hit into a fielder’s choice, putting a runner at first with one out. Freshman Brad Debo smacked an RBI double down the right field line, scoring McLain and giving the Wolfpack a 1-0 lead after the first inning.

Pitt started off hot in the bottom half of the inning, with Wright smacking an infield single up the middle. Amos put a sacrifice bunt down the first base line, advancing Wright into scoring position.

Wright stole third — his 11th steal of the season — and Parry drew a walk, putting runners at first and third with one out. Maldonado took the plate next and continued his hitting streak by smacking a hard hit ball down the left field line to score Wright and tie the game at one. Wolfpack pitcher Brian Brown didn’t allow anything more, striking out Pazos to end the inning.

NC State was all over Falk in the second inning, scoring a whopping six runs on seven hits. Senior pitcher Sam Mersing came in to relieve Falk with two outs, striking out Cosgrove to finally end the inning. However, the damage was done and NC State was up 7-1.

Pitt failed to get anything going in the bottom half of the inning, and Mersing handled the Wolfpack in the top of the third before Pitt started to cut into the lead.

With two outs, Amos jumpstarted the Panthers with a single to right field. Parry smashed a triple down the right-field line, scoring the speedy Amos from first to make it 7-2. Maldonado continued the inning by drawing a walk, but Pazos grounded into a fielder’s choice for the final out.

The next two innings were scoreless for both squads, but NC State took back momentum in the sixth when Debo crushed a solo home run over the right-field wall.

It seemed like the Panthers would go down easily, but the team fought back in the eighth, starting with a pair of singles from Amos and Parry. Maldonado reached on an error by Wilson, loading the bases with no outs.

Pazos hit a double to right center field, scoring two to make it 8-4. NC State manager Elliott Avent replaced junior pitcher Brian Brown with redshirt sophomore Tim Naughton, but he allowed two runs on his first two batters. Popa struck out to end the inning, but not before the Panthers cut the lead to two.

Pitt’s pitching staff held the Wolfpack in the top of the ninth, giving the team a chance to either tie or win the game in the last frame. But the offense could only muster one baserunner in the inning, and NC State won 8-6.

After the game, Maldonado — who extended his hit streak to 10 games — was still frustrated with the amount of losses piling up.

“I would rather go 0-for-4 and win a baseball game than have a 4-for-4 day and lose a game,” Maldonado said.

Pitt wrapped up its series with NC State on Mother’s Day, losing a lopsided 14-6 contest.

Panther freshman pitcher Dan Hammer struggled in the first inning, giving up two runs before getting out of the jam with a strikeout of sophomore Brett Kinneman and a foul-out by Wilson.

He gave up another in the second, but things completely fell apart in the third as the Wolfpack scored seven to go up 10-0. The inning saw 13 at-bats and three different Panther pitchers, while NC State collected five hits — including a two-run home run by Wilson — and three walks.

One inning later, freshman pitcher RJ Freure gave up an RBI double before Jordaon pulled him in favor of junior Isaac Mattson.

In the bottom of the fourth, Maldonado got Pitt on the board with an RBI groundout to second which brought home Amos. The team continued to claw back in the fifth, as Banman homered to right field to start the inning. Chentouf and Popa followed with singles of their own, and Wright brought home Chentouf with a double to make it 11-3.

Parry then brought Popa home with a groundout and Wright scored on a throwing error to cap off a four-run inning for the Panthers.

The momentum stopped there though, as NC State extended its lead to 13-5 with two runs in the top of the sixth on a pair of RBIs from Cosgrove and Pitarra. Each team scored one run the rest of the way, and the Wolfpack earned the sweep with a 14-6 win.

Despite the series sweep, there are some positives for the Panthers. Many freshmen are gaining valuable playing time, including Popa, who said the experience will pay off in the future.

“It’s awesome that he’s given me and a lot of the other freshmen a lot of opportunities,” Popa said. “It’s good because we have gotten a lot of experience, which will be helpful the next couple of years.”

Jordano also agreed with Popa’s sentiment, noting that it can be hard for freshmen to develop in a tough conference like the ACC.

“This is a very difficult league to be in from day one and gain experience because you are going to experience a lot of failure,” Jordano said. “It’s good and bad. The experience that [the young players] have gained are going to pay dividends come next year.”

The Panthers return to non-conference play Tuesday when they travel to Morgantown, West Virginia to take on the West Virginia Mountaineers in the Backyard Brawl. Next week, they conclude the season with a critical conference series against the Wake Forest Demon Deacons.