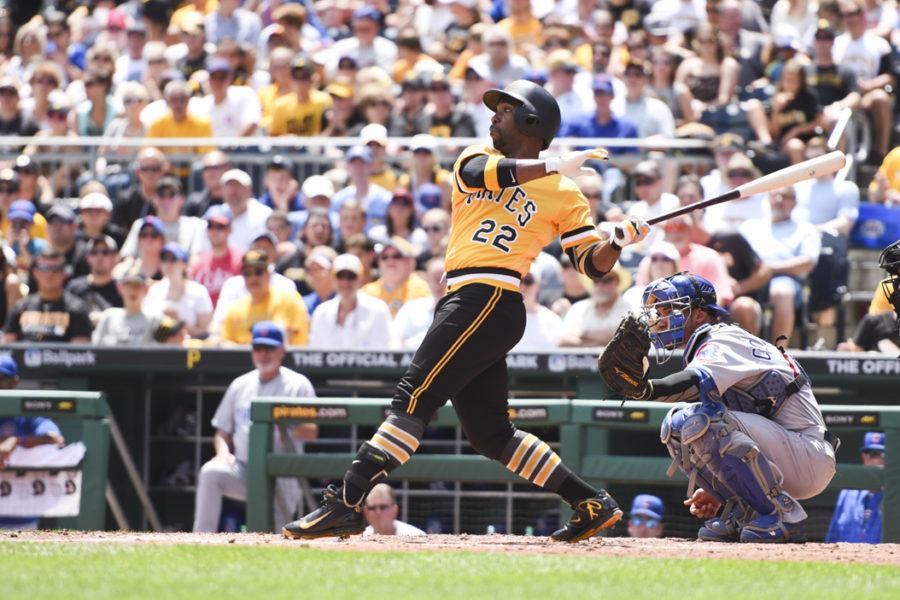 Andrew McCutchen, once one of the MLB's best players, is hitting just .212 this year, well below his career average of .290. Matt Hawley | Staff Photographer

The Pittsburgh Pirates — one of the most unsuccessful teams in sports until recent years — are officially stuck in mediocrity.

From 1993-2012, the Pirates suffered an unprecedented 20 consecutive losing seasons. The streak marked the longest of any professional team in the United States’ four major sports — football, basketball, baseball and hockey.

For the Pirates, the arrival of manager Clint Hurdle turned out to be the move needed to elevate the team.

In his first six years with the Pirates, Hurdle turned the organization around. In 2013, the team not only broke its losing-season streak, but qualified for the playoffs for the first time since 1992. They won the wild card game, advancing to the National League Division Series where they took the St. Louis Cardinals to five games, losing the series 3-2.

The Pirates made the playoffs in 2014 and 2015 as well, but lost in the wild card game both years to the Giants and Cubs, respectfully. Fans were disappointed by the losses, but given where the team was just a few years earlier, it was a surprise they were even there.

Hurdle has meant a great deal to the Pirates and Pittsburgh as a whole, but he hasn’t solved all the team’s problems — chiefly, its inability to get off to a strong start.

In Hurdle’s first seven years at the helm, the Pirates have been above .500 only twice after 30 games. In 2013, they started 17-13 and used the momentum to earn the aforementioned playoff berth. Last season, they began 16-14, but the team fell apart in June — losing 19 out of 28 games.

Outside of those years, the Pirates have gotten off to consistently slow starts in Hurdle’s era, giving them a tough task to catch the division leaders. Sure, it probably didn’t matter in 2011 or 2012 — when the team didn’t have the high expectations it currently does — but its effect was felt in both 2014 and 2015.

In those seasons, the teams started a combined 26-34, and each year they were forced to settle for the wild card spot come October. Unlike 2013, they couldn’t advance past the opening game, as they ran into two of the MLB’s best pitchers in the Giants’ Madison Bumgarner and the Cubs’ Jake Arrieta. The two pitchers dominated the games, with the Pirates unable to score a run in either contest.

But the thing is, the team shouldn’t have even been in those wild card games. If they had gotten off to a better start, they would’ve avoided the wild card game and might’ve stood a better chance at competing against the teams in a five-game series.

And who knows, if the Pirates win one of those series, maybe the organization turns the corner and joins the upper echelon of baseball.

It wouldn’t have taken much to earn a bye, either. They finished two games back of the Cardinals both seasons, mostly due to their fumbling start.

Some might point out the long, 162-game regular season and say the team has a while to bounce back and win the division. The team did bounce back — in both seasons — and still came up short.

In the 2014 season, April was the Pirates worst month with the team winning percentage sitting at just .360. They bounced in May, going 15-14, and were superb in June, winning 17 of 27. It was a similar situation a year later, except April was the second worst month — behind May. Over the next three months though, the squad was one of the best in baseball, compiling a 53-26 record. Both years their strong finish still wasn’t enough to place above the wild card slot.

True to form, this year the Pirates are again having a rough beginning to the season. As of May 16, they sit in last place in the NL Central with a 16-22 record. The offense has been largely ineffective, scoring the third fewest runs in the league.

It’s a troubling sight for a team with hopes of getting back to the playoffs, or at least above .500 after last year’s 78-83 finish. But under Hurdle, this has become the rule rather than the exception, so it’s not surprising.

Before the season even began, third baseman Jung Ho Kang was reportedly denied a U.S. Visa due to his third DUI arrest, causing him to miss every game thus far. Things got worse in April, as word came in that former All-Star Starling Marte was guilty of using performance-enhancing drugs. The MLB suspended him 80 games, keeping him out of the lineup until July 18.

Recently, the team’s pitching rotation took a hit when Jameson Taillon underwent treatment for a suspected case of testicular cancer. Missing Taillon forced Hurdle to insert Trevor Williams into the rotation with mixed results. He gave up six earned runs in a rough start against the Los Angeles Dodgers before bouncing back versus the Arizona Diamondbacks.

So with all the circumstances, the slow start is somewhat understandable. But there are still some aspects of the team performing below the standard — namely, the batting of Andrew McCutchen and Gregory Polanco.

The two outfielders were once the team’s premier players, but they’ve struggled in April and May. Polanco has been the better of the two, hitting .252 with 15 RBIs, while McCutchen, batting just .212, sits well below his career average of .290.

If the organization is to get back to the playoffs and become a legitimate World Series threat, the poor starts need to end. They can’t afford to sleepwalk their way through the first month of the season — even if they finish strong — if they hope to compete for the division title.

If these poor early performances fail to end, it might be a while before the group returns to the playoffs, wasting the Pirates’ only exciting era this century.