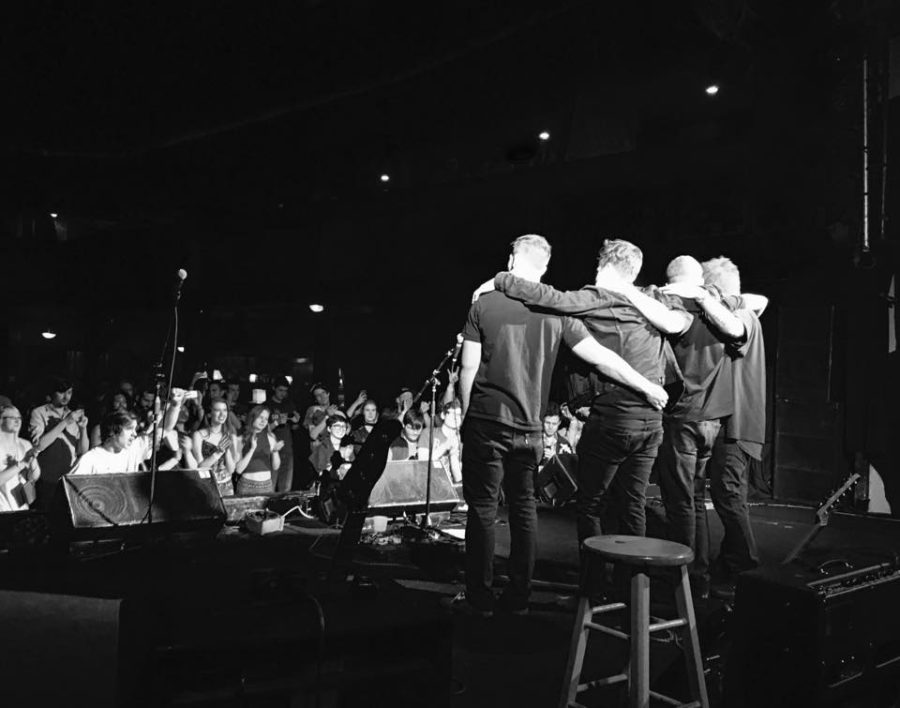 By Jack Mulligan / For The Pitt News

Pitt said goodbye to a musical fixture in South Oakland as O’Hara ended their set with a cover of The Killers’ “Mr. Brightside” to a boisterous crowd the Friday before spring graduation.

From their start in a basement on Parkview Ave. to their final show April 28 at Mr. Smalls Theatre, O’Hara created a space for itself in the Pittsburgh music scene with their emotional alternative rock sound.

The band, which officially formed in 2015, takes their name from O’Hara St. because of its short yet central location on Pitt’s campus and is felt by the members to be a just metaphor for their time in college.

O’Hara began as a few kids playing instruments together at Sternberg’s home in Bethlehem, Pennsylvania, over winter break in 2013. However, it wasn’t until two weeks into the 2015 spring semester that O’Hara came together as a four-piece band to play their first house show on Parkview to an exuberant group of close friends — solidifying their status as an Oakland party band.

Later in 2015, O’Hara won Pitt’s Battle of the Bands, which not only led to the foursome opening for American Authors and Magic Man at Bigelow Bash, but also gave Sternberg a glimpse of what the future for the band could hold.

“I not only saw us as a party band, but I saw us as having real potential,” Sternberg said.

Though they only had about a month to record and release original material between the Battle of the Bands and Bigelow Bash, O’Hara released their debut EP “Not Sure Yet” in 2015. Sternberg searched for places to record immediately after winning Battle of the Bands and eventually cut O’Hara’s debut project at a recording studio at Carnegie Mellon.

“I was like, ‘Hey, we have a few songs we would love to record … to release right before the show so that people can hear who we are and have an idea of what to expect when they hear us play,’” Sternberg said.

While they almost exclusively played covers at their first few 2013 shows, O’Hara later came into their post-punk revival sound with the release of two original EPs and one LP entitled “Millennials.”

Lyrically, O’Hara explores the angst of young adulthood over soaring and anthemic choruses. The band’s songs sound like they could be perfectly soundtracked to a film adaption of “Mysteries of Pittsburgh” by Michael Chabon, including lyrics peppered with specific references to places around campus.

“We wanted to maintain that fun element to us, but we also wanted to make music that represented us and our time at Pitt,” Sternberg said. “We wanted to include things that people experience in their everyday lives on campus and bring them into our songs.”

The connection the band has to Pittsburgh is undeniable, as the band owes their inception as much to Towers dorms — where they initially practiced their instruments together — as they do to the basements of South Oakland.

Their new EP, “The Ol’ College Try,” is drenched in nostalgia as the majority of the lyrics involve the angst of transitioning into adulthood and leaving college behind. These lyrics are crooned over progressively intense guitar-playing on the track “Moving On” featuring Johnny Wall.

The lyrical subject matter of “Moving On” is not so far removed from the emotions the band was experiencing as the members prepared for their last show before graduation — nostalgic for the experiences the members were leaving behind, but hopeful for new experiences to come.

The band’s farewell show was well-attended by dedicated friends and fans. The opportunity to play at a major Pittsburgh venue like Mr. Smalls stemmed from the O’Hara’s successful headlining show at the Club Cafe earlier this year. Booking Mr. Smalls as the stage for O’Hara’s farewell show came from Sternberg’s passion for Pittsburgh’s music scene.

“As a huge music-goer, I had probably been to five or six shows [at Mr. Smalls] and it has always been my favorite venue,” Sternberg said.

O’Hara decided to play their final show on April 28 — the night before the majority of the band members graduated.

Well over 100 fans attended the show in the 18th century Catholic church to witness the evolution of the band from its house show beginnings to headlining at one of Pittsburgh’s coolest venues.

The bands Searights, Some Kind of Animal, Portrait People and Wall all supported O’Hara at Mr. Smalls that night with Wall — a collaborator and fellow Battle of the Bands winner — joining the band on stage to perform “Moving On.”

“It was incredibly special,” Wall said. “They’re just themselves — they’re not trying to be anything except for O’Hara.”

The band maintained its signature house show sound and energy throughout the entire set. Benjamin Hoover, a fan who attended the show, said the crowd was as lively as the music.

“When O’Hara came on, everyone came up close to the stage and started to really get into the music,” Hoover said. “You could really tell that each member of the group left it all on the field.”

The 13 song set list pulled evenly from the band’s early work as well as the entirety of its new EP. The farewell set concluded with an encore of one of the band’s signature covers of “Mr. Brightside” by The Killers.

“Mr. Brightside is one of our go-to cover songs that gets everyone hype. People go crazy when we play that song,” said Sternberg.

Ending on such a high note was an emotional moment for O’Hara and their fans.

“There were a lot of people who were sentimental because a lot of the people who were at that same Parkview show … were actually at the show,” Sternberg said. “A lot of our same friends came out to support us. A lot of them had been to every single one of our shows before.”

Though the majority of the band’s members graduated at the end of the spring semester to pursue a variety of career paths, this is likely not the last time O’Hara will ever be heard.

“We should definitely take a short break — I would call it a hiatus,” Sternberg said. “Because I do think eventually … we will record something again.”

Sternberg hopes to use his marketing degree to pursue a career in the music industry and will continue to write music with O’Hara in mind.

“The future is bittersweet, but, at the same time, it’s also kind of exciting,” Sternberg said.