The Pitt News • May 25, 2017 • https://pittnews.com/article/119829/news/counseling-center-director-charged-possessing-child-pornography/ 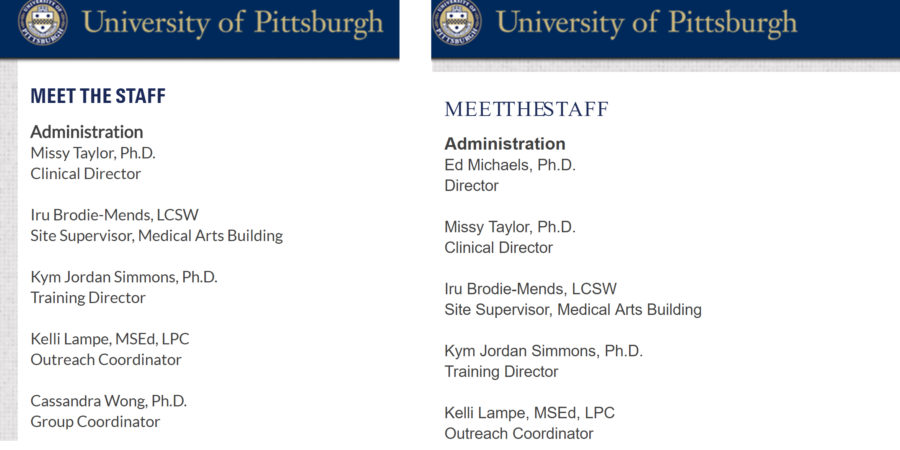 Edward Michaels' name was removed from the counseling center's staff webpage after he was arrested on charges of possessing child pornography Wednesday.

Allegheny County police arrested Michaels, 67, of Wilkinsburg, on charges of possessing child pornography and criminal use of a communications facility. According to a police criminal complaint, a Wilkinsburgh police sergeant found child pornography in his home on March 27 after the police received a tip. The sergeant seized two laptops, two memory sticks and several hundred loose photos.

County detectives reviewed the evidence on April 13 and found sexually explicit photos of what appeared to be prepubescent girls, according to the complaint.

A University statement said Michaels has been placed on leave and that Pitt is cooperating fully with authorities.

“We want to assure all students that your health and well-being is our top priority, and that the services provided by our staff in the University Counseling Center will continue unabated,” the statement said.

Shawn Ahearn, a spokesperson for student affairs which oversees the counseling center, did not respond to questions asking for further information about how the arrest will affect the center and referred The Pitt News to Pitt spokesperson Joe Miksch and Susan Rogers.

Michaels name has been removed from the staff page on the center’s website. Additionally, his bio is no longer available on the Student Affairs senior staff bio page, though a search of his name on Pitt’s website still brings up the page.

The now-removed bio said Michaels provides consultation to the University, particiates in several committees focused on student heath and gives presentations to students and faculty to “promote student well-being, mental health and functioning.”

The bio also notes that for 12 years Michaels was a “full-time member of the faculty of the child clinical psychology internship at Children’s Memorial Hospital.”

At Pitt, according to Pitt’s statement, Michaels served in an administrative role and did not see clients. However, Michaels did have power to approve additional counseling services for students, he told The Pitt News in November 2016, and played a large role in making changes to the center during his tenure.

Michaels started as director of the counseling center in June 2015 and has headed the center during a controversial period. Under Michaels, the counseling center was lacking a full-time psychiatrist from October 2016 to late March 2017. During this time, Anna Shaw, a senior psychology and gender, sexuality and women’s studies major, started an online petition criticizing the lack of a psychiatrist that received over 500 signatures.

Michaels started a task force when he was hired he said would address the mental health needs of Pitt students. The results of their survey, which he shared with The Pitt News in September 2015, found students’ highest priorities related to suicide prevention.

Michaels replaced Tevya Zukor in 2015 after only five years, and Zukor is now serving in the same role at the University of Mary Washington. Michaels’ possible replacement would be the fourth counseling center director since 2010.

When Michaels was hired in 2015 he told the University Times he sees “opportunities to make a big difference” at Pitt.

“[Pitt] is an organization that’s values-driven and that … requires people to behave to a standard,” he said. “You don’t always find that. A lot of universities, they steer a wide berth from that.”

His preliminary hearing is scheduled for June 1.

Editors note: This article was updated on May 28 at 8 p.m. to include information from the criminal complaint.