Biking in the ‘Burgh: a guide to bicycling on campus 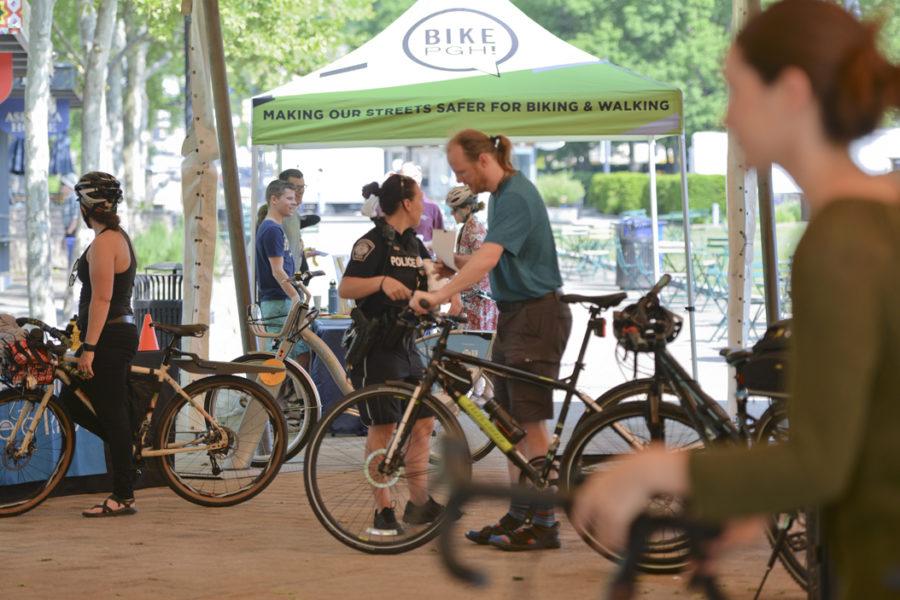 Bike PGH hosted an event in Schenley Plaza on the morning of May 19, National Bike-to-Work Day which was attended by several police officers and civilians. (Photo by Anna Bongardino | Visual Editor)

By Madeline Barber / For The Pitt News

Even in the summer, the crosswalk between the William Pitt Union and the Cathedral of Learning is filled with cyclists darting in and out of a sea of pedestrians heading to classes.

Groups on campus like the Pitt Bicycle Collective — who announced in February they would develop a bike co-op on campus — offer a number of ways to get you riding, whether your bike has one gear or 11, if you’ve been riding since you could walk or you’ve never owned a bike.

Bikes are everywhere in Pittsburgh, and for good reason — biking is a surefire way to stay healthy. A 2010 study from the National Institutes of Health on the health effects of cycling has shown that the health benefits for cyclists are numerous — a better sense of mindfulness, increased cardio exercise and having the benefit of low-impact exercise which means less strain on your joints.

When Kimmy Dinh, a recent Pitt graduate, first moved into their North Oakland home in 2015, their love of biking grew from necessity into what eventually became the PBC.

“I lived in North Oakland and wanted to get to campus quickly without having to walk twenty minutes,” Dinh said. “And that’s how I started biking. Then I moved even further away [to Highland Park] and I just love [cycling] more.”

According to Dinh, cycling in the city tends toward the exclusionary. The phrase “cycling community” often conjures up images of people in spandex and helmets racing through suburbia on bicycles with dozens of gears.

With the PBC, Dinh aimed to change that viewpoint. Sinjon Bartel, a junior mechanical engineering major, and Hana Swift, a senior studying studio arts, are current co-leaders of the PBC and they agree with Dinh’s assessment.

“When the Pitt Bicycle Collective first started, [it] was a space that was one of the first spaces for me that was a biking space that wasn’t white male-dominated, and that was really nice,” Swift said.

The collective first gathered a support group of interested students, faculty and staff and began working toward collaborations in the community with other bike-focused groups, like Bike Pittsburgh and Black Girls Do Bike  — a local bike group that focuses on empowering women, women of color especially — to get involved in the cycling community.

And — with the exception of Bartel —  the PBC is run by LGBTQ+ women.

“We’re all queer women. And we’re really happy about that,” said Dinh.

In its efforts to be as inclusive as possible, Dinh said the collective establishes an important support base on campus for cyclists new and seasoned alike. And through outreach, advocacy and collaboration over the past few years, the collective has given rise to a bike co-op — known as the Pitt Bike Cave — that will open on August 21, Bartel said.

Bartel’s vision of the Bike Cave paints a new picture for the cycling community on campus.

“[This would be like] community spaces that are open and […] volunteers would guide you through the repair — [it’s] all about teaching you how to make sure your vehicle can move you, sort of like empowerment through education,” Bartel said.

Empowerment through education is a hallmark of the cycling community in Pittsburgh — with Bike Pittsburgh and Free Ride Pittsburgh leading the charge in shaping the city’s bike culture through cycling races, bike advocacy and DIY opportunities to fix up bikes and learn how to be your own mechanic.

Cycling communities at large stand up to and come together in response to social issues. Swift said that bike co-ops are very closely tied to issues of social responsibility — even making sure to address issues of inaccessibility.

Elsewhere in the city, Pittsburgh Bike Share and Healthy Ride aim to promote personal well-being and encourage cycling as a healthier alternative for commuting as opposed to driving a car.

Accessibility for biking in the city can be seen as a double-edged sword, especially in terms of the Healthy Ride rideshares that are appearing throughout the city.

“Healthy Ride is accessible and inaccessible in a lot of ways. They’ve done a really good job about expanding it to areas where a lot of students at Pitt [live],” Swift said.

But trends show Healthy Ride locations in areas such as Oakland and the South Side, but fewer in areas with lower-income residents. Maps of Healthy Ride stations show dozens of stations each in Downtown and in Shadyside, while the Hill District, Homewood and Hazelwood have a total of one combined.

Being involved in the community also means ensuring bike accessibility, to the leaders of the PBC at any rate. They agree that there’s always more to be done with regards to bike safety and accessibility for cyclists.

“Because it is a college [neighborhood], it should be safer. Accessibility-wise — you can get from point A to point B, but there’s not a super safe way to get from South Oakland to North Oakland without going through the really big streets,” Dinh said.

While plans for bike lanes through Oakland have been made by the City of Pittsburgh and Mayor Bill Peduto, they have yet to come to fruition.

To Swift, there’s an onus on Oakland — as one of Pittsburgh’s busiest neighborhoods — to provide more for pedestrians and cyclists alike in terms of safety and commuting options.

Students new to Pitt or new to cycling have a number of opportunities to get involved. Pitt Bike Collective is revamping operations as the summer — and construction of the Bike Cave — progresses.

Bartrel’s advice to would-be cyclists is to find your comfort zone.

“If you’re not comfortable riding by yourself, find a friend who is, make sure that friend wears a helmet […] and start learning. It takes awhile to get comfortable in the streets, that’s part of it,” Bartel said. And Dinh offers advice on ways for new riders to get on the road.

“Going to Free Ride, going to group rides — those are usually pretty accessible to everyone. Everyone is super friendly,” Dinh said.

Swift encourages joining group rides that bike through the city as a great way for beginners to get comfortable on the streets. “You can pick up any group ride if you want on the weekend. Hop onto a group ride — they’ll take you around. You’ll learn what the safe ways to ride the streets are, which is really important,” Swift said.

In recent years, cycling in Pittsburgh has taken off. Bartel says that Pittsburgh had the largest increase in cyclists who commute in the last decade — an increase of over 400% in commuters in the decade from 2000 through 2010.

“Recently, [the community has] gotten very intersectional and it’s gotten more collaborative, which is good,” Dinh said. “In a city like Pittsburgh, that’s definitely needed.”

Rules of the Road

No riding on sidewalks in business districts – such as Craig Street in Oakland.

It is illegal to ride a bike in bus lanes in Pennsylvania.

A front headlight and rear reflector are required if riding between sunset and sunrise.

Cyclists must yield to pedestrians.

Cyclists are required to stop at red lights and stop signs.

PennDOT strongly recommends that you always wear a helmet.