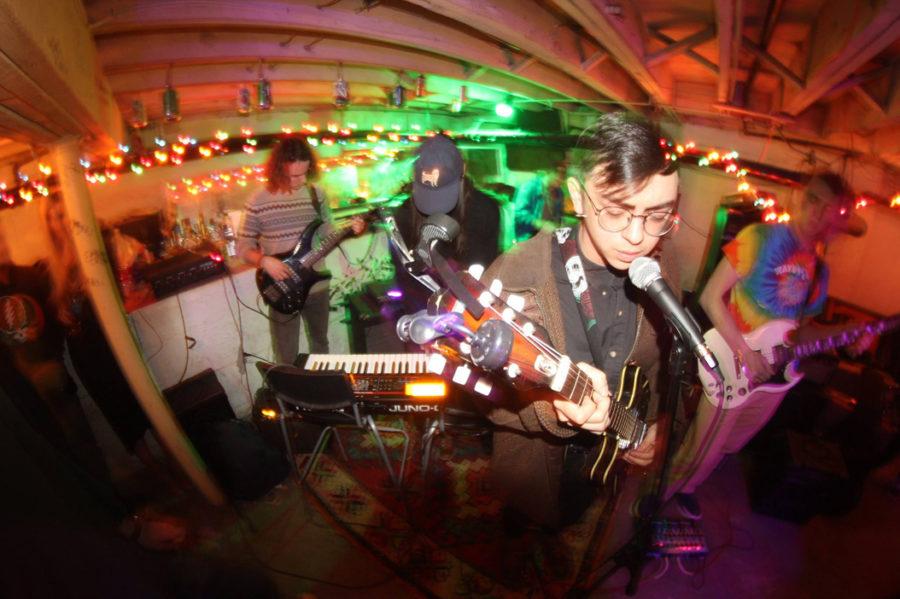 There were too many people, the music was too loud, the cooler was empty and it smelled like sweat.

I think that might describe every party I attended my first year of college. No matter where it was or who was there, I have no fond memories of piling into someone’s basement with what seemed like 300 people only to stand around, lose our balance and then trek home.

Thinking back on my first year, I wish I’d known then what I know now — that it doesn’t have to be this way. That having a social life isn’t inextricable from house parties. That for people like me, whose definition of fun relies more on music than much else, Oakland is home to a community of live music that provides experiences that far surpass even the best parties.

My friends and I get ready for house shows the same way, I imagine, the average student gets ready for parties. We don our freshest outfits — for the first show I went to, I wore my baggy camouflage pants with my favorite denim jacket, and my best friend wore vintage pinstripe overalls. We know we’ll turn heads — albeit maybe not because the general populus thinks we look as cool as we think we look — but we’re ready to go.

If this were my first year, at this point I would text my friends a message I hope to never send again.

“Yo do you have any addresses?” — the college way of asking if people know of any parties going on around town.

Sometimes not a single person would pull through and I’d have to either follow the sounds to overpacked houses or rely on friends of friends, but it still never felt like I was in control of my evening. For someone like me, whose reticence is amplified by uncertainty, this was a dealbreaker — by midnight, I was usually asleep in my Tower B bed.

But when I’d set off for a night out my second year, I didn’t worry. I swore off going to house parties when I moved off campus and instead committed to socializing how I wanted. I joined new clubs, like Pitt’s college radio station WPTS, and I started receiving Facebook invitations from these new friends to house shows at places with strange names like Dogfunk or The Bushnel, to see bands with even stranger names like Pinstripe Sunny or Zaki. These invitations came in advance, allowing me to take control of my evenings and the people I spent them with — a feeling that left me even more empowered than showing up late to parties crowded with strangers ever could.

When I arrived at my first house show, I didn’t know what to expect. The invitation simply placed the location as Dogfunk and said to message for the address. Was this some underground concert venue? Would it be hidden in the basement of an abandoned building? In a big grassy field? The address was somewhere in South Oakland, on a triangular-shaped block — not as if that helps locate anything in Oakland — and it looked like any other South O house.

I nervously and clumsily walked up the steep concrete steps and, imbued with courage by my Dogfunk-veteran friends, waved hello to the bouncers.

It turned out the nervousness was unnecessary. The bouncer and I were friends from WPTS. I paid my $5 more eagerly than ever, knowing that the money was supporting my friends who were there to play music for us instead of perpetually fueling alcohol-filled nights.

And when my best friend walked in behind me, she was charged the same exact amount. One of my biggest grievances with house parties is the unequal treatment of men and women, be it positive or negative. There’s always an admission fee for house parties — for boys, it’s usually $5, but for girls, it’s sometimes simply being a girl. Without fail, this gendered double standard evokes within me an uneasiness that stems from stories of predation and sexual abuse at parties.

But there was none of this at Dogfunk, nor at any other house show I’ve been to. Everyone is treated equally there — whether it’s your first time or you’re a veteran show-goer, whether you identify as male, female or nonbinary, whether you’re dressed like everyone else or not. You’re treated with the respect that everyone deserves.

House parties rely too much on mere socialization and I’m sure I don’t just speak for myself when I say simply that socialization is really hard. As a first-year, far too often I found myself sitting in the corner at the party, avoiding talking to new people because sometimes even the prospect of it fills me with anxiety.

So when I ducked my head under the basement stairs at Dogfunk for the first time, I was nervous. I wasn’t sure if I’d see a messy card table with red Solo cups, a flashy light setup or one dude on a guitar playing “Wonderwall.”

I saw none of these. What I did see were a lot of familiar faces — people I see around campus and marvel at their outfits, musicians I read about and admire, like Jack Stauber, and people I’ve never even seen before but could imagine myself being great friends with.

The setup was simple at Dogfunk — a drum set, some speakers, some cheap can lights on one side and a crowd of people filling the rest of the space. The back door was open and led to a backyard illuminated by string lights and cigarette embers. We hung out near the front, hoping to get a good view of our friends’ bands, and waited.

The music began shortly after we arrived and didn’t stop until my feet hurt from standing and my ears were ringing with good music. I was hooked, and after that first show I talked to as many people as I could in hopes of hearing about something cool going on that weekend, some interesting show or art gallery. I discovered a thriving community of live music, performance art, poetry readings and street art galleries that gave me the social life I wanted, not the social life that college stereotypes entail.

House shows don’t ask much. In fact, they ask even less of the crowd than house parties do. You’re not asked to meet people who aren’t open to friendship, and you’re not asked to surrender your dignity and pay $5 to dance with some people you’ll probably never see again.

All that’s asked of you is your smiling face, your dance moves and your open ears. The rest comes naturally — all you have to do is listen.

Christian primarily writes on social justice and campus issues for The Pitt News.

Write to Christian at [email protected].