Xanax: an unforseen danger in college 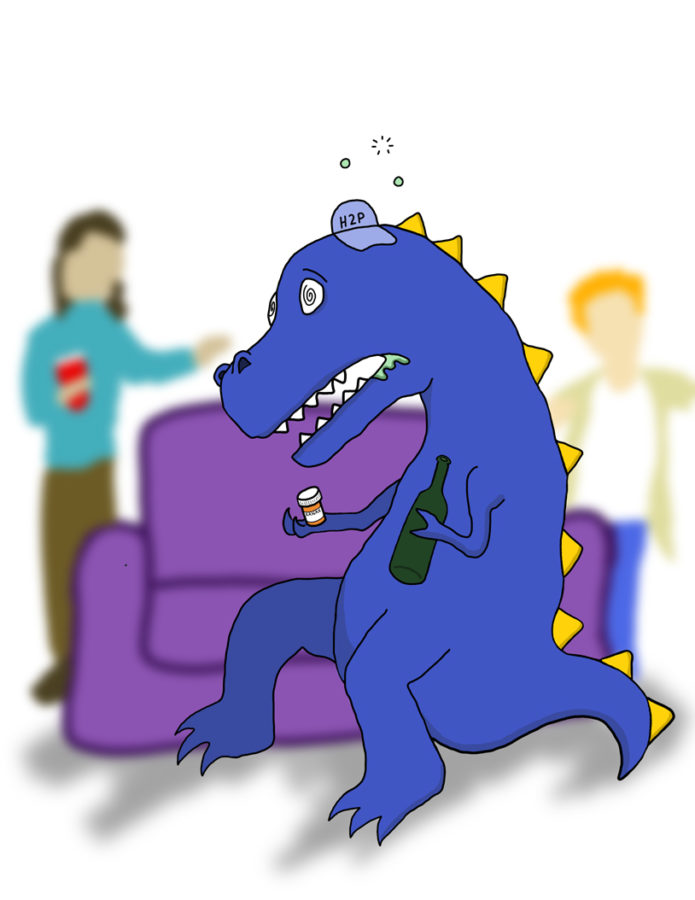 By Tim Murdoch | For The Pitt News

Its thunderous footsteps can be heard the instant it decides to return from the kitchen. Approaching the worn leather couch, it loses its balance. Flailing for a moment, then collecting itself, it manages to plop down onto the cracked sofa cover, slowing sinking into the cushion with a mumbled chuckle and a quick flash of its front teeth. What is this creature that moves like a sloth, eats like a pig and sounds like an ape?

The Xanasaurus rex, of course.

A college student, combined with two milligrams of Xanax and a few beers, is the recipe for becoming such a reckless beast, and it seems as if more and more are hatching on campuses every weekend. The number of students abusing tranquilizers like Xanax grew 450 percent from 1993 to 2005, and this number continues to rise.

This needs to end, and attitude is the first place to start. Shown by the rising rate of abuse, students are beginning to consider Xanax in the same category as, and mixing it with, alcohol and marijuana. But this is a dangerous comparison to make for a drug that has life-altering consequences.

If you’re like me, Pitt might be the first place you encounter Xanax and those abusing it. I was taken aback when I saw people at parties “barred out,” or so high on Xanax that they’re nearly unrecognizable.

Through combining recreational Xanax abuse with alcohol, students learned that anti-anxiety medication can be a very cheap way to “black out.” For less than a dollar’s worth of Xanax and a few drinks it becomes almost unavoidable.

But what most do not know is how dangerous combining Xanax and alcohol is. The two substances are central nervous system depressants that, when combined, can decrease breath rate and blood pressure to fatal levels.

The growing rate of abuse could be partially due to the Drug Enforcement Agency’s Schedule IV categorization. Schedule IV substances are defined as “drugs with a low potential for abuse and low risk of dependence.” By scheduling Xanax as they’ve done, the DEA has implicitly said to consumers that it’s a safer substance than any Schedule I drug — such as marijuana.

One justification for Xanax’s DEA status could be its medicinal use as an anti-anxiety medication. For those prescribed it by a doctor, its calming effects allow people with anxiety to feel less worried and anxious throughout the day. Key to its success is following the doctor’s recommendations, though — do not crush the tablet up, take only the recommended dose and do not take extra medication to make up for a missed dose. But abusing the drug recreationally might render it ineffective at delivering its calming benefits, and perhaps even make it worse.

“When someone takes [benzodiazepines, like Xanax] to relax, it becomes much more difficult for them to cope with traumatic events without the drug,” said Dr. Jody Glance, a Pitt psychiatry professor and addiction expert. “Interestingly enough, as someone takes more anti-anxiety medication, their level of anxiety increases when they are sober, making them more likely to get addicted to it.”

When addiction strikes, it’s frightening. And on campus, it’s even worse — students are more susceptible than adults to become addicted to the substance, and not just because of the increased rates of recreational use.

Dr. Erika Forbes, a psychiatry and pediatrics professor who is currently conducting research on substance abuse in young adult brains, notes how and why certain brains are more susceptible to addiction.

“Who ends up becoming dependent on substances later in their lives can be attributed to a variety of factors — home environment, location, as well as dependency toward friendship,” she said. “We’ve found that there is a different pattern of brain function when someone is with a close friend. They are actually more likely to do something with that person than without them because the brain rewards them differently.”

This is why Xanax is so dangerous for a demographic like students. In an environment where you are in charge of yourself — maybe for the first time — and constantly surrounded by close friends, taking a small pill with your buddy does not seem like a big deal. Your brain rewards you for fitting in and having fun with your friends, but quickly your body begins to crave both highs until they become indistinguishable from one another. That is when the addiction really begins, and you start becoming less and less like the person you were.

Xanax has become the bane of many students time here at Pitt. Personally, I know multiple schoolmates who have been forced to leave the University because of benzo addictions. It was sad, watching some of my closest friends spiral out of control and lose sight of why they were here. If we want to grow as individuals, we must learn to cope and deal with the negative in the world.

Modern medicine has given us so many miracles, but not everything can be solved with a pill and a gulp of liquor. Just try to remember that before you give the sketchy guy at a party $5 for what’s in his hand.