The Pitt News • May 30, 2017 • https://pittnews.com/article/120029/sports/features/pitt-athletic-director-brings-experience/ 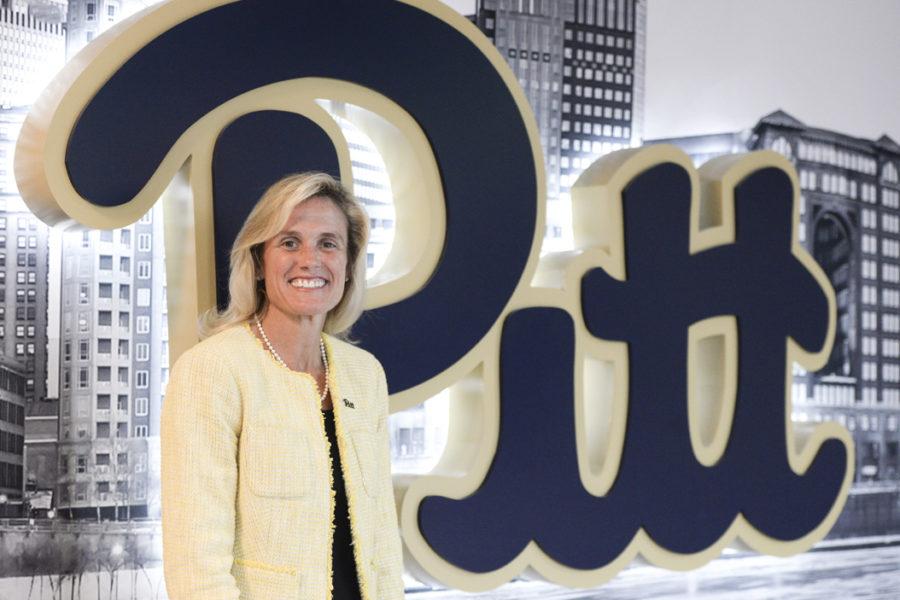 Athletics are in Heather Lyke’s DNA. She never turned down the chance to play any sport while she was growing up. But it took two degrees — one in education, the other in law — for her to decide it was the athletic world she should remain in.

Lyke is Pitt’s newest athletic director — the first female AD in Pitt’s history, a feat she also achieved when she joined Eastern Michigan’s team in 2013. Her excitement for this opportunity and enthusiasm for athletics is something she almost wills into the people she works with.

“[Pitt expects] success, and you want to work in that kind of environment where you’re getting better every day,” Lyke said. “I think college athletics is like that — people are naturally highly motivated. That’s exciting to me.”

Her family is also excited to enter Pittsburgh’s atmosphere. When Pitt’s new AD is off the clock, she is spending time being active outside with her husband and three children. Ever the athlete, Lyke tries to make sure she does a couple triathlons as well.

After spending much of their time in the Midwest, she says her family is ready for the city life and everything it has to offer, in terms of culture and, of course, athletics.

Since she was a child, Lyke was constantly active. She played “everything” she could, and this drive carried over into her collegiate years too. While attending the University of Michigan, Lyke played first base for the Wolverines softball team. Her aggressive commitment even pushed her to play through a broken collarbone. She was captain for two years and was a member of the 1992 Big Ten championship squad.

She never neglected the academic side of being a student-athlete and graduated with a bachelor’s degree in education. From there she went on to the University of Akron School of Law and earned a juris doctorate.

“I think what happened was I went to law school after college, and it was a chance to expand my educational experience, but ultimately I realized that I had a passion for athletics,” Lyke said. “I had a passion for impacting young people and helping them reach their full potential through the world of athletics.”

So, Lyke decided to dive back into athletics. She began by interning at the Enforcement and Student-Athlete Reinstatement department of the NCAA from 1995-96. She then moved on to Cincinnati as the assistant athletic director for compliance.

After Cincinnati, Lyke worked at Ohio State University until 2013, taking on many roles over her 15-year stint. She was a member of the athletic department’s executive team, managed 10 of the 36 athletic programs, oversaw the sport performance division and developed “Bucks Go Pro” — the university’s student-athlete internship program.

She also became a softball analyst for the Big Ten Network in 2009, a position she held until 2013. Even in her position as AD, Lyke said many of the skills from her on-camera job have transferred to the media relations side of her current job.

“To be able to deal with the media or talk on camera or into a microphone and to think on your feet is helpful,” Lyke said. “I think it was a tremendous experience from a public speaking standpoint and from learning all of the intricacies that go into building a television network.”

Lyke’s most recent job — prior to arriving at Pitt — was as Eastern Michigan’s AD. While there, she focused on turning around the school’s athletics programs and making them something exciting for the community. She brings this same excitement to any challenges she might face while at Pitt.

“You’re trying to build a team of people that are incredibly passionate about what we do, that know how to raise expectations and help our coaches and athletes have success,” Lyke said. “It’s a lot about the culture that you bring and the expectations that you set. It’s a ton of hard work, a ton of building.”

The building starts with learning. Lyke’s background in education might give her that edge in fostering a department that continues to push itself.

She wants to make sure everyone’s voices are heard. This includes the athletes — as both students and athletes — the coaches and everyone in-between. With her time as a softball captain at Michigan, she knows what the world looks like from the shoes of a student-athlete

“The quality of our student-athlete experience needs to be extraordinary,” Lyke said. “Philosophically, I believe that being a student-athlete at the University of Pittsburgh, we want that to be one of the most remarkable experiences of their life. That means not just competitively, but academically and personally and socially.”

In order to create such an outstanding experience for the University’s athletes, Lyke recognizes how she must become familiar with the intricacies of Pitt. This includes getting to know the needs of each of Pitt’s 19 teams.

Lyke won’t only be interacting with the student-athletes and coaches, though. Part of her job, and something she aims to do, is get the surrounding community as excited about Pitt athletics as she is.

“I think [athletics are] part of the fabric of the University,” Lyke said. “I think it is a way to connect. Sometimes people say it’s the front porch of a university because that’s what people read about. I think it’s also a great welcome mat. It’s a connector across the campus. It gives students the chance to showcase their talents across the university.”

Lyke has laid out the welcome mat herself to begin developing Pitt’s “culture of excellence” in regards to athletics. Christian Spears — Lyke’s recent hire for deputy AD and a man who spent three years with her at EMU — is no stranger to Lyke’s drive and knows what she is capable of accomplishing.

“She is singularly focused on making sure the student-athletes that we serve have an unbelievable experience,” Spears said. “She constantly ties it back to that, and ultimately that leads to a really effective and energized workforce.”

Hiring Spears gives her the chance to be a step ahead in terms of getting to know who she will be working with.

“The fact that we’ve worked together for three years at another institution, and we can now bring that collaborative relationship to Pitt, we think will allow Pitt to grow faster in terms of the things that we do to help our coaches and student-athletes be as successful as they can be,” Spears said.

Spears will mostly be in charge of revenue generation, but will work closely with Lyke to build Pitt’s athletic program. Both are determined to make it a source of pride for Pittsburgh.

“The people in this city are some of the most genuine and welcoming people I’ve ever met,” Lyke said. “There’s a reason why people love Pittsburgh, and I think it’s because of the people and the culture that exists. I’m excited to be a part of that.”