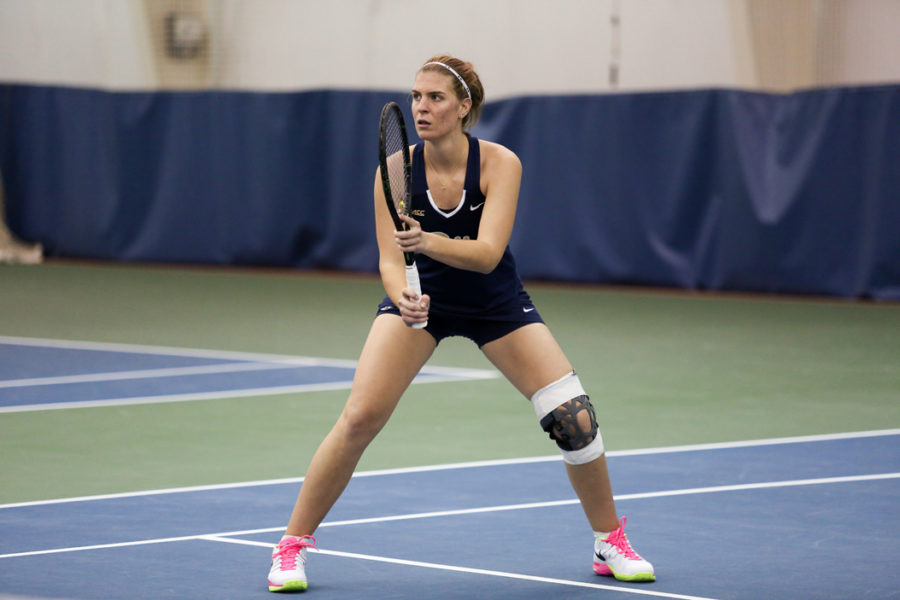 Jovana Knezevic’s day starts with an early morning weight session, followed by a full schedule of classes. But instead of returning to her dorm after class to study or relax, Knezevic heads over to the tennis courts for a three hour practice.

Learning where to go for the best pizza on campus, keeping up with classes and making new friends is hard enough for first-year students at Pitt but this adjustment proves especially difficult for student-athletes.

Athletes try to balance the already busy schedule of a Pitt student — plus competing in a Division I sport.

Knezevic, a rising sophomore international student in the business school and a singles player for the tennis team, said her daily life as an athlete was extraordinarily busy her first year.

This busy schedule is even tougher to manage when Pitt student-athletes travel for away games, trying to keep up on schoolwork while missing classes. ACC schools range as far west as South Bend, Indiana, and as far south as Miami, so traveling for conference games can take a toll on an athlete’s academics.

“It can definitely be very difficult especially during this semester where we traveled a lot,” rising sophomore outfielder Nico Popa said. “So it was a lot harder to make sure that I studied for all of my classes and got all of my work done. So, really, I just have to work more on time management.”

Nick Wolk, who hails from Peters Township near Pittsburgh and competes on the cross country and track teams, attested that athletes often miss class due to travel.

“Second semester has definitely been hard with how much we are traveling,” Wolk said. “I missed a lot of classes, but maintaining good relations with professors helps me out with that.”

Pitt’s policy allows student-athletes to miss class for games and competitions. Athletes are not allowed to miss class for practice, but the lack of classroom time compared to other students can be a hindrance.

“It’s been tough balancing athletics with academics, but it’s definitely doable. It’s a bit of a struggle, but I try to stay on top of it,” Wolk said.

Outside the classroom, student-athletes face the pressure of competing in a premiere college conference. The step up in play from high school to Division I is a big jump, and many Pitt athletes find themselves struggling in the ACC while they were all-state in high school.

“It’s definitely a big adjustment,” Popa said. “Especially [in college baseball] you have to be locked in at all times during practice and games. In high school, you could take a play off or not bring it every day, but here you have to or else you won’t be successful.”

Wolk agreed with Popa’s assertion that Pitt student athletes need to be performing at their best at all times.

Knezevic had different insights compared to Wolk and Popa, who are both native Pittsburghers. Being from Limassol, Cyprus, she has noticed major differences between American tennis and European tennis.
“From a tennis standpoint, the average level of tennis is high in America because most people have had access to [United States Tennis Association] tournaments and have competitive high school games, too,” Knezevic said. “I feel that in terms of technique American players hit flatter and harder because of the accessibility to the hard courts so the rallies can be shorter. In Europe we are taught to keep the ball as much as possible and that is due to the fact we have a lot of clay courts.”

The clay court is a softer, slower surface that allows for more bounce and spin on the ball. Hard courts allow the ball to travel faster, with a more direct path.

“All in all, I like the differences the way Americans work as a team and how that contrasts to the heavily individual game that tennis is in Europe,” Knezevic said

She also noted that even though tennis takes up a majority of her time, a student-athlete’s tight schedule can still be managed.

“I think the Pitt tennis program is well-balanced with my school schedule and I don’t have any difficulties,” Knezevic said. “I might have a tight and busy schedule, but I can make it work.”

In order for Wolk to make everything work and give himself some free time, he has to wake up before sunrise.

“I usually get up 45 minutes or an hour before I start running. We usually start at 6:30 or 7 o’clock. And then it will be like 10 miles or so a day, or a workout on the track if we are doing something different,” Wolk said.

Wolk’s day isn’t filled with only practice. As a political science major, he tries his best to stay on top of his classes, too.

“It’s just taking care of classes from there and doing what you need to do for school,” Wolk said.  “And usually we have some free time. [Track] is not everything in your life.”

Still, with 10 miles of running per day, Wolk’s life is centered around athletics. Luckily, he loves the sport and doesn’t mind.

“It’s important that you enjoy track and cross country, or whatever your sport may be,” Wolk said. “Because you’ll be wasting too much of your time if you don’t.”