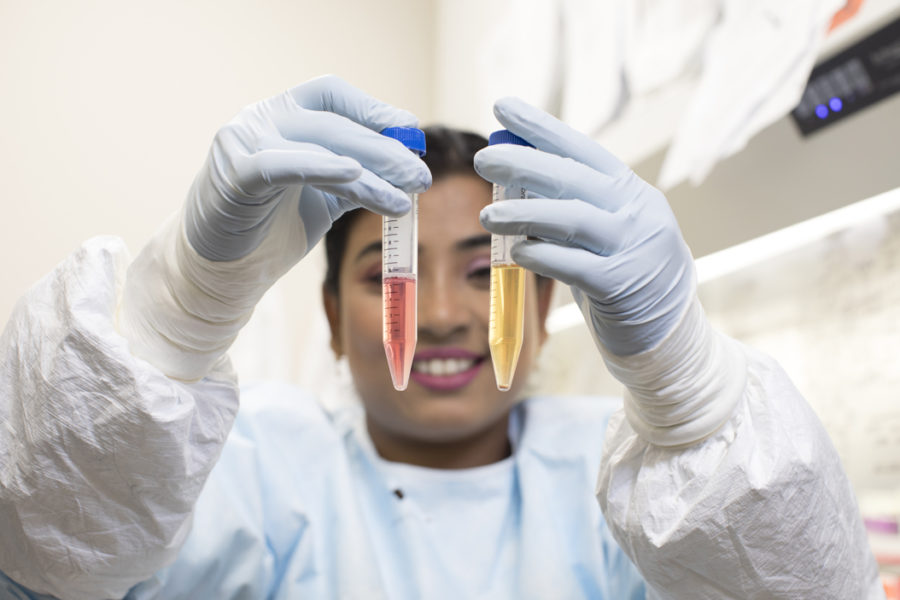 Dr. Anwesha Sanyal holds vials containing HIV-infected cells which are being prepared for a TZA test at Pitt. (Photo Courtesy of Tim Betler/UPMC)

Scientists in the University’s Graduate School of Public Health announced Monday in the medical journal “Nature Medicine” that they’ve created a more accurate, quicker and less costly test for detecting how much of the virus remains in a patient who has undergone conventional retroviral therapy to slow the spread of the disease — even when the virus is inactive.

The new test developed by Pitt researchers — dubbed “TZA” — works by detecting a gene that is active only when HIV that is able to replicate itself is present.

Dr. Phalguni Gupta, professor and vice chair of Pitt’s Public Health’s Department of Infectious Diseases and Microbiology, is the senior author of the paper published in “Nature Medicine” announcing the new discovery.

“Globally, there are substantial efforts to cure people of HIV by finding ways to eradicate this latent reservoir of virus that stubbornly persists in patients, despite our best therapies,” Gupta, said in a Pitt press release. “But those efforts aren’t going to progress if we don’t have tests that are sensitive and practical enough to tell doctors if someone is truly cured.”

HIV infects vital cells that play a major role in protecting the body from other infections. This leads to lower numbers of immune cells, making the body progressively more susceptible to opportunistic infections. Advances in HIV therapies in recent years have made the virus far more controllable, but it is still capable of “hiding” itself in immune cells and causing relapses in patients believed to be cured.

The TZA test produces results in one week, compared with the two weeks needed by Q-VOA — another method for detecting the presence of the disease — and it costs only a third of Q-VOA’s price, according to the release. The new method also requires a much smaller amount of blood and cells, making it safe for use on infants, and is said to better detect the virus even when it is lying dormant in immune cells.

Furthermore, trial runs of the TZA test revealed that the amount of dormant virus lurking in people treated for HIV who are considered nearly cured to be about 70 times larger than previously believed, indicating that older tests are not quite as reliable as they were believed to be.

TZA may also be useful for detecting HIV capable of replicating in younger patients due to its low cell requirement, as well as in the lymph nodes and tissues where the virus persists.

“Because these tests have different ways to measure HIV that is capable of replicating, it is likely beneficial to have both available as scientists strive toward a cure,” Gupta said.