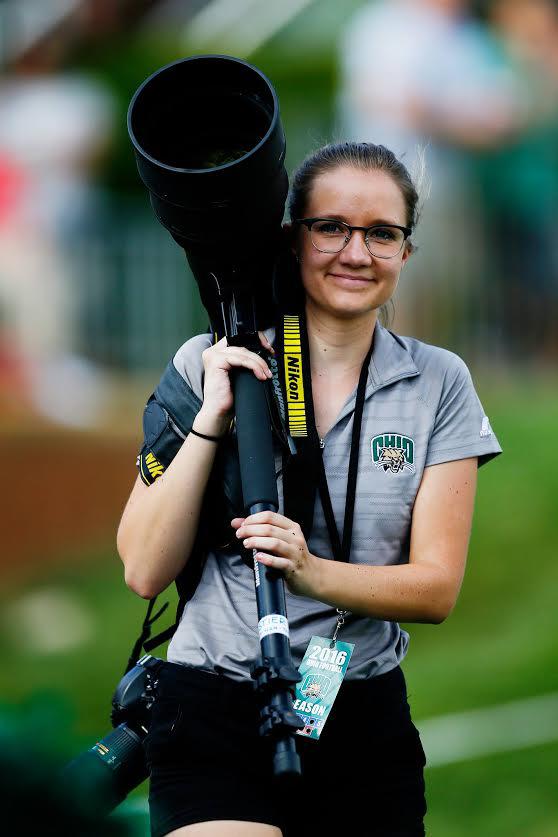 Sarah Stier is a student photojournalist at Ohio University and has experienced sexism in the industry. (Photo courtesy of Sarah Steir)

It’s halftime during the Pitt vs Duke game at Heinz Field. The photo room is warm and abuzz with chatter — most Pittsburgh-based photographers know one another and are sharing inside jokes and quips as they upload their first half shots to their respective publications.

I felt remarkably out of place for no discernible reason. I had covered plenty of other events where there were elite members of the photojournalism community. I even photographed two presidents. Pitt football was no big deal.

It wasn’t until after the game — in the back seat of a Toyota Corolla full of other Pitt Newsers — that I realized. I was the only woman in that room. As surprised as I wanted to be, I wasn’t.

In general, women are underrepresented in the field of photojournalism, let alone the boys club of sports photography. According to a study conducted by World Press Photo in 2015, 85 percent of working photojournalists are men. In my experience, the number of women working in sports journalism is even lower.

Sarah Stier, a senior photojournalism student at Ohio University and sports photographer for the OU athletics department, has faced these issues head-on. In January of 2017, she wrote a column entitled “A Call for Action — Supporting Women in the Field of Sports Journalism.” It appeared on The Photo Brigade, a website where photojournalists congregate and share ideas and experiences relating to their field.

The column soon made its rounds among the Facebook and Twitter feeds of journalists. It lays out Stier’s experiences as a photojournalist, from binge-watching the Olympics as a child to shooting them years later in Rio de Janeiro.

“Lately I’ve become disenchanted with the way that I, and so many other women, have been treated in this field that we are each so passionate about,” she wrote.

Stier’s portfolio is packed with impressive frames and high-profile coverage, but she still cites “unsettling experiences … of blatant sexism” while working in the field. Among these, she cites one that occurred at an OU bowl game. Throughout the game, Stier was encouraged by members of the security staff to stand back from the field, afraid she could be hit by a rogue player.

“They weren’t continually asking the male photographers to move back from the field,” Stier wrote. “I nearly lost my marbles.”

Other areas of sports journalism aren’t so great for women, either. The number of female sports editors at 100 Canadian and American newspapers fell by almost half between 2012 and 2014 — from 17.2 percent to 9.8 percent.

This disparity is alarming — especially for me — considering the amount of intelligent, dedicated, female student journalists I work with every day. These statistics make me question why women aren’t working in the field as much as men, and when they are, why they are being so limited in the work they are accomplishing.

In 2013, a study conducted by the International Women’s Media Foundation found that nearly two-thirds of female journalists had suffered some form of harassment at work. The lack of job security in the industry is also a leading cause of unreported harassment, for fear of retaliation in a business that relies so heavily on personal connections and professional networking.

The feeling of intimidation and unbelonging is another reason women don’t delve into the world of sports journalism.

Maura Razanauskas is a sophomore at Temple University, and one of only three women who write regularly for the sports desk at the daily student paper, The Temple News. I found Maura after tired attempts to find a female sports writer with the Post Gazette, The Philadelphia Inquirer and The Columbus Dispatch — after an hour of searching, I found no women at these professional publications.

Razanauskas explained that she got into sports writing because she came from a household where sports ruled.

“I loved writing, I love sports, so writing sports was the perfect fit,” Razanauskas said.

When attempting to join the field, she never actively thought about the disparity of women in sports writing. That was, until she took an assignment covering men’s basketball and realized she was the only woman at the press conference. Her experience was startlingly similar to mine — that still moment in the photography room.

“It’s weird once you become aware of it,” Razanauskas said. “It’s kind of … awkward.”

There is hope for young female journalists, though, despite these shared experiences of awkwardness and unbelonging.

In January, Getty Images introduced its first female sports photography internship. The year-long fellowship, hosted in London, offers college-aged women the opportunity to break into a field they may have otherwise not been able to break into. The internship follows the announcement of a broader partnership with Women’s Sport Trust, an organization that aims to challenge the way in which female athletes are portrayed in media and imagery.

Though these are all steps in the right direction — into a future of gender equality in journalism — they will not count for anything unless women are encouraged to step onto that field. Hopefully this fall — along with a winning season — Pittsburgh media will send more women to Heinz Field that share my love of sports journalism. We can sit next to each other, too.

Jordan is the Layout Editor for The Pitt News.

Write to her at [email protected]