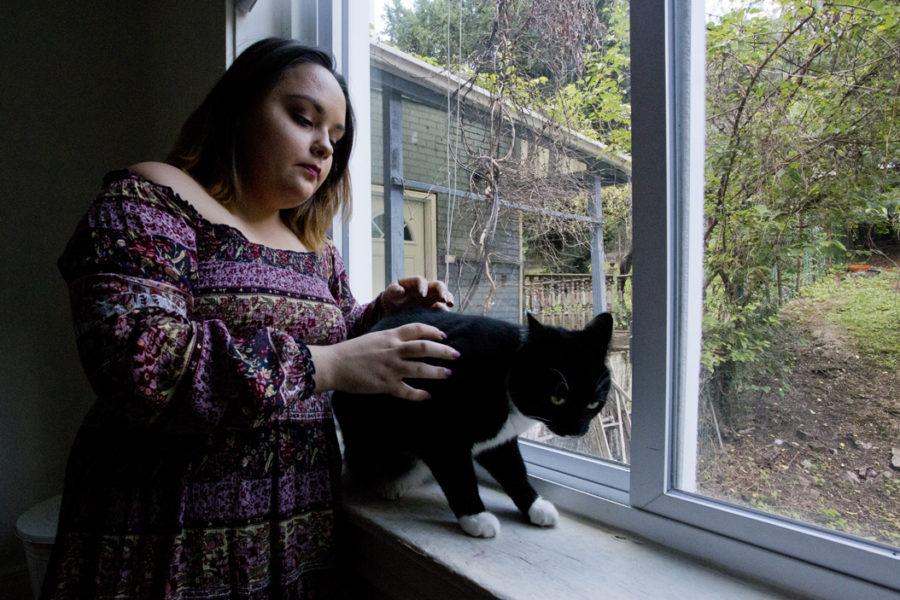 Winston prowls around a house on Bates Street — meowing, knocking things over with his black-and-white paws and chewing on the mail. For Georgia Vidal, a college student with a limited budget, housing space and time, her cat is a handful.

Vidal, a fifth-year senior majoring in media and professional communications, didn’t plan on having a pet in college. That is, until she saw a friend’s Instagram and Facebook photos of foster kittens, and fell in love with a cat she later named after Winston Bishop from the Fox television show “New Girl.”

Since she adopted Winston he can be found either playfully sprawled out on his back on the carpet in Vidal’s house or staring out the window with sharp, green eyes at the South Oakland streets. Vidal picked him from a shelter as an attempt to curb the loneliness in the large house she moved into with a couple of housemates.

“I have a companion when I’m around,” Vidal said. “I’m a cat person, and I grew up with animals. When I moved initially, the house felt really empty, and I was like, ‘It would be cute if there was a little cat walking around.’”

As students go off campus and settle into apartments and houses, many opt to adopt pets — if pets are allowed. But with academic, social and financial pressures, students face challenges while caring for their animals.

“It’s kind of expensive,” Vidal said, explaining that with cat food at $7 to $10, and litter at $11, she spends about extra twenty dollars a month providing for her cat.

Vidal faces other challenges, like being woken up as early as 5:45 a.m. to put out cat food, not being able to ride home on a bus with a cat and not being able to let Winston outside because of the potential dangers of Oakland streets.

And with unpredictable hours at her job as a server, she doesn’t always know when she’ll get to see Winston.

“Sometimes I’ll feed him, and I don’t know when I’ll come home. So that’s kind of difficult —  leaving him and knowing that no one is home,” Vidal said. “I can’t even let him outside to explore, so I do feel bad that I leave for the day, and then he’s kind of just like bored.”

Vidal is committed to the long-term care of Winston and knew before adopting that she would be more equipped to care for a cat than a dog. She suggests students considering adopting a pet be aware of the needs and life span of their prospective animal.

“Know the animal you’re getting yourself into, because it’s not just going to be for the next six months, it’s going to be for as long as they live,” Vidal said. “I’m going to have this cat until I’m 35. It’s a big commitment — I would say as much as [having] a kid.”

Pitt students looking for an animal friend without the commitment of caring for a dog or cat may turn to adopting a fish through the sorority Alpha Epsilon Phi’s annual goldfish fundraiser.

“A lot of people really love it,” said Megan Heintz, a political science and gender, sexuality and women’s studies double major and religious studies minor, who will be vice president of finance and philanthropy for the sorority next year.

While Pitt’s Residential Handbook, mentions a strict no-pet policy in residence halls and campus apartments, small fish bowls under one gallon of water capacity are allowed in university housing, according to Steve Anderson, the associate dean and director of residence life.

This makes adopting a goldfish an option for all students, regardless of whether they live on or off campus.

“People usually think the fish will die quickly, but they don’t,” Heintz said. “The majority of people that get [goldfish] love the fish and take care of the fish, which is really good.”

The sale takes place in Towers and Sutherland lobbies, with AEPhi providing students with a fish, a glass bowl, gravel and starter fish food for $5. Although no date has been finalized for the upcoming fall 2017 goldfish sale, it has taken place in November in past years. For this year’s sale, Heintz plans to share a pamphlet with students purchasing a fish explaining proper goldfish care.

“A lot of the freshmen are homesick and they want to buy a fish, but don’t know how to take care of it,” Heintz said. “We want to give people a little friend to have with them, but we tell them, ‘If you don’t have the time, don’t do it.’”

Marsha Robbins, a dog trainer and the creator of the Therapy Dog Tuesdays program at Pitt, agrees that college students may not have enough time to care for a pet. Unless it’s an animal that can be easily cared for in a cage or tank, Robbins doesn’t think it’s a good idea for students to adopt their own pets.

“College students like to have fun — they like to have a social life,” Robbins said. “If you [care for a pet] properly, there’s a lot of responsibility and time and dedication involved, and that’s a lot to pay on top of the demands of a college student.”

Robbins says a college student lifestyle cannot provide the exercise, mental stimulation, grooming, food and veterinary care required to support an active animal. To provide an alternative to students who cannot support a pet, but seek the comfort and emotional support of an animal, Robbins developed the Therapy Dogs Tuesday program at Pitt almost 15 years ago.

And Pitt students — many who have pets of their own at home — do flock around the therapy dogs at the Cathedral to show their love. According to Robbins, around 300-500 students come every Tuesday to pet the dogs near the start of the fall semester.

For Pitt students who cannot adopt a pet, but want to interact with a variety of animals without the crowds of Therapy Dog Tuesdays, Pitt’s Animal Lover’s Club provides more animal interaction options.

Although the club’s primary goal is to fundraise for struggling local animal shelters, the club also strives to maximize student interactions with animals by scheduling animal-related events and bringing a pet to every general body meeting.

Club members have brought dogs, cats and even a pig to meetings in the past, according to Zoë Simpson, a sophomore psychology major and studio arts minor who will be the vice president of the Animal Lover’s club next year.

“Usually they’re rescue animals,” Simpson said. “You get to hear stories about how the rescue process works and what the animals’ backgrounds are — so that’s great.”

Compared to crowds at Therapy Dog Tuesdays, Simpson appreciates how the club allows for intimate interactions with animals.

“It’s in a smaller group setting, so you can have one-on-one with animals, whereas Therapy Dog Tuesdays gets kind of out of hand,” Simpson said.

Each year the club takes a trip to the Pittsburgh Zoo and PPG Aquarium, where club members get a behind-the-scenes look at the work done by zoo-keepers and how employees work with animals.

“We actually went to the lions’ enclosure, and I got to see a 300 pound adult lioness from like five feet away,” Simpson said. “It was crazy.”

Simpson will be moving off-campus next year, but despite her interest in animals, she won’t adopt a pet because her new apartment is not pet-friendly. In the future she would love to foster an animal or temporarily care for an animal before it gets adopted to a permanent home.

“I know a lot of people who have fostered animals at school and they’ve had success,” Simpson said. “It’s a great thing when you want to have an animal for a couple months, but don’t want to adopt for the entirety of its life.”

Whether it means caring for their own animal, or visiting Animal Lovers Club or Therapy Dog Tuesdays, Pitt students have plenty of ways to catch a glimpse of a whiskered face or a wagging tail.

Robbins agrees that having pets on campus benefits students. She thinks bringing friendly dogs who love to nuzzle up against Pitt students is another way to make a difference in a college student’s life.

“It feeds your soul,” Robbins said. “It makes us feel like we may be doing something to affect the future. On a night when [students] are feeling particularly down, instead of going out and getting drunk, they can come and pet the dogs. Maybe we’re teaching them healthy ways of coping with stuff.”