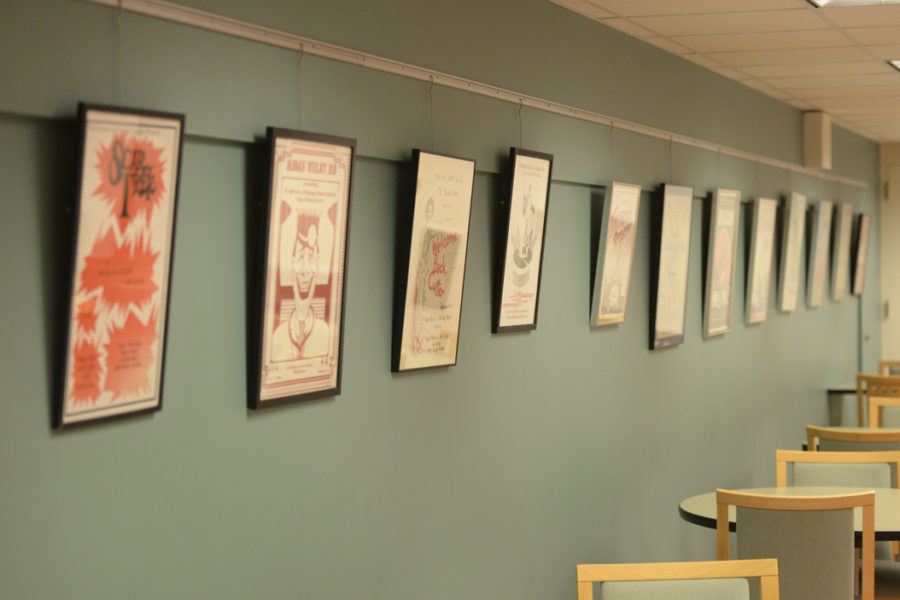 A Scope and Scalpel exhibit in Scaife Hall showcases playbills from med student productions over the past 63 years. (Photo by Maria Heines | Staff Photographer)

Nestled deep within Falk Library atop Cardiac Hill sits one of Pitt’s most unknown gems — a small art exhibit comprised of artifacts from past plays performed by Pitt’s medical school.

Annually, fourth-year med students perform a pop culture-themed play with a medical twist, called Scope & Scalpel. According to the Scope & Scalpel website, Pitt Med has the largest non-professional theatrical production in Pittsburgh. This past May, med students performed “The Lord of the Ring: Enhancing Lesions” in Scaife Hall as their 63rd consecutive year producing plays.

Each graduating class writes, directs and performs a production that voices the highs and lows of being a med school student.

The Pitt Med students’ performance history is on display for the first time from now until August 15. The archival collection, titled “As The Years Go By: A Scope & Scalpel Retrospective,” includes a chronological display of past playbill posters, along with a media station with the original songs recorded for the productions.

The Scope & Scalpel tradition started in 1955, when Frank Dixon and med student Samuel B. Aronson II first decided to put the graduating class’s talents to good use during a “gripe session,” according to the play’s website. After seeking approval from Dean William S. McEllroy and gaining advisor Dr. Ross Musgraves, the end-of-the-year performance launched in the spring of that year and has continued since.

Gosia Fort, the head of digital resource development at Falk Library, started working on the exhibit in 2014.

“I think [Scope & Scalpel] is one of the most colorful things about the school of medicine,” Fort said.

Fort enlisted the help of archivists in Hillman Library along with Falk colleagues, including Julia Dahm, a technical services librarian, who helped put together the slideshow and the recordings on the television after the materials were described, prepped and sorted. Much of the work included digitizing VHS and cassette tapes, along with vinyl records for both easy listening and library cataloging.

The graduating class of 2017 completed their performance in May, but the history of the shows will be on display through the end of the summer.

Fourth year med student Wei-Wei Lee directed this year’s production that played off of the popular “The Lord of the Rings” series.

“It’s a really nice change of pace — a really nice outlet,” Lee said. “It’s coming at the end of our fourth year — it’s a great way to do something with our class again before everyone’s out in residencies and out in different places across the country. I think another thing is just to see how talented the med students really are.”

Lee worked with classmates, some of whom she had not seen since her first year of med school due to differing schedules. This group included head writer Tim Ohlsen and team, along with the show’s producer, Eva Urrechaga.

“I did the creative stuff and Eva made it happen,” Lee said. “That’s how we liked to think of things.”

Lee remarked how much of the school’s faculty were former graduates of the program — the majority of whom either participated in or came to watch their year’s Scope & ScalpeI.

“The thing about the Pitt Med community is that a lot of people end up staying in here in Pittsburgh, whether they stay for residency or come back for fellowship or work as an attending physician,” Lee said. “We actually have a lot of faculty who are Pitt Med graduates who also participated in Scope & Scalpel, so often times they are either involved in some way in the videos we’ve made in scene changes or they’ve come to the show to support us.”

Rittenberger commented on the importance of keeping the arts connected to science programs, saying that one couldn’t exist without the other.

“The [med school] does a good job of including the arts,” Rittenberger said. “It’s always a danger when you go into a hardcore scientific field — you lose the capacity to see where arts and the sciences intersect and then you lose a lot.”

Lee agreed with Rittenberger, adding that there are a lot of nontraditional applicants to medical schools who have pursued things not directly related to healthcare and medicine.

“I think that’s really great because it promotes more diversity and life experiences before going into medicine,” Lee said.

Rittenberger, a 2002 graduate of the med school, directed his class’s production “Crouching Patient, Hidden Finger.” When directing the play, Dunmire told Rittenberger that his completed production was too long, causing his classmates to rework the script just days before the opening performance.

“We ended up cutting out several things and moving things around at the last minute, and I remember thinking, ‘Oh god, it’ll never work.’ But actually, night of the show, things went fine,” Rittenberger said. “It went smoothly, but there was a lot of the eleventh hour that made that final performance work.”

Since graduating from med school, Rittenberger completed his residency and became a clinical research fellow at Pitt before assuming his role as faculty advisor for Scope & Scalpel. Like advisors before him, he never sees the script, as is tradition since the 1955 debut. While Rittenberger assists the play in many ways, he emphasizes that the production is entirely student-run from start to finish. But he said keeping staff linked to the production is an important way of ensuring faculty and student relations.

“It reminds me of their experience,” Rittenberger said. “And helps me see things through their eyes again.”

As always, after spending the winter planning, the play theme will be announced in March on Match Day, as is tradition.

Match Day is when graduates find out where they will spend the next one to seven years of their life, sometimes proving the deciding factor between two different specialities. The occasion usually occurs in the auditorium of Scaife Hall, and is one of the first times many of the students have seen one another since they started work in their third and fourth years at different hospitals or clinics.

Along with bringing med students back together again, Rittenberger said that the yearly performance brings people into the “weird world” of medical school and offers a taste of what working in the medical field is really like. Much of the play’s audience includes family and friends of the soon-to-be-graduates, faculty and first-, second- and third-year med students who will one day perform as well.

Fort has high hopes that at some point, every year will be represented in the display, as certain playbills are still missing. Alumni and faculty are encouraged to come forward with any materials.

“It’s also not a very typical archival collection because it is growing,” Fort said. “We are actively collecting these materials, so every year we will be updating what we’ve got.”

All participants agree that the tradition of Scope & Scalpel is unique to Pitt. And while it is a common tradition for med schools to have “follies” or final skits and parodies — some of which, such as Harvard’s, have achieved minor YouTube fame — Pitt’s tradition of a full-length feature performance is unique.