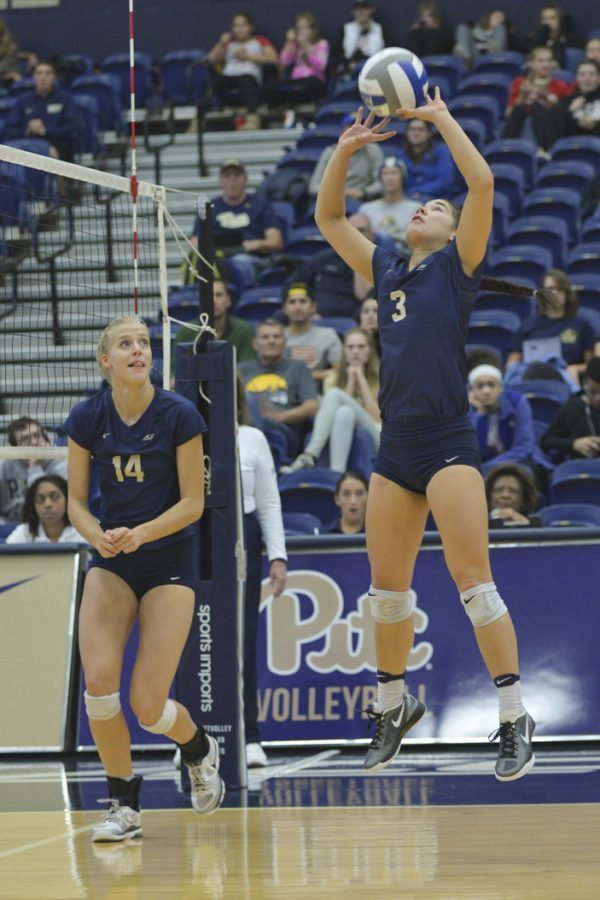 When junior setter Kamalani Akeo arrived at Pitt in the fall of 2015, she didn’t quite know what to expect — either on or off the court.

After all, she was traveling over 4,500 miles from her hometown of Kapolei, Hawaii, where she played on one of the best high school teams in the state. In her junior season, Akeo helped her team win the state volleyball championship before coming in second one year later.

Now a Panther, she has become one of the team’s best athletes, thriving in her sophomore year. In addition to helping the team make its first NCAA Tournament since 2004, Akeo won the ACC Setter of the Year award,tying for first in the conference with 1,300 assists.

Heading into this season, expectations have risen as the team hopes to advance further in the tournament. The Pitt News caught up with Akeo to discuss her adjustment to college life and the hopes she has for the coming season, both individually and team-wise.

The Pitt News: After growing up in Hawaii, what drew you to come all the way to Pittsburgh to play for Coach [Dan] Fisher?

Kamalani Akeo: Well our team is really family-oriented and that’s what Fish [Coach Fisher] really instills in the culture of the team. I could tell that the first time I came to campus, just hanging out with the girls and spending time with the coaches. So just that team culture and the family aspect that the team embodies is a huge reason why I came all of this way. They are definitely my family away from home and I probably couldn’t make it without everyone on the team, all of the girls and the coaches.

And then definitely the volleyball part of it. We are an up-and-coming, really good program and I could see that Fish was really building, especially in the past three years … I could really tell that this was a place where I could play high-level volleyball.

TPN: Was there a difficult transition from life in Hawaii to life in Pittsburgh and playing Division I volleyball?

Akeo: Yeah, there definitely was. I don’t want to say it was all like rainbows and sunshine. I mean I love it here, but definitely the transition was hard. I think just going from any high school sport to a D-1 sport, people will tell you what to expect, but I don’t think anything really prepares you for the intensity and the grind you really have to go through when you get here, so it was something I had to get used to.

Practices and workouts were definitely a lot harder. Being from Hawaii, the weather was a huge change. Obviously, [in Hawaii] it’s 80 degrees most of the time with a low of 65 degrees on really bad days. So the winter made it a little harder because it was really cold outside and I wasn’t used to it. But, it wasn’t as bad as I thought it would be. It was actually pretty good and I came pretty prepared which was nice. My sister actually went to college in New York and I got all of the hand-me-downs. So I was definitely warm, which was good.

TPN: During your freshman year, who would you say had the biggest impact on you and what did you learn from them?

Akeo: I think out of freshman year, there were two people that really impacted me. Fish, definitely, and then my teammate Amanda Orchard. Fish in the way I learned so much off the court that year and on the court. After freshman year, he took my game to a whole other level and just had this belief in me and kept pushing me. I didn’t like it at the time, but things that you don’t like are going to help you. He really pushed me and kind of created me as this leader that I am now.

Also, Amanda was a really good role model my freshman year. I looked up to her a lot. She was an All-American and our team captain. She just had this vibe about her. First, she’s a great person and she also works really hard. In my freshman year, that’s someone who I embodied myself being on the court. If you’ve ever seen her on the court, she’s really intense.

TPN: Before last season, did you think the team could go as far as it did, making the tournament and winning in the first round? Why or why not?

Akeo: I had no idea what to expect, but I kind of just have this idea in my mind that the sky’s the limit really. So I didn’t doubt us at all, but I had no exact idea that we were going to make it that far.

I mean coming from Hawaii, I had no idea I was going to make it here. And then even after freshman year, I had no idea that I would be starting setter at 5-foot-6, setting a 5-1 [formation], and playing in the front row.

Just being here the past two years, it has opened up my eyes to possibilities. When we ended up making it last year and winning in the first round, I wasn’t surprised at all — especially after all of the work we had put in throughout the entire year.

TPN: What was it like to make the NCAA Tournament last season and what did you and the entire team learn from that experience?

After being in the tournament, we definitely know the work it takes and because our goals this year are even harder, we know it’s going to take a lot more…

TPN: Even though you won ACC Setter of the Year last season, what did you try to work on this offseason? Do you think you can repeat?

Akeo: My goal for the offseason was really to increase my vertical and get stronger. It was a great honor to win ACC Setter of the Year, but I’m not even close to where I want to be or where I know my coaches want me to be. And so if we do end up running a 5-1 like we did last year, I want to be able to put up a bigger block and put up really critical sets from long distances. So that’s pretty much what I’ve been working on in the offseason. And I mean the award is great, but I’d rather make it to the Sweet 16 than be Setter of the Year. That’s really where my heart’s at.

TPN: What’s it like playing with middle and outside hitters like Layne van Buskirk and All-ACC honorees Stephanie Williams and Mariah Bell? What do you try to do as a setter to help them produce and why do you think you work so well with them?

Akeo: It’s really cool playing with all of them. We all have the same mindset and I think Fish has gotten that into our heads since our freshman year, or even after this year for Layne. But we always want to get better. We’re always pushing to work harder and connect every time. We make it a point to connect after every set.

Definitely me, Steph, and Mariah, after playing together for two years, now kind of know each other a lot more. I’ll know if Steph approaches too fast or she’ll definitely know if my speed of the ball is getting a lot slower. And it’s the same thing with Layne. We definitely got into more of a groove after last season but I expect better connections this year.

TPN: This year, you’ll have three new players — Alex Rosignol, Kayla Lund, and Chinaza Ndee — joining the team and competing for playing time. How have they gelled with the team and what impact do you think they’ll make this year?

Akeo: I think that the three of them can make a really big impact. We definitely have big expectations, especially for the freshman Kayla and Chi. Chi is really athletic and is probably the most physical player we have ever had on our team, so we expect a lot from her. And Kayla as well, she has really good ball control and a really good arm and she’s just an all-around good player.

They are going to work really hard to get into that starting lineup. If not, they are definitely going to increase the level in our gym. Alex, unfortunately, hasn’t been practicing with us yet coming off of her foot surgery, but she’ll be fighting for that middle spot…

TPN: Overall, what does the team need to do this year to be successful and what are the expectations you’ve put on yourselves?

Akeo: This year I think it’s a lot about just getting used to each other, finding a good chemistry, and building on our team culture and having a good gel when we play. I don’t think that we lack any talent or physical ability or anything like that. I think it’s just really about learning to play with each other and learning to trust each other while we are playing.

I think that will go a long way, especially in the ACC and when we hopefully make it to the tournament. And our goal for this season — our team goal — is to make it to the Sweet 16 and to host. So that is what we are shooting for every day.

TPN: How good do you think this team can be? Do you think you could win the ACC? How deep in the tournament could you go?

Akeo: I think that this year is definitely our year, and if everything works out in the right ways, we can definitely win the ACC. I think for sure, especially with our schedule, we can make the Sweet 16. I think, honestly, that we can go a little bit further. The sky’s the limit and I think we have a really good opportunity this year.