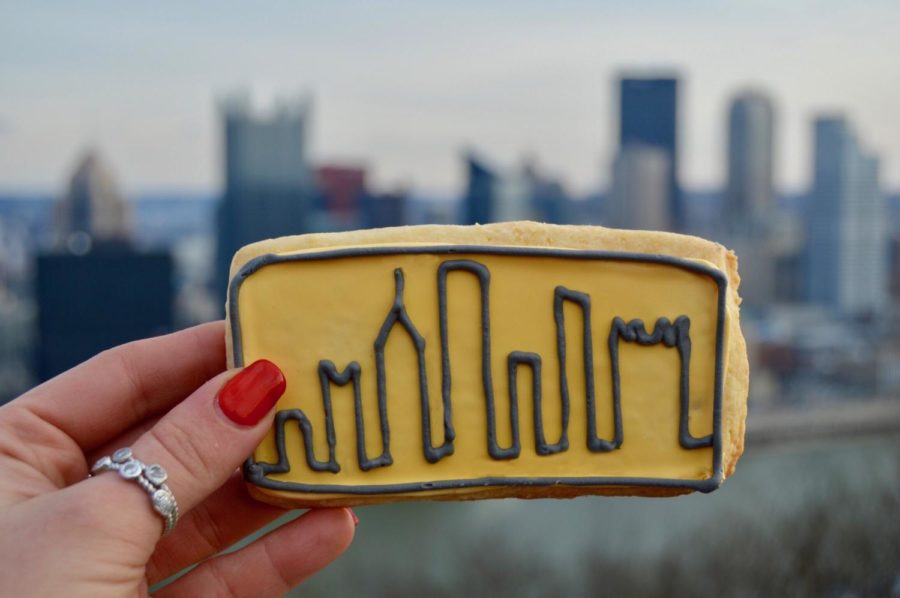 Elaine drew the outline of Pittsburgh's skyline on a cookie. (Photo courtesy of Elaine Khodzhayan)

By Rachel Lombardo / For The Pitt News

With three vanilla pound cake rounds cooling in front of her, Elaine Khodzhayan combines the perfect concoction of peanut butter, cream cheese and powdered sugar into her signature frosting.

Khodzhayan, a rising senior majoring in human resources management and business information systems, is the baker and brains behind And A Chocolate Drizzle, a baking Instagram page and blog she started in 2015.

Her mouth-watering desserts — each racking up thousands of likes and dozens of reposts across Instagram — are all made in the small, galley kitchen of Khodzhayan’s Oakland apartment. This inventive culinary dynamic — along with her love for rap music and inclusion of rap influences in some of her cakes — has led to her being referred to as the love child of Martha Stewart and Snoop Dogg.

“It’s a funny story,” Khodzhayan said, explaining how her blog started. “In high school, I started taking pictures on my phone of what I was baking just to be like ‘oh look what I made’ and I’d post it on my personal Instagram page with a description of what it is […] and a chocolate drizzle on top.”

Many of Khodzhayan’s peers in high school made fun of her for her baking instagram, claiming that baking was a waste of time and potential for a girl as intelligent as herself. But Khodzhayan did not allow the discouragement to stop her.

One day a coworker brought up the idea of Khodzhayan creating a separate blog for her baking. So that same month Khodzhayan launched the Instagram page with a name that came ever-so naturally — And A Chocolate Drizzle.

“It was a very organic growth, which to this day is so surprising,” Khodzhayan said.

Khodzhayan scurries between her kitchen and hall closet. Her hall closet, she says, is the baking closet — full of piping bags, bulk containers of mini M&M’s and anything a baker blooming into culinary stardom could need.

Khodzhayan remembers her first post to reach over one thousand likes distinctly — three Oreos with the cream scooped out and replaced with cookie dough. Within the sixteen hours following that post, her account gained over a thousand followers from all over the world.

“I want my followers to feel like we’re friends,” Khodzhayan said. “It means a lot that so many people get excited when I post.”

One day, one of her followers — a girl named Abby who is not much younger than Khodzhayan herself and a prospective student at Pitt — direct messaged And A Chocolate Drizzle to tell Khodzhayan how much of an inspiration she was and ask about the business school at Pitt.

It seems as though many portions of Khodzhayan’s life — as a baker and Pitt Pathfinder — collided into one. Khodzhayan enthusiastically sent Abby a variety of information about Pitt. A few months later, Abby found herself on campus and asked to meet with Khodzhayan. The two ended up meeting, sitting and talking about baking and their mutual love for Pitt.

“[Meeting Abby] made me so happy,” Khodzhayan said. “And I would trade it [And A Chocolate Drizzle] all. I would trade everything for that one interaction.”

Luckily for the Instagram world and anybody who has had the privilege to taste her delicious treats, she doesn’t have to.

She grew up in the food business. Her parents are owners of two pizza shops, Steve-O’s Pizza and Fresco Pizza and Wings in Jamestown, New York.

From early on, it was clear that cooking and baking were much more than jobs or hobbies for Khodzhayan. Always surrounded by family and food, the kitchen became her natural habitat, stress-reducer and happy place.

“I collect cookbooks. I’ll read a cookbook like an actual book,” Khodzhayan said, citing Julia Child’s “Mastering the Art of French Cooking” as her all-time favorite.

From these cookbooks and a long history of family recipes, Khodzhayan adapts her own recipes for And A Chocolate Drizzle.

Khodzhayan begins stacking the rounds of vanilla pound cake on top of one another, smearing layers of peanut butter frosting and mini M&M’s between each layer.

“Hands down my favorite thing to bake is birthday cakes,” Khodzhayan said.

Ranging from a Minecraft-inspired cake for her younger brother, to a cake decorated with her roommate Giulia’s favorite Kinder chocolate candies, to a variety of specialized cakes for her family members, Khodzhayan has mastered beautiful, personalized delicacies for her loved ones.

In addition to inspiring her cake-gifting etiquette, Khodzhayan says her mom’s baking inspires her own passion.

“The most famous thing my mom makes is her baklava,” Khodzhayan said. “She’ll always tell me, ‘It’s healthy! It has nuts! It’s good for you!’”

According to Elaine’s best friend Giulia, the baklava does not fall far from the tree.

“My absolute favorite has to be her Armenian baklava,” Giulia said. “It’s so, so good, I absolutely love it.”

Both Khodzhayan and her mother are inspired by their Armenian culture. Not only do they specialize in baklava, but in other traditional Armenian desserts like karakoul — an apricot meringue and ginger dough cake — and a bird’s milk cake.

“My family is aggressively Armenian — I grew up speaking Armenian. We are very culturally tied to it,” Khodzhayan said.

Khodzhayan even earned the nickname “Ponchik” from her family — meaning “doughnut” in Armenian — after several trips to Armenia and ravenous consumption of those flat, cream filled confections at her favorite Armenian bakery.

“I try to be very open about my culture and background. In my [Instagram] profile I have an Armenian flag because I always get really excited when other Armenians interact with one another,” Khodzhayan said. “You can spot another Armenian from a mile away. We’re like born with a radar.”

After smearing an even layer of frosting across her nearly eight-inch cake, Khodzhayan begins piping swirls of frosting around the edge of her cake and sprinkling mini M&M’s and melted chocolate across the top.

“I wish her all the success in the world. Mostly because she deserves it, but also because I need someone’s coattails to ride to fame and fortune,” Callahan said. “And A Chocolate Drizzle has been such a fun project to watch grow and transform into something that has been amazing accomplishment after amazing accomplishment for Elaine.”

Regarding the future of And A Chocolate Drizzle, Khodzhayan plans to continue to bake for as long as it continues to fulfill her life in some way.

In the meantime, Khodzhayan will be working to finish her senior year at Pitt and continuing to sprinkle joy and drizzle chocolate across every aspect of her life.

“More than anything, the little eight-year-old ‘ponchik’ in me is so, so happy that all of this has happened,” Khodzhayan said.

Khodzhayan assembles a makeshift photography studio around her cake, making sure to use the natural light from her living room window to properly illuminate her cake. With her Nikon D3200 she begins meticulously photographing her creation before slicing away a piece to devour.