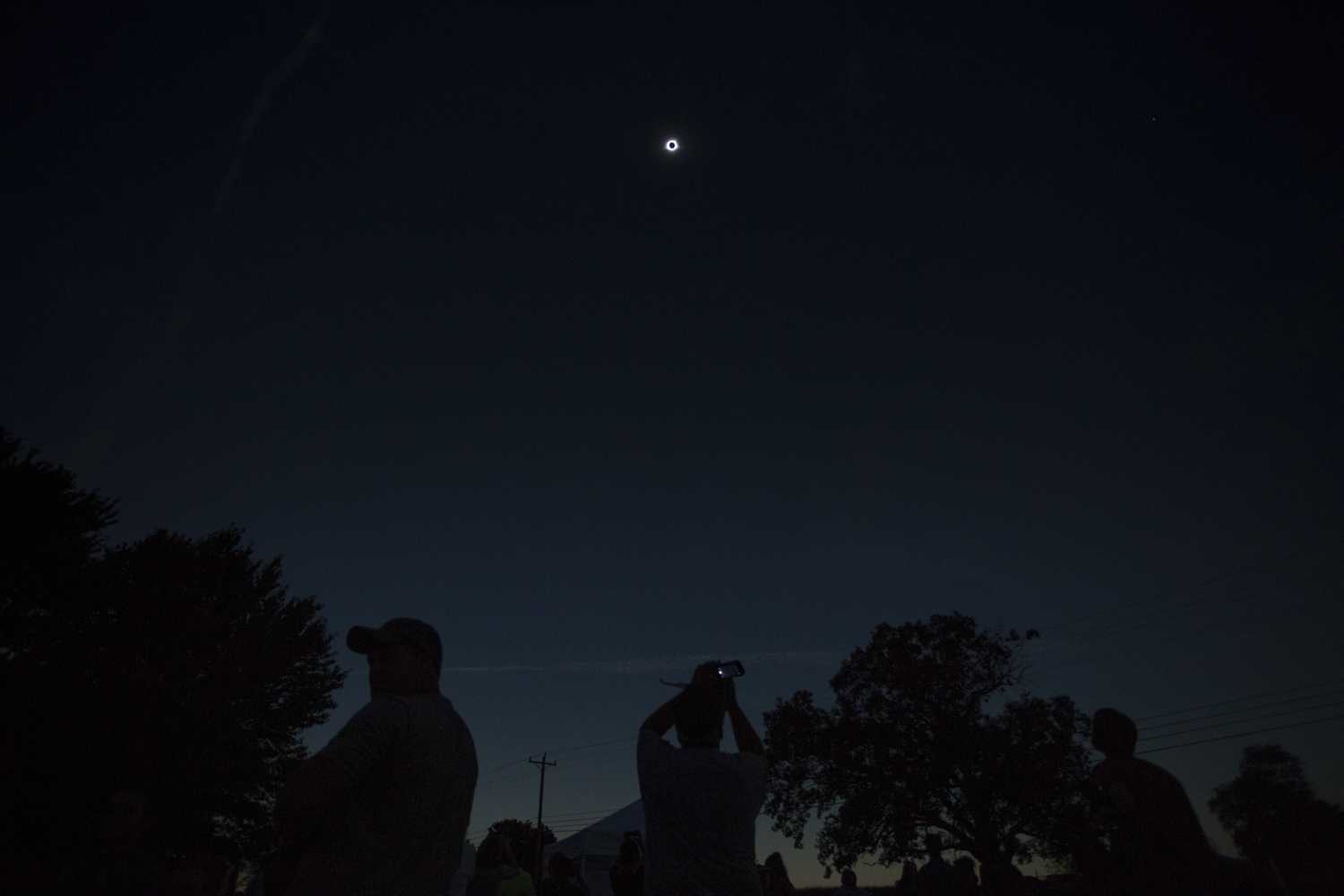 As the Pitt Shadow Bandits gradually filled their weather balloon with helium, a symphony of worried gasps escaped from the crowd of spectators as they heard a loud pop and saw the balloon’s deflated remains spread out on the lush Tennessee grass.

“Do they have enough helium for another?” someone in the crowd asked.

“What will they do if they don’t? Launch anyway?”

The balloon in question belonged to the Pitt Shadow Bandits — a group of Pitt students, faculty and staff. They travelled to Springfield, Tennessee on Monday to send a balloon and payload up to the edge of the earth’s atmosphere to document and research the total solar eclipse.

The team — which is participating in NASA’s Eclipse Ballooning Project — brought five balloons to Springfield, but only enough helium to fill two balloons. Luckily they were able to fill their second balloon and successfully launch it in time to livestream the total eclipse — the first to cover the entire United States in more than a century.

Janvi Madhani, a senior majoring in physics and astronomy, said that the team barely had enough helium to fill a second balloon — the team usually uses 7.6 pounds of helium, but had to settle for 7.2 pounds.

“We did run lower on the amount of helium we wanted to send up,” Madhani said. “[It was] actually a significant amount, but we still made it.”

In the eight test launches the team held leading up to the eclipse, not one of the balloons popped, according to Russell Clark — a professor in Pitt’s physics and astronomy department.

“We just barely [had enough helium],” Clark said. “It was a real nail-biter.”

David Turnshek, a Pitt professor and director of the Allegheny Observatory, said they didn’t have enough helium for a third balloon.

“We’re not really in bad shape,” he said after the pop, “unless we lose another balloon.”

Along with some local residents, friends and family of the Pitt team joined the scientists in Tennessee to watch the launch and witness the historic total eclipse.

The moon began to eclipse the sun just before noon. The Shadow Bandits monitored the progress for the next 90 minutes, before taking a break from their work as the moon’s shadow fell on Springfield.

All of the scientists and eclipse watchers removed their glasses and craned their necks to marvel at the sky. The moon perfectly covered the sun, and the sun’s corona — hot gas surrounding the star — became visible around the silhouette.

The sky’s light blue hue deepened as the moon positioned itself before the sun, blocking out most of its daylight. A low, warm yellow light appeared on the horizon, and many spectators remarked that the sky resembled Golden Hour — the time shortly after sunrise or before sunset — even though it was the middle of the day.

Some of the professors pointed out solar prominences below the corona — red glowing loops of plasma rising and falling back onto the sun’s surface — and the diamond rings on the left and right of the corona immediately before and after totality.

“It was dynamic and it was moving,” Clark said. “There were the little red prominences, the Bailey’s beads and the diamond effect — and it’s just like, this isn’t some CGI thing — this is real.”

The team’s goal is to confirm or disprove the standing theory that shadow bands — thin waves of alternating light and dark that can be seen undulating on plain-colored surfaces before and after a total solar eclipse — are caused by atmospheric turbulence.

Based on preliminary data, the Shadow Bandits confirmed the long-held theory that the earth’s atmosphere is the cause of shadow bands on the earth’s surface during eclipses.

“Having this data — this is high-resolution, high-speed film — that’s going to add to the whole repository knowledge about these things,” Clark said. “We’ve got some good solid data to report and share with the community.”

Though they have enough data to confirm the theory, Clark said the team could be analyzing the data for weeks or even months.

“We are still looking at the data that the balloon payloads took, and so far it looks great,” Sandhya Rao, a professor in Pitt’s physics and astronomy department, said in an email.

Though the team eventually found their payload — which holds all of the team’s GPS trackers, cameras and light sensors — they had some technical difficulties trying to cut it loose from the balloon.

As their cut signals failed, the balloon kept floating higher and higher, eventually reaching a height of 103,704 ft — well above the intended 80,000. After four attempts of sending signals to the balloon to cut the payload loose, the request finally went through and the payload parachuted down to earth.

And Clark was right — at about 3 p.m., the payload ended up in a forested area four miles away from the launch site, much closer than their average test launch.

The team immediately downloaded the data recorded from the recovered payload after the eclipse ended, and began reviewing not only the scientific findings, but also reflecting on the phenomena.

“[The eclipse] was definitely breathtaking — I don’t think I was prepared for how beautiful it was,” Madhani said. “The trip was totally worth it — I would do it again.”

And Madhani doesn’t have to travel too far or wait too long to view another total solar eclipse — the U.S. will see the moon cover the sun once again on April 8, 2024, and the path of totality goes straight through northwestern PA.

But for now, the team is thankful they successfully launched their balloon and captured high-definition video of the eclipse despite the few hiccups.

“We spent a year building up to this, just to have this two minute event,” Clark said. “And the sun was not blocked, we saw the shadow bands — it’s just like, everything came together at the last minute — second, literally.”

For Clark, like many of the team members, the eclipse was more than just something they’d been waiting to see in order to test the theory.

“I have to admit — it made me much more emotional than I expected,” Clark said.