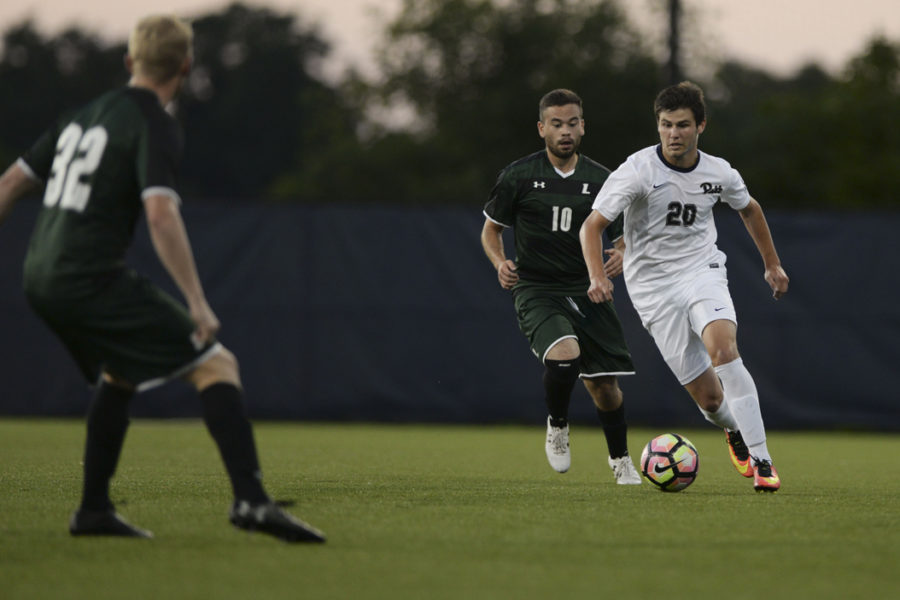 By Wyatt Geller / For The Pitt News

After finishing 2-13-3 in head coach Jay Vidovich’s first season, the Pitt men’s soccer team hoped to make drastic improvements this year and notch their first-ever ACC win. After this weekend, though, the team looks similar to the 2016 squad, as it dropped a pair of games in Columbus, Ohio to start the season.

Both games finished at 1-0, as the Panthers’ (0-2) offense failed to find the back of the net despite averaging over 10 shots per game. Offensive production has been a big issue for the Panthers in recent years, and even though they didn’t score, it’s encouraging they applied consistent pressure in both contests.

With the clock winding down in their opening game of the season, the Pitt men’s soccer team appeared to be going for overtime against the Ohio State Buckeyes. But with under a minute to go in regulation, Buckeyes midfielder Marcus McCrary — a substitute — crossed the ball to the far left post to forward Michael Prosuk, who buried it top shelf.

Despite the outcome, the Panthers generated most of the opportunities of the day — recording 16 to the Buckeyes’ six — something Vidovich reflected on afterwards.

“We created more corners, we dominated them defensively and turned them over when we needed to and we pressed them,” said Vidovich.

The Panthers got their first shot on goal in the seventh minute, as junior midfielder Joshua Gaspari’s ball was saved by redshirt sophomore goalie Parker Siegfried.

The team continued to apply pressure throughout the half, pelting OSU with shots. Only one other ball got through to Siegfried though, as the Buckeye defenders managed to get in front of six Pitt shots.

On the other side, Pitt redshirt sophomore goalie Mikal Outcalt had a pretty inactive 45 minutes. He only faced one shot on goal — a 44th-minute header by junior midfielder Abdi Mohamed — and came up with the save to send his team into the half tied at zero.

The defensive battle continued at the start of the second half, with neither team able to generate much of anything offensively. In the 61st minute, Panther freshman Marcony Pimentel registered the first shot on goal, with Siegfried again making the save.

Buckeyes head coach John Bluem clearly wanted the duo to push forward for the win, and as a result, the team had one of their best offensive stretches of the game.

In the 90th minute, Prosuk ran into the box towards the post and received a cross from McCrary. Prosuk buried the shot behind Outcalt, crushing the Panthers’ hopes and delivering the Buckeyes the 1-0 win.

The Panthers’ early deficit proved too much for the team to overcome in the Sunday afternoon game against the James Madison Dukes. Pitt fell in its second game of the season 1-0.

The Dukes opened the game with relentless shooting efforts. This didn’t prevent the Panthers from taking their own shots, with the first coming from first-year Colin Brezniak.

As the game progressed, the physical play stepped up and resulted in a Pitt foul, followed by a yellow card for Pitt senior Matt Bischoff nearly 14 minutes into the game. JMU followed suit 20 seconds later with a foul and a yellow card for junior Soheyl Alipour-Rafi.

Pitt followed the fouls with consecutive shots by sophomore Josh Coan and Pimentel, respectively. Both shots were saved by JMU goalie T.J. Bush.

Bush’s saves turned the game over to the Duke’s offense, resulting in nearly 10 minutes of JMU-controlled play.

JMU redshirt junior Billy Metzler scored his first goal of the season from 12 yards out just over 34 minutes into the game, putting the Dukes in a 1-0 lead.

The Panthers attempted to clear the deficit, but junior Javi Perez’s shot was saved by Bush and would be the last from Pitt in the first half.

The second period of play took off with three shots from the Dukes. The Panthers managed to get the ball under their control, resulting in two corner kicks.

Pitt’s fouling in the second half more than tripled from the first. In the first half of the game, the Panthers received three fouls, while in the second they ended up with 11. The physical play of both teams picked up in the second 45 minutes.

JMU picked up its second yellow card nearly 13 minutes into the second half, this time for sophomore Tim Estermann. They received another yellow four minutes later for sophomore Fernando Casero and one seven minutes after for junior Aaron Ward-Baptiste.

Regardless of the Dukes’ transgressions, the Panthers could not get a shot on goal. Even following a corner from Perez in the 71st minute, no attempt was successful. The next shot from Pitt came with six minutes remaining in the game. Senior Pol Planellas got a foot on the ball, but his shot went high.

After a foul from Pitt and two from the Dukes, JMU sophomore Manuel Ferriol and Planellas received simultaneous yellow cards as Pitt went on to lose its second game, 1-0.

The Panthers return to Ambrose Urbanic Field on Friday, Sept. 1 looking to get their first win of the year against the Longwood Lancers. Kickoff is set for 7 p.m.