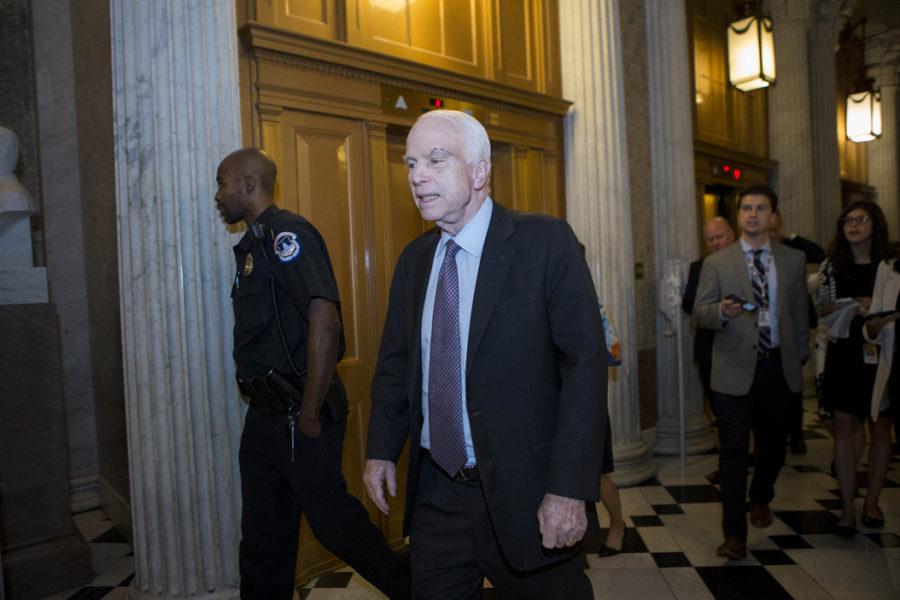 Sen. John McCain (R-Ariz.) walks to the senate chamber on July 28, 2017 before voting against the Skinny Repeal bill, which would have repealed the Affordable Care Act. (Alex Edelman/Zuma Press/TNS)

How does something extremely unpopular become law in our democracy? Congress.

Over the past few months I have attempted to keep up with fast-paced news like the GOP’s health care bill’s rapid push through Congress by Mitch McConnell or the votes on the Restoring Internet Freedom Act — two bills that were wildly unpopular among constituents, both liberal and conservative. And with every headline I wondered why our representatives — with clear nationwide opposition to these bills —continue to ignore us?

The widespread disapproval of these bills amongst the American people versus the relatively wide approval in Congress shows the clear influence of money and political parties in politics. Though these issues may always exist in some form, the power of each vote has the potential to significantly weaken the influence of the corporations, donors and traditions that influence our representatives.

In its final form, Trumpcare was set to deprive 23 million people of health care, according to the Congressional Budget Office. Those suffering from an addiction to opioids or from serious mental illnesses would have experienced a serious lack of care. The poor, the sick, the elderly and survivors of sexual assault would have needed to pay significantly more over the next decade. The bill would have even cut Medicaid, hurting a large portion of Trump’s rural, white voting base.

The Restoring Internet Freedom Act, if passed, would be a devastating blow to the American people and the principle of net neutrality. This would give internet service providers like Verizon the ability to provide faster internet for their own services, translating to slower speeds and higher costs for everyday Americans. Hiding this in a bill about “internet freedom” is something few Americans support — in fact, 61 percent of Americans supported net neutrality according to a May Morning Consult poll.

The second reason arises from the fundamental problem of mixing money with politics. Because of our representatives’ constant need to fundraise for their campaigns, they often fall short on promises made to the American people in exchange for money and favors from large corporations and donors. This influence is evident in the cases of both these unpopular bills.

The only threat that truly holds any weight against our representatives is that of a loss of votes for reelection. Though money in politics may be the root of the issue, there is no better way to drive that from our politics than to advocate for what we voted for and what we believe in.

Our voices do not and cannot stop at the polling booths. It may be easy for our senators to say they see a bigger picture and give us facts that may cause us to rethink our beliefs — something everyone should do now and again — but it is far more important to stand by the values we elected our representatives to represent.

Continue to call your senators and house members who supported Trumpcare and push them to support what you elected them to represent. Continue to demand from your representatives clearer information and more loyalty — not to their parties, but to their constituents.

Next time you call one of your representatives that voted for the AHCA or supported the RIFA or anything else you don’t feel you elected them for, let them know your discontent. It’s our civic duty to a country that runs on a representative democracy, not silence.

Saket primarily writes about politics and social justice for The Pitt News. Write to Saket at smr122@pitt.edu.