Perez on the pitch: Adjusting to studies, soccer 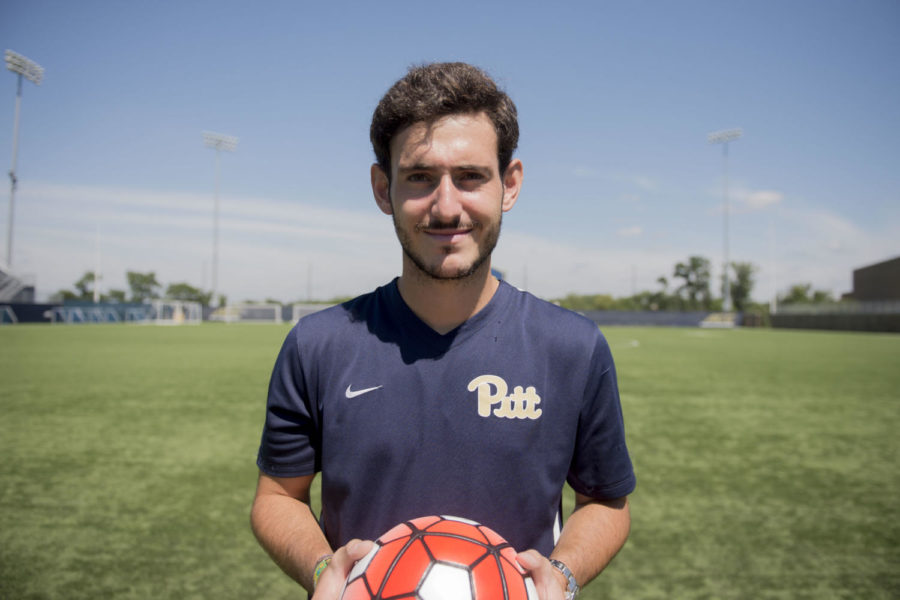 For Pitt midfielder Javi Perez, the atmosphere at the Petersen Sports Complex is a lot different than what he is used to.

The green of the turf beneath his feet is the same, as are the meshy nets of the goals, but in Spain, soccer — correction, futbol — is a bit different. At a top collegiate level, everything is bigger, from the stadiums to the fan bases, reflecting the rich culture of the sport.

Perez, a junior transfer, is kicking off his first season on the men’s soccer team after a near lifelong run with Valencia Club de Futbol, a top-tier youth team in Spain’s third largest city. He began playing for the elite academy when he was only 4 years old.

“My cousin and I were playing in my house, and one day my dad told us, ‘you’re going to play for this club,’ and so we did,” Perez said.

Perez played for the club for 15 years — serving as team captain for 12 of them. He is a natural leader, according to Pitt soccer head coach Jay Vidovich, both on and off the field.

“He is a mature, ambitious, goal-oriented young man,” Vidovich said of his new recruit.

While playing for Valencia, he was on track join a professional league before he sustained a traumatic knee injury at age 19. As a result, the youth team dropped him, and he decided to join a lower-level, second-division club as he healed and re-conditioned.

Then, he had a choice: stay in a club that would not serve his goals, or turn to other avenues outside of his home country.

“It’s a tough spot because it’s lower-level pay, and it’s not the glamorous sport we all watch on TV,” Vidovich said. “It’s a grind.”

While on a visit to America to watch the Columbus Crew — a Major League Soccer team based in Columbus, Ohio — Perez made a stop in Pittsburgh to practice with the United Soccer League’s Riverhounds and explore the city. From there, he got in touch with Vidovich, who was starting to rebuild Pitt’s struggling program.

Vidovich eventually traveled to Spain to visit Perez, taking the time to meet his family and friends, as well. They decided that him pursuing an education in America, at Pitt, was what Perez needed to get back into the game and prepare him for the future.

“In Spain, it is very difficult to combine studies and the sport,” Perez said. “But here you have a lot of opportunities to handle both very easily.”

Perez is still working on adjusting to being a student-athlete in the United States. He now handles a full-course load on top of training with a new team — one which doesn’t have the storied history of Valencia.

Since the Panthers joined the ACC in 2013, the team has never won a conference match. They also haven’t had a winning season in over 10 years — with the last one coming in 2000 under former coach Joe Luxbacher.

This is all new territory for Perez, whose entire career — outside of the injury —  was filled with success.

“He said he was ‘game on’ for the challenge of trying to build a program,” Vidovich said. “That’s the kind of guy he his, he didn’t want to go to a place that was an established winner, he wanted to help us with our project.”

And he’s already making an impact.

After arriving, Perez quickly became one of the leaders on the team, earning him the honor of being one of two team captains, along with senior defenseman Bryce Cregan. Through his passion for the game, he has brought a different type of energy to the group.

“Whether it’s the passion for soccer in his blood, or that he’s very ambitious, or that he’s a really good person and leader, he’s been a major factor in turning our culture around,” Vidovich said.

In his free time, Perez hasn’t been doing much aside from soccer. He admits he misses his family in Europe — especially his older sister, Ana, whom he is particularly close with. But to him, the opportunity of getting a degree while playing soccer is worth the time away.

“They are very proud of me. Not everyone has the opportunity to go to the United States, go to a school like Pitt, and play futbol, too,” Perez said. “They are very happy because I am happy.”

His sister said he has been playing soccer for as long as she can remember, and that it became an intrinsic part of their family as they grew up together.

“We travelled with him every time he had to play a match, and we supported him in every way,” she said in an email. “I love watching him play, and now that I can’t, I miss it quite a lot.”

They communicate as much as possible — talking on the phone and over video every day — and try to visit each other as much as work, school and soccer schedules allow.

So far, though, his choice to move to America has been paying off. The weekend before his second semester of college classes began with a return to Columbus for two games in which he spent every single minute on the field.

But despite his admirable effort, he wasn’t able to lead the Panthers to a win in its first weekend series, losing 1-0 to both Ohio State and James Madison.

Even so, he’s thrilled to still be able to play the sport he loves. To him, no matter where he plays, or what it’s called, it’s the same game.

“Once you get on the field, futbol is the same around the world,” Perez said. “I was nervous, but I was also very excited to come here. It’s a new opportunity, a new life.”