Leave it to Lyke: Six months of progress 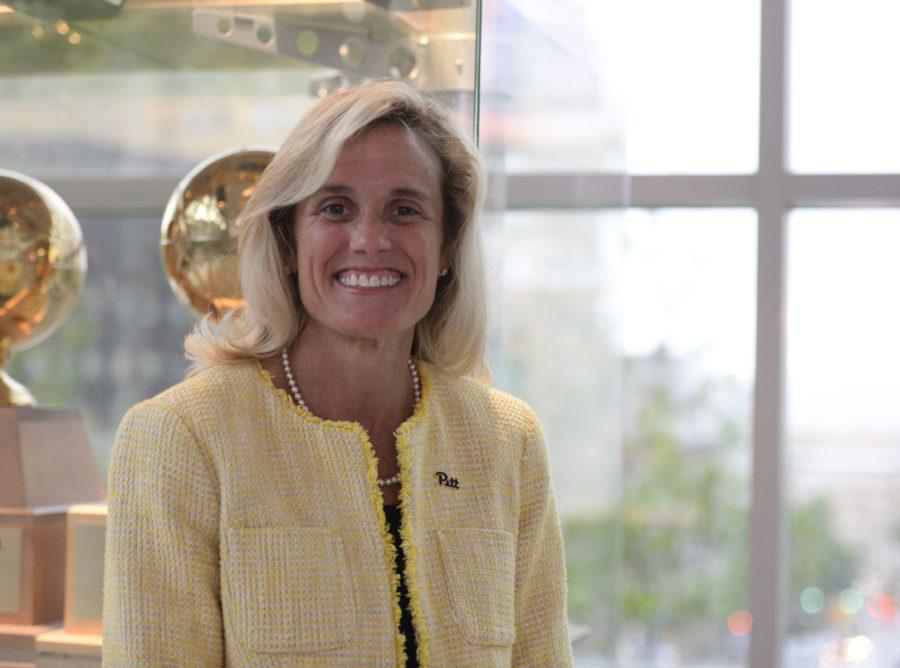 When Scott Barnes resigned as athletic director last December, the Pitt athletic department was left without a leader for the second time in two years. Over the next five months, three head coaches had either retired or been fired, and the basketball program was in shambles.

Things were looking down when Athletic Director Heather Lyke joined Pitt in March of 2017, but after her first six months, she’s managed to bring a new sense of stability to the Panthers. Still, there’s a lot of work left to be done to improve the teams’ results and better the department all around.

Prior to arriving at Pitt, Lyke served in the same capacity at Eastern Michigan University for almost four years. From hiring new coaches such as Chris Creighton to increasing fundraising efforts, she began to rebuild the football program, turning it from one of the worst in the Mid-American Conference to something beginning to thrive.

As the head of Pitt Athletics, she’s had no problem making herself at home. She immediately began filling vacant positions in both coaching and executive roles.

Her first big hire came in April when she announced Keith Gavin as wrestling head coach. Gavin was a former national champion at Pitt in 2008 and most recently was an assistant coach at Oklahoma University.

This decision was made within a month of her arrival, but it was a priority following the team’s incident in December which resulted in the firing of coach Jason Peters.

Lyke also appointed two more coaches in June, hiring Samantha Snider as the Pitt gymnastics head coach and Katie Hazelton as the diving head coach. The two took over for a pair of extremely successful coaches in Debbie Yohman and Julian Krug, respectively, and the new hires will be crucial to continuing that success.

Looking at these quick hires, it’s clear Lyke isn’t one to relax and take her time on important issues, even when it comes to filling executive positions. But it doesn’t hurt having former colleagues from Eastern Michigan University willing to follow her.

So far, three of Lyke’s four upper-administration hires have come from EMU. She began recreating her team in May when she hired Christian Spears as the deputy director of athletics for external affairs, followed by two more former colleagues in June with Chris Hoppe and Kelly Brennan.

With this trio following her, it seems Lyke is attempting to reproduce the structure and feel of her former department. But will she be able to take Pitt, as an overall project, further than her previous school?

Whatever the result, it should be good news for football Head Coach Pat Narduzzi and the program. Lyke’s attentiveness to football has led to success all throughout her career. So, one of her key focuses should continue to be getting the football team to compete with the best and have an increased presence in the city.

She accomplished this task with EMU — a previously stagnant and less prominent program — so one can only imagine what she’ll do with a team already on the rise.

Overall, the willingness of Spears, Hoppe and Brennan to follow Lyke bodes well for the Panthers. Since many of her administrators already know how to best work with one another, they can formulate and develop ideas from their previous jobs in a more succinct manner.

And that will be needed as the department moves past its rebuilding phase. Now, her attention should turn toward providing each of the Panthers’ 19 programs with the resources they need to get to the next level.

This would all help the department improve as a whole and in the Directors’ Cup — an annual ranking of athletic departments across the country. The cup highlights institutions that excel in athletics, taking into consideration 20 teams — 10 male and 10 female — at each Division I school and awarding points based on on-the-field achievements.

Essentially, the more points a school receives, the better the quality of its athletic program. When a school receives low scoring or no points for one of its teams, this indicates a potential issue.

In the 2016-17 academic year, the Panthers finished 92nd in the country and second worst in the ACC. The winter sports were by far the team’s best, racking up 111.5 points. Fall was next with 75, while the spring teams managed only 29.5 — all of which were contributed by the men’s track and field team.

This isn’t quite a surprising result, either. In the 2014-15 standings, the Panthers placed 96th while finishing slightly worse one year later at 110th. Considering everything, this year was a bit of an improvement for the department, but there’s obviously still a long way to go.

Success of the individual teams is tantamount to the success of Pitt Athletics. For Lyke to continue on her path of renovation, she can’t lose sight of improving the overall reputation of the school’s sports.

Of course, this will be a long process. But if all goes well, she might be able to make progress as she did at EMU and turn Pitt into an all-around success. She’s explained her vision well, but now she has to follow through — with the real challenges just beginning.