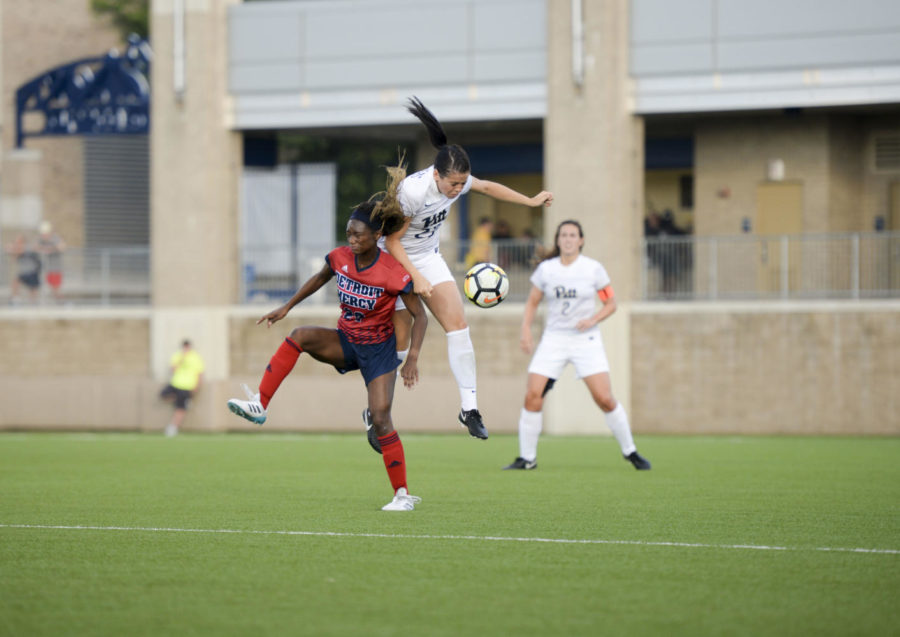 With its third win of the season, the Pitt women’s soccer team surpassed its previous season’s winnings while maintaining an unbeaten record.

The Panthers (3-0-2) took on the Detroit Mercy Titans (2-1-1) Wednesday night at the Ambrose Urbanic Field. Pitt’s total shots nearly tripled those of its opponent, boasting 20 to the Titans’ seven. Detroit’s goalie had nine saves to Pitt’s three. In other categories, the teams remained relatively even, with two corner kicks for Detroit, three for Pitt and 10 fouls for each.

“I think today we moved the ball around pretty well more than we have in the past,” Pryce said. “I think at the end of the day if we play well and connect well as a team, that opportunities will open up and space will open up to get those goals in.”

The first half opened with rapid and intense shooting from the Panthers. Pitt rattled off a total of five shots just 13 minutes into the game. Although none of the shots gave the Panthers the offensive advantage they were looking for, their attempts demonstrated how prepared they were for a fight.

While the beginning of the half didn’t see much action initially, both teams defended well and kept the ball out of the net. As the half progressed, the Panthers started to break down the Titans’ defense, finding holes for quick passing.

Linking together a solid set of passes from redshirt junior Seyla Perez and junior Kaylee Rabatin, the Panthers moved the ball through Detroit’s defenders. Schmidt rocketed the ball into the bottom right corner for a goal in the 44th minute. She gave her team a 1-0 lead at the end of the first half.

Even though Schmidt did not start, she managed to get the first goal of the game. Pitt head coach Greg Miller saw tonight’s performance as an indication of the positive effect substitutions can have on his players.

“It only boosts their confidence to be able to come in [from] a reserve role and get points for the team,” Miller said. “So that kind of experience and confidence is gonna carry forward on into the ACC.”

The second half began just the way the first ended — a quick play set up by a Perez throw-in to first-year Vildan Kardesler. Pryce serviced Kardesler’s pass and slotted it home with her left foot to give Pitt a 2-0 lead in the 47th minute.

Pryce also created many opportunities throughout the game and almost capitalized off a bad back pass from a Detroit defender soon after she scored.

The Titans didn’t get their first shot on goal until late in the second half when they took advantage of a questionable penalty call. Senior Rachel DeLuca sent the shot past first-year goalie Katelyn McEachern to bring it back to 2-1 in the 74th minute.

After an easily missed chance by Kardesler to finish off the game, sophomore Christiana Davey scored. With an assist from Pryce, Davey scored with less than five minutes remaining, effectively putting the game to bed at 3-1.

Davey was another one of Miller’s game substitutions. She replaced Schmidt in the 77th minute and, in less than 10 minutes, scored the final goal of the game.

Miller was ecstatic after the win — his girls remained undefeated after five games. He especially praised his two substitutes, Schmidt and Davey, for both scoring crucial, game-winning goals.

“I think the biggest difference for us was our energy: on the bench and on the field it was consistent,” Miller said. “As we move players into the game, they bring that energy that they had on the bench onto the field, and we were able to establish some pretty consistent pressure and we got some good goals out of it.”

Pryce was a standout player, scoring both her own goal and assisting Davey’s. All of the redshirt junior’s five shots were on goal. The only other player to come close to Pryce’s performance was Kardesler. She racked up three shots, but only one was on goal. She did, however, assist Pryce’s goal.

Although he was happy with the win, Miller believed that the team needed to work on a specific parts of its performance.

“I think we’re still working on playing a full 90 minute match,” Miller said. “As you can see when we were up 2-0, we were a little too complacent, a little too relaxed — but credit to our team, we were able to get that last goal and put the game away.”

The Panthers remain in Pittsburgh for their next game to host Illinois State at 1 p.m. on Sunday, Sept. 3.