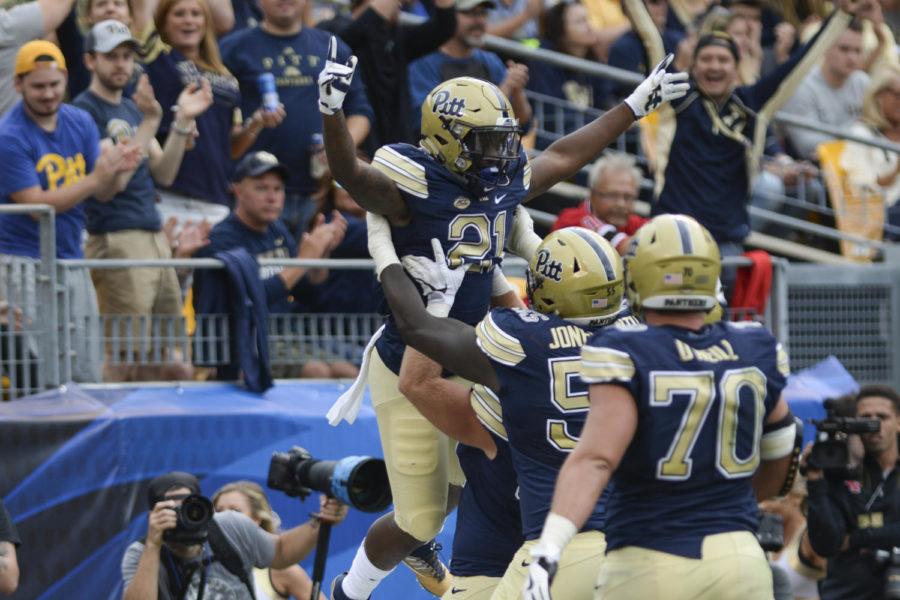 Leading by seven in overtime against the Youngstown State Penguins, Pitt redshirt freshman defensive back Bricen Garner made a leaping interception in the end zone, ending the Penguins’ drive and giving the Panthers their first win of the season, 28-21.

The Pitt football team (1-0) opened its 2017 season facing off against the YSU Penguins (0-1). Following touchdowns on their first three drives, the Panthers showed weaknesses on both sides of the ball in the second half and allowed YSU to creep back, only to pull it out in the end.

“It’s nice to have adversity because you can find out how your guys are going to react,” Pitt head coach Pat Narduzzi said. “You couldn’t have ended it in any better way.”

After a 28-yard kickoff return by junior wide receiver Quadree Henderson to start the game, redshirt junior running back Qadree Ollison moved the team into Youngstown territory. He hurdled over a defender for a 30-yard catch and run on the third down.

Later in the drive, Ollison rushed for his first touchdown of the season and put the Panthers up 7-0 with 9:48 left in the first quarter.

With a quick response, Youngstown State took advantage of senior cornerback Avonte Maddox to find a wide open receiver down at the Panthers’ 37-yard line. The defense held firm, and the Penguins — just outside field goal range — were forced to punt it back.

Again, the Panthers moved down the field with a series of rushing plays. At the Penguins 35-yard line, redshirt senior quarterback Max Browne made his first big throw of the game — a 30-yard pass to redshirt senior tight end Matt Flanagan. Ollison capitalized, bouncing a handoff to the outside and walking into the end zone to put Pitt up 14 at the end of the first quarter.

In the Penguins’ next drive, they found holes in the Panthers’ secondary, but junior kicker Zak Kennedy missed a 43-yard field goal to keep the score at 14-0.

After converting the fourth down, Henderson took a handoff down the right sideline, moving the Panthers to the Penguins’ 33-yard line. The Panthers finished off the 16-play 74-yard drive, going up 21-0 on a 1-yard rush by first-year A.J. Davis with 3:07 left in the half.

On the ensuing possession, Youngstown State went over on downs, and Pitt was content to run out the clock, entering the locker room with a three-possession lead.

Youngstown State received the ball to begin the third quarter, but a third-down incompletion by Wells forced the team to punt it away quickly. Taking over at their own 23, the Panthers’ offense moved the ball across the 50-yard line. They couldn’t convert on third down and two, forcing them to punt it back to the Penguins.

After two big plays to put the Penguins inside the Panthers’ 40-yard line, three misfires forced the Penguins into going for a fourth down to keep their drive moving. They converted on a pass to senior wide receiver Alvin Bailey, and a few plays later, they got on the board with a touchdown run by junior Tevin McCaster. The Panthers’ lead was down to 14 with 4:44 to go in the third.

Youngstown State got another stop on the ensuing possession and, after regaining possession, quickly moved the ball into Pitt territory.

Two straight incompletions brought up another fourth down and long, and this time, Youngstown State decided to punt. The kick was deflected by Pitt’s defensive line, and redshirt sophomore linebacker Jazzee Stocker caught the ball and returned it all the way to the Penguins’ 4.

After being stifled twice at the goalline, Browne took a sack to force the Panthers to take a field goal. Freshman kicker Alex Kessman was brought on for the 28-yard field goal, but he missed it right, keeping the score at 21-7.

Given another chance to make things close, Wells and the Youngstown State offense drove right down the field. The Penguins scored their second touchdown off first-year running back Christian Turner’s reception down the sideline.

With their next possession, the Panthers advanced the ball to midfield, but on third down and three from the 50, the Penguins pash rush got to Browne, jarred the ball loose and took possession at the Pitt 42-yard line with a chance to tie or win the game.

“I think one of the sacks, they just called a timely blitz, which was good for them toward the goal line,” Browne said. “I think part of it is me getting the ball out of my hands faster, but I guess we’ll look at the film and fix it from there.”

The Penguins did just that. They scored on a 42-yard reception by Turner and opted to kick the extra point, tying the game at 21.

On the next possession, Browne escaped the pocket on a third and long, but was tackled just short of the first down marker, bringing up fourth down and one.

Browne handed it off to Davis, who went up the middle and picked up the first down. Two plays later, the Panthers benefitted off a roughing the passer call to advance to the Youngstown 42-yard line.

After moving closer into field goal range, Kessman missed a game winning field goal as time expired to send the game into overtime.

“[Kessman]’s a freshman, he’s learning too,” Narduzzi said. “He’ll be so much better. He’s a tough kid and I don’t worry about him at all.”

Pitt got the ball first in overtime and faced a critical third down and eight from the 11-yard line. Browne found redshirt senior Jester Weah, who made a leaping catch in the end zone for a touchdown. Kessman made the extra point, putting Pitt up seven.

With one chance to respond, Youngstown took over at Pitt’s 25 and moved inside the 15-yard line with three rushes by McCaster. On first down and 10, Wells took a shot to the endzone, but Garner picked off the pass to deliver the win to the Panthers.

Overall, this was not the performance the Panthers were hoping to have going into their matchup against in-state rival Penn State next week. The team’s two biggest question marks — Browne and the secondary — didn’t show much promise as Browne only put up 140 yards passing and the Penguins outgained the Panthers by 70 yards.

“We just did a poor job executing offensively,” Ollison said. “We had a big turnover by [Jazzee] Stocker, getting us down to the 5-yard line, and we don’t score… We just have to do a better job of executing.”

If neither Browne nor secondary improve by next week, it could be a long day for the Panthers as the Nittany Lions are expected to have one of the best offenses in the country. The game kicks off Saturday, Sept. 9,  at 3 p.m. in Beaver Stadium.

“For the guys that played [Penn State] before us, seeing how they battled with them and just the great rivalry, I’m looking forward to it,” Weah said.