All in a day’s work: Students prepare ‘Annie’ in 24 hours 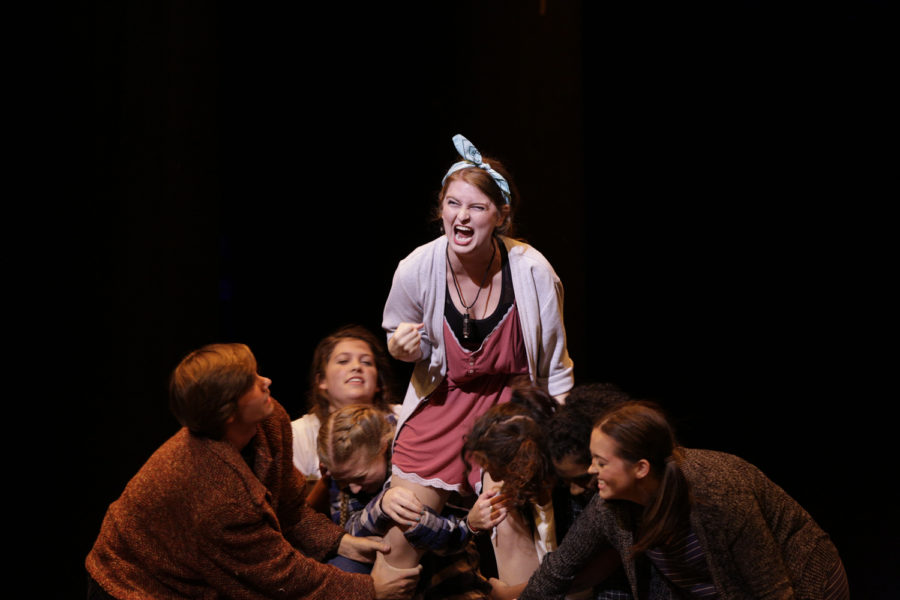 By Caroline Bourque and Salina Pressimone | The Pitt News Staff

Maddie Dillen ventured into the theater on Friday night with a mixed look of confusion and excitement as she searched for a few familiar faces.

Having attended only one meeting so far for the Musical Theatre Club, she didn’t know what to expect, but she was ready to find out.

“It’s a kind of organized chaos,” Dillen, a first-year, said during rehearsal. “The directors know what’s supposed to happen, but the actors don’t — we’re sort of herded.”

Pitt’s Musical Theater Club held their fourth annual 24 Hour Musical on Saturday at the Charity Randall Theater in the Stephen Foster Memorial which involves rehearsing and putting on a student-run production in less than one day. With only a few hours of practice, the students entertained a crowd of more than 400 people with a whimsical performance of “Annie.”

Planning for the rushed performance started in May, according to MTC President Braun Taylor, when the club began searching for a musical they could throw together in one day.

Director Ann Amundson and the choreographers held auditions Sept. 3. And each of the cast members received their assigned roles Friday evening — Dillen received the role of Dog Catcher.

After quickly getting acquainted and doing a complete read-through of a script they hadn’t been able to closely examine until now, the cast and crew split off into groups and got to work. They rehearsed until about 10:30 p.m., headed home for some rest, and returned promptly Saturday morning at 8 a.m.

The rights to the show cost $1,200, the funds for which the Student Organization Resource Center and Student Government Board provided. Beyond copyright finances, the organizers of the 24 Hour Musical needed to operate on a frugal budget.

“We try to have a zero-dollar budget,” Taylor said. “It’s a lot of using what we [already] have.”

From DIY costumes and makeup, to a backdrop recycled and repainted from last year’s production of the “Rocky Horror Picture Show,” the final product was the result of multiple student organizations collaborating to reach a common goal — stretching their musical performance skills and entertaining a variety of viewers.

That final product — the 24 Hour Musical — came together with the help of the United States Institute for Theater Technology, the Performance Collaborative, the Redeye Theater Project, Pitt Tonight and Ruckus, with roughly 70 to 80 people involved. It was the first time that the 24 Hour Musical incorporated a full pit orchestra made up of student musicians. The Pitt improv group Ruckus delivered a 30-minute warm-up act prior to the show.

Then, at 8 p.m., the cast took the stage, scripts in hand and makeshift costumes perfected for the show. Actors such as Sarah Fling as Miss Hannigan and Dustin Butoryak as Oliver Warbucks animated the stage with smooth renditions of their characters and the occasional improvised reaction.

The crowd laughed as Jessica Israel, vice president of Ruckus, brought human traits into her role as Annie’s dog Sandy, dancing along to the score and switching between walking upright and on all fours.

Throughout the production of “Annie,” the crowd reacted with the most enthusiasm at moments when actors forgot lines and props malfunctioned, which forced the performers to improvise. Audience member Charlotte Fallick, a psychology and English major, said her favorite parts were these spontaneously performed moments.

“It’s like SNL — the funniest parts are when the actors break, that’s why it’s funny,” Fallick said.

For many of the cast members — including Alison Hnatow, who played the lead role of Annie — the 24 Hour Musical was their first musical experience at Pitt. First-year Hnatow had prior experience with theater at her high school in Downingtown, but had never been assigned such an iconic lead.

“I was a little overwhelmed when they went from the bottom and announced all the ensemble. Once they got to Warbucks, I figured they either forgot me, or I’m Annie,” Hnatow said. “I did not believe it.”

As a political science major, Hnatow plans to pursue theater as a hobby. The excitement and spontaneity of the 24 Hour Musical encouraged her to audition.

According to Amundson, that was the goal.

“I wouldn’t even say the point of it’s to grow. It’s just to have fun and do something exciting and interesting and learn from it,”  the director said. “If I learn nothing, I would still have had fun.”

Amundson, a junior theatre arts major, has been involved in the 24 Hour Musical for the past three years. With her prior experience as the show’s assistant director, the groups involved came to the consensus that she would be the director this year.

Amundson explained that the most difficult challenges on such a tight schedule are communicating effectively and keeping the cast optimistic.

“Just keeping spirits up is a lot harder than just in a normal rehearsal, because normally they’re working eight hours a day and perfecting,” she said.

While the pressure to learn and rehearse a script within 24 hours presents its challenges, the restricted time frame is, in fact, a practical opportunity for many of those involved.

Madeline Burns, a senior accounting major and business manager of Redeye, said musically talented students can use the 24 Hour Musical — and Redeye during the rest of the year— to their advantage.

“For those of us who don’t have the time commitment, this is pretty much it,” Burns said. “I like to call it your ‘theater fix.’”