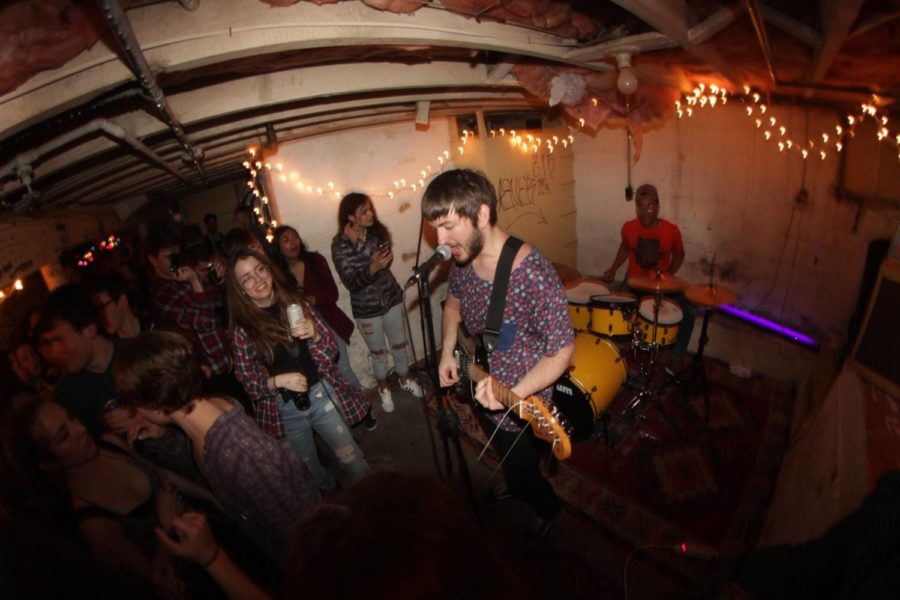 In an Oakland basement adorned with Christmas lights, a two-person “mosh-pop” outfit jams in front of a sweaty crowd of college students.

The crowd moshes to the fast-paced, resounding tunes as the guitarist wipes beads of sweat from his forehead.

“When it’s just me on guitar, it sounds like a pop song. But then when you add in Joziah on drums, it becomes something totally different, and the performance has an entirely different energy,” Hartman said.

Some of their pop sound comes from the genre of surf rock — a retro blend of rock and pop popularized by bands such as The Beach Boys in the early 1960s. Council said they pull a lot of inspiration from surf rock — the inspiration for the duo’s band name — though their music doesn’t fit perfectly into the genre.

“I think we are a little darker with the drums and baselines, and you can’t really mosh to surf rock,” Council said. “So I think mosh-pop is a pretty good name for what we are now.”

Their mosh-pop sound comes from the combination of Hartman and Council’s drastically different musical backgrounds.

“[Hartman] definitely brings the rock side of things, but oddly enough I come from a gospel background and I was trained to be a gospel drummer,” Council said. “I think what makes it surf bored is that we can bring these things together. We can kind of just get together and create.”

Hartman said his inspiration for Surf Bored’s musical style comes from bands and artists he describes as his heroes, like the group Waves and solo artist Jackson Scott, whom Hartman recently got to meet.

“Last May I was […] at Mr. Smalls and [Scott] was there behind me for some reason. I introduced myself and now we’re friends, I guess,” Hartman said. “He actually played at my house a few weeks back.”

With their particular tastes and upbringings, they say that all music — even the stuff that may not necessarily be in line with their sound — can be inspiration. As the music director at the Pitt radio station WPTS, Hartman describes himself as someone who appreciates all kinds of music.

“There’s a lot of stuff I love where I listen to it and think ‘this is like nothing I would ever create myself,’ but even in that stuff I can recognize what works and try to adapt it to whatever we’re working on,” Hartman said.

While most of that inspiration comes from other artists and genres, Surf Bored at its heart is still inspired by its members’ high school roots.

Hartman and Council met at Beaver Area High School and first formed a group called Danny and the Wolfgang, where they served as the main act in a collection of weddings, wine tastings and local festivals. After their junior year of high school Hartman recruited Council as his drummer to perform in his solo project, and the two have been Surf Bored ever since.

Surf Bored’s success continued after high school, and they soon graduated from performing at prom to taking over the venues of Pittsburgh’s DIY scene — a community of local bands who record their own music.

“I’ve noticed that as far as [the DIY scene] everyone has been just really nice and inviting,” Hartman said. “You can tell that everyone there just really cares about supporting the arts and it doesn’t really matter what how big you are or what your notoriety is.”

Bands in the DIY scene — which is made up of artists around the city, especially in Oakland — can be heard at venues such as the Bushnell or Roboto, or just a random Oakland basement. The communal nature of these venues breeds a kind of camaraderie and mutual support system among groups, making animosity a hard thing to come by, the band has found.

Surf Bored has only had one run-in at a show — a mystery perpetrator at Bushnell’s Pitt Fest stole Surf Bored tapes from the band’s merch table.

“It’s weird because you need to know what they were, have a facility to play cassette tapes, and also want to steal them,” Hartman said. “We only have beef with literally one person, and we don’t even know who they are — which says a lot about how friendly and inviting people have been.”

Beside all of the friendly people and memorable stories, the DIY scene mainly focuses on the performances. Hartman and Council attend a lot of shows outside their own, and consider themselves huge fans of the other bands around Pittsburgh.

“I think that as far as the other acts that stick out, Jack Stauber is like nothing else I’ve seen,” Council said about the prolific Pitt musician. “Like he’s just such a unique performer, and on top of that his voice is insane.”

As far as their own performances go, the band has a real knack for making a lot of noise and energy.

“We are only a two piece group, but in our past few shows we are getting the crowd just as hyped for us as they are for the other four and five piece acts around,” Hartman said. “It’s really a cool thing to be able to fill up that same room with the same amount of sound even though we’re so much smaller.”

Ben Hoover, a junior at Pitt majoring in film studies, films live shows for WPTS. As a regular attendee of the DIY duo’s shows, he can attest to their stage presence.

“Surf Bored is one of the most energetic bands performing in Pittsburgh now,” Hoover said. “Everytime I see them perform I think, ‘there is no way they can top that energy next time,’ but they always do. They never disappoint and they always rock.”

Council and Hartman both agreed that their favorite songs to perform are “Black and Blue,” “Phantom Love,” and “Crawling” off their previous albums, but are having the most fun with the tracks they are working on now.

“I think every song on this new album we are working on is our hypest thing yet,” Council said. “Like it feels like we are really finding our creative space, and this new stuff is what we really want to be doing. It’s been the most fun we’ve had performing yet, and we are really excited about it.”

Their album “Molly Cool” will be out sometime in late January or early February, but they intend on releasing an EP of three to four songs at some point in October. They plan to play Juke Records on Sept. 16 and at James Street Gastropub and Speakeasy on Oct. 6.

“We love everything that we’ve done so far, but I think that the best is still on its way,” Hartman said.