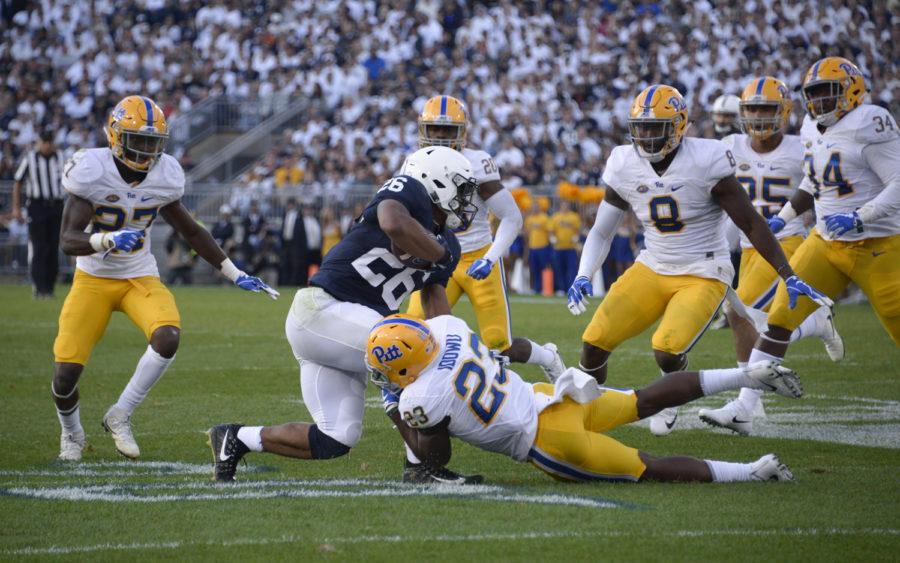 Following Saturday’s game against rival Penn State, The Pitt News sports staff looked at a few specific aspects of the football team’s game — offense, defense and head coach Pat Narduzzi’s — and how they will need to adjust as they take on Oklahoma State this weekend.

Here are a few of our takeaways on the Panthers two games into the season:

Pitt’s offense is caught in a very weird quarterback limbo. Redshirt senior Max Browne’s inability to throw the ball effectively cost them last week. And when he did throw the ball well, receivers dropped his passes. From what we’ve seen so far, redshirt sophomore Ben DiNucci runs the offense better, but for reasons unknown to us he hasn’t earned the keys to the car. After this week I expect that to change. -Abbot Zuk

A few times during Saturday’s game against Penn State, offensive coordinator Shawn Watson opened up the playbook and started having his team throw the ball past ten yards. Hopefully Watson lets his quarterback try to make some plays this week, allowing him to let it rip against a mediocre Oklahoma State secondary. -Adin Link

After Pitt’s explosive offense last year, this year looks completely different. The team lacks depth, and if running back Qadree Ollison gets seriously injured this unit is going to suffer due to lack of experienced replacements. The Panthers got a preview of what could happen when he was hurt and out for a series of plays against PSU. -Kevin Bertha

Oklahoma State might hang a crazy score on Pitt Saturday, but it isn’t time to panic yet. Linebackers Oluwaseun Idowu and Saleem Brightwell and defensive lineman Dewayne Hendrix both turned in solid performances Saturday. The defense was better than it should’ve been considering Penn State’s great field position all day. Also, the team can look forward to defensive back Jordan Whitehead coming back against Georgia Tech after his suspension. -Grant Burgman

The secondary is still terrible, and so is the coverage from linebackers. Pitt will have one of the worst pass defenses in the country this season — again. They simply give up too many big plays. -Kevin Bertha

Narduzzi seems like a motivator and a players’ coach above all else. Narduzzi needs to sit his team down and do just that — motivate. Narduzzi needs to challenge the team and make them step up if they want to contend for a postseason bowl game. -Adin Link

At some point Narduzzi does need to prove his reputation as a defensive coach. Three years should be enough for Narduzzi to implement his culture on the field, but the tendency to give up big plays isn’t encouraging. Still, Pitt can’t ask for more than eight to nine wins a year. If he can do that again this year, he should feel secure. -Grant Burgman

Looking ahead to Saturday’s game:

If you thought what Penn State quarterback Trace McSorley and running back Saquon Barkley did to Pitt was bad, quarterback Mason Rudolph and wide receiver James Washington are going to (at least) double the stats they posted. McSorley finished Saturday’s game with 164 passing yards while Rudolph threw for 171 in the first quarter alone in his matchup against South Alabama Friday evening.

Pitt was able to suppress Barkley’s production in the first half of Saturday’s game with designs committed to stopping the run. Washington, on the other hand, plays wide receiver, a position Pitt has tremendous difficulty suppressing, especially without Whitehead. -Abbot Zuk

The Panthers are preparing to play another top-ranked team — No. 9 Oklahoma State. In the Cowboys’ two games, they dominated offensively. Their first game against Tulsa ended 59-24, and their second game against South Alabama ended 44-7. Pitt will need to step up both its defense and offense to avoid a crushing loss at Heinz Field Saturday. -Mackenzie Rodrigues