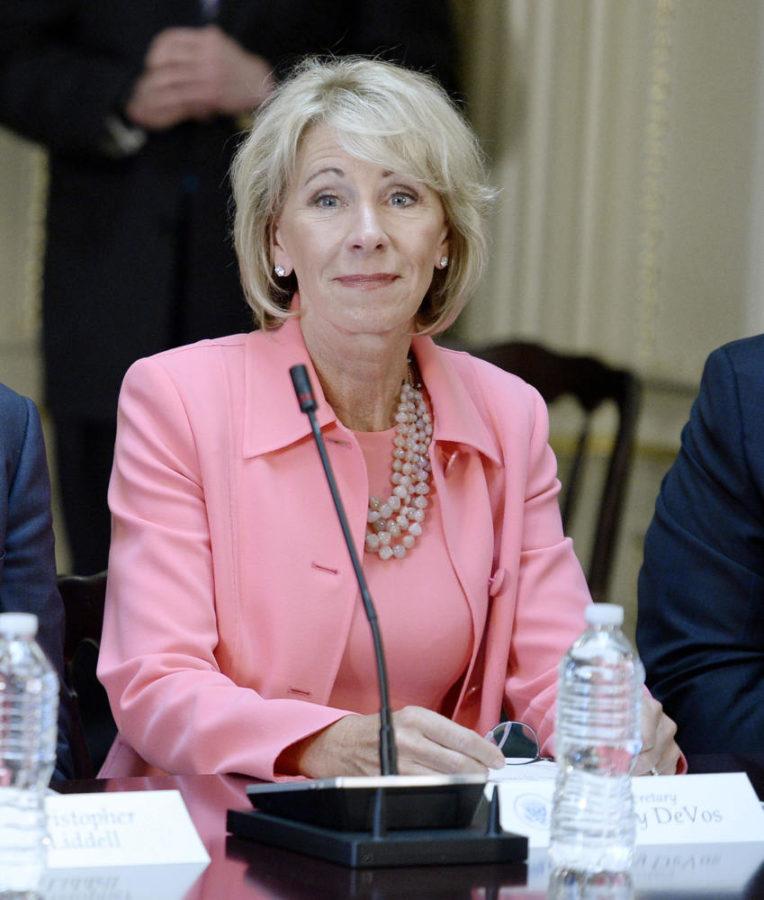 For a cabinet member who’s already one of the most controversial in the Trump administration, it would have seemed difficult for U.S. Secretary of Education Betsy DeVos to become even more divisive. Then she started to talk about rape on campus.

DeVos gave a speech on Sept. 7 at George Mason University in Virginia regarding her plans to develop new rules on how universities should respond to sexual assault complaints made under Title IX. And her words were truly frightening.

DeVos’ education department’s new approach will harm assault survivors by reversing progress made during the Obama administration. In an interview with CBS News immediately after her speech, Devos said the intention of her review would be to rescind the previous administration’s guidelines which implemented Title IX protections on campuses across the country.

DeVos claims she intends to take into consideration not only the rights of survivors, but also the accused, in order to revamp the system into one that she claims will be fairer.

The issue, however, is that the aim of her speech seemed to focus much more her perceived victimization of the accused than the protection of survivors. Multiple times throughout her speech, DeVos emphasized the idea that sexual assault cases lack “due process” for everyone involved.

One sentence in her speech stuck out in particular. As DeVos went on about how definitions of assault were too “broad,” saying, “If everything is harassment, then nothing is.”

While DeVos’ speech was ridiculous on a whole, this might have been the low point. Essentially denying the fact that much sexual assault on college campuses continues to go unnoticed or unpunished, she only stands to delegitimize the experience of survivors who have been treated unjustly. It’s disheartening for someone in a position of so much power to do such a disservice to young women across the country — telling them that perpetrators of sexual assault are the ones being wronged.

DeVos seems to be entirely uneducated on the truth about sexual assault. False accusations only make up about 2 to 8 percent of all reported rapes — about the same as other crimes, according to research from the National Center for the Prosecution of Violence against Women. Yet DeVos sees to believe that the accused are constantly treated unfairly by the law.

The fact is that most of the time, sexual assault perpetrators aren’t even tried or punished for their crimes. Statistics from the Rape, Abuse and Incest National Network show that only six out of every 1,000 perpetrators is ever incarcerated.

According to the Bureau of Justice Statistics’ National Crime Victimization Survey statistics from 2008 to 2012, an estimated 60 percent of all rapes are never even reported to the police. And it’s no surprise — survivors often fear that they will not be taken seriously or that they will even be told that their experience is “not a big deal” by those who were meant to help them. These would only get worse if DeVos’ rhetoric and ideas are put into practice.

All these statistics show that sexual assault on college campuses is still a very serious and prevalent issue. As many as one in five women are assaulted on campuses across the country, according to a 2015 study from the American Association of Universities. Policies under Title IX were enforced under the Obama administration to address this epidemic, but DeVos intends to reverse all that progress in order to make some sort of point — at the cost of

Over the past few days, countless survivors have come out and protested her plans to roll back federal law regarding campus sexual assault investigations. According to Laura Dunn, a lawyer and national director of the non-profit ServJustice, the education secretary’s concerns about the rights of the wrongly accused are misplaced at best.

“At most colleges and universities, the system still skews sharply in favor of accused students, especially those who are athletes, fraternity members and legacy students,” Dunn wrote in a column in The Washington Post this week.

DeVos’ proposal seeks to give further protection to sexual assault perpetrators, and is essentially an attack on sexual assault survivors that have fought hard to be heard by those who delegitimize their experiences. Survivors deserve a secretary of education that is going to fight for their rights, not try to invalidate them.

The rights of the accused seem more valid to DeVos than the rights of survivors. She is further contributing to a culture where men believe they can treat women however they want, and where women should take it without any backlash for men.

Fortunately, lawmakers in our state are doing something to fight back against attempts to rescind Title IX on campus. Pennsylvania Gov. Tom Wolf announced last week that six bills dealing with the issue of sexual assault on college campuses would be introduced on the floor of the commonwealth’s House and Senate soon.

Among the policies to be proposed in the upcoming legislation is a rule that colleges in the Pennsylvania give amnesty from drug and alcohol offences to students who report a sexual assault and that colleges adopt affirmative consent standards.

In a time when the federal government is looking to roll back protections for survivors of sexual assault, it’s vital to support legislative projects like these. Other states and colleges around the country should look to Pennsylvania as a leader in the fight to defeat DeVos and her dangerous agenda.

Erica primarily writes about social issues and mental health for The Pitt News.

Write to Erica at [email protected].