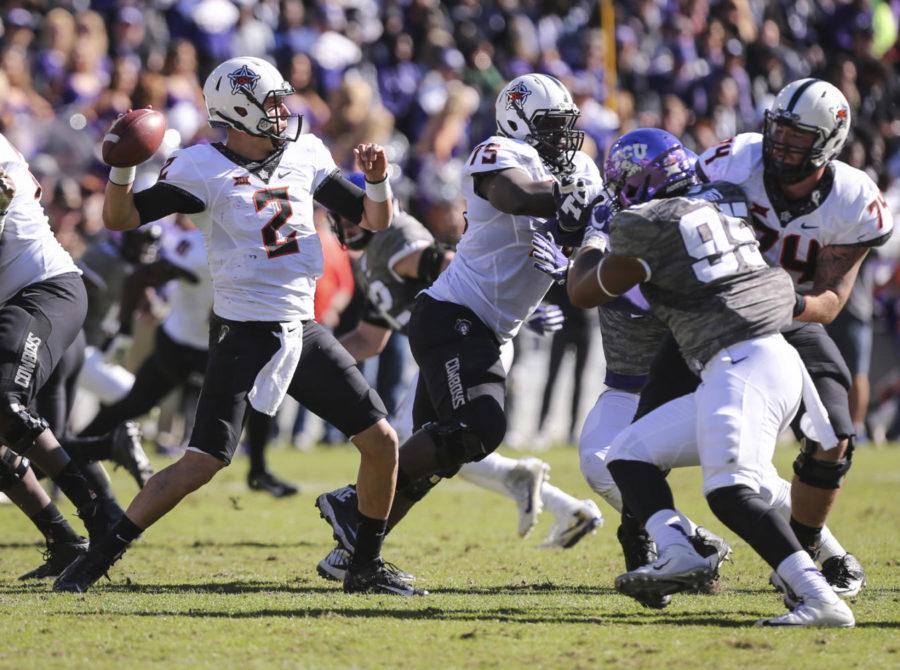 By Abbot Zuk | For The Pitt News

Trace McSorley’s aerial attack and Saquon Barkley’s electrifying footwork from Saturday’s football game against Penn State will look like child’s play compared to what senior quarterback Mason Rudolph and senior wide receiver James Washington of Oklahoma State have in store for the Panthers.

Despite coming off a demoralizing loss to in-state rival Penn State, the Panthers will face a greater challenge still at the matchup on Saturday, Sept. 16. Panther fans, heed this warning: the worst has yet to come.

The behemoth that is Oklahoma State will march into Heinz Field on Saturday led by their seniors, Rudolph and Washington. If you fancy yourself a Pitt fan, you may recall the 45-38 competition between these two teams last year in Stillwater, Oklahoma. Both Rudolph and Washington outperformed their Panther opponents on that day.

Rudolph, who stands at a staggering 6-foot-5, threw for 540 yards, along with completing 56 percent of his passes and two touchdowns — each to Washington.

Yes, Penn State had a great game against Pitt, but Oklahoma State’s performance was that of next-level college football. McSorley finished Saturday’s game with 164 passing yards and three touchdowns, while Rudolph threw for 171 yards and two touchdowns in just the first quarter of Oklahoma State’s Friday evening matchup against South Alabama.

Even when the Panthers attempted to hamper Barkley’s rushing yard production, they couldn’t figure out the play. On more than one occasion, Barkley was the decoy in a run-pass option. Both times, the Panthers overcommitted to stopping Barkley, and senior tight end Mike Gesicki was left open for McSorley’s passes and, ultimately, the team’s touchdowns.

The Panthers will face an even larger task when they commit — or try to commit —  to halting  Washington’s output. Pitt will struggle against plays where the ball is intended for Washington. The team’s chances of stopping Washington also suffer without the help of junior defensive back Jordan Whitehead, who is serving the last of his three-game suspension.

During Whitehead’s 2017 season absence, Pitt’s secondary has allowed opposing quarterbacks to pick and choose their favorite targets with ease.

It is no secret quarterbacks favor certain wide receivers over others. Only two receivers made up 61 percent of Youngstown State quarterback Hunter Wells’ completions and three targets made up 73 percent of McSorley’s completions. Unless Pitt intends on triple-covering Washington on each snap, Rudolph won’t have trouble getting him the ball.

Even if Whitehead were eligible for Saturday’s matchup, he’d become another drop in the proverbial Rudolph-Washington bucket. So far this season, the Cowboys have squared off against Tulsa and South Alabama, who because they’re not in the Power Five conference and have sparsely decorated pasts, may sound like middling opponents at best.

In two games, Rudolph threw for 638 yards, for five touchdowns, and added one rushing touchdown. Washington collected eight receptions for 243 yards — 30.4 average yards per reception — and three touchdowns. Combined, these two are responsible for 69 percent of Oklahoma State’s 13 touchdowns this season. The Panthers will need to stop both of these threats if they don’t want to increase that percentage by much.

Rudolph and Washington’s power reaches beyond the college football realm. Oklahoma State’s dynamic duo will be the two most NFL-ready caliber players Pitt — and quite frankly anyone in the FBS — faces all season. Though the college football season is still in early play, they are the only quarterback-wide receiver combo projected to go in the top 10 of the 2018 draft by CBS’ Chris Trapasso.

Rudolph and Washington are both accustomed to living up to NFL talent expectations. Rudolph surpassed former Oklahoma State quarterback Brandon Weeden’s 9,260 career passing yards to become the university’s all-time leading passes. Weeden spent time in the NFL courtesy of the Cleveland Browns and finished his career in 2016 with the Houston Texans.

Oklahoma State enters Saturday’s matchup ranked ninth in the nation. The second top-10 team Pitt will face in two weeks. Despite being the only team to beat two top-five teams last season — Penn State & Clemson — the Panthers’ chances of shocking the world this week are slim to none.