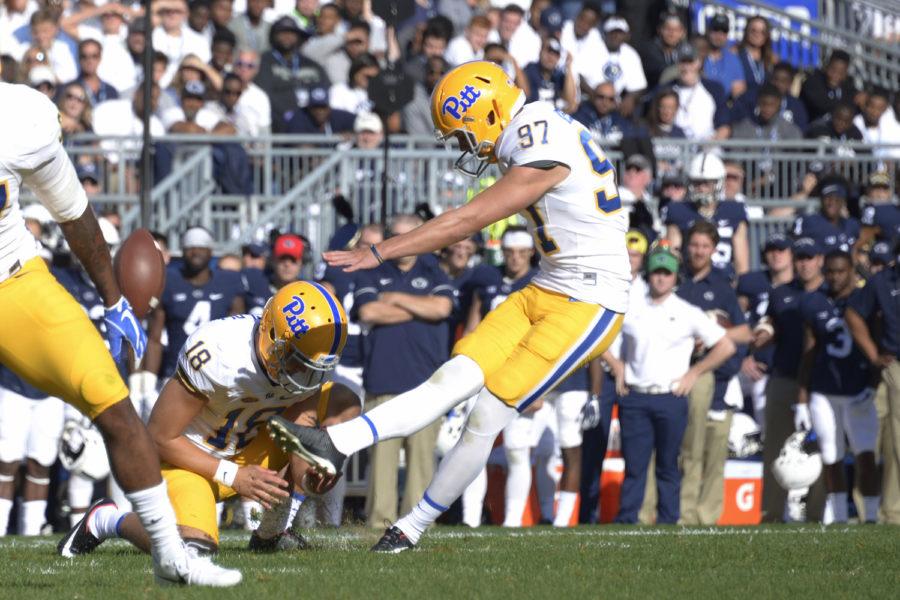 The Panthers entered the fourth quarter tied at 38 against the Oklahoma State Cowboys last year in Stillwater, Oklahoma.

The Cowboys took over — with a chance to win — with just under two minutes to go. They capitalized on the possession, as quarterback Mason Rudolph took advantage of Pitt’s porous pass defense. He hit receiver Jhajuan Seales for 86 yards, setting up the game-winning score with one minute and 20 seconds on the clock.

The loss was tough for the Panthers, who entered the contest undefeated coming off their 42-39 win over Penn State. This year, though, head coach Pat Narduzzi and Pitt are entering into the game on the other side of the spectrum, having lost to the Nittany Lions a week after FCS Youngstown State took them into overtime.

In order for the Panthers to avenge last year’s loss, the offense will have to be much better than they’ve been so far, considering how many points Rudolph and Oklahoma State can put up.

The Cowboys’ offense averaged over 38 points last year, finishing 22nd in the country in yards per game with 480. The squad finished 10-3 overall and returns with several key factors of their recent success.

On the outside, Rudolph has senior wide receiver James Washington as his leading target. Washington caught 71 passes for 1380 yards in 2016, including nine for 296 against the Panthers — both season highs.

The pair is also aided by sophomore running back Justice Hill, who provides a legitimate threat on the ground. Pitt’s rushing defense has improved since Narduzzi arrived in 2015, but the third-year coach thinks Hill will provide a tough challenge for his defensive line.

“I think Justice Hill is going to be the fastest tailback we face this year,” Narduzzi said in his weekly press conference. “[When] you watch him, he’s fast.”

In short, the Panthers’ defense is going to have a tough time slowing down the Cowboys. Last week against Penn State, though, the pass defense looked to have improved somewhat, holding redshirt junior quarterback Trace McSorley to a .536 completion percentage.

If the Pitt secondary can play to that level again, the Panthers should at least do enough to keep the game within reach and give their offense a fighting chance. Still, it would be difficult to pull off the upset, considering the Panthers’ offense has been anything but impressive thus far.

Browne, a graduate transfer from USC, has completed 36 of 56 passes on the year for 278 yards and one touchdown. In the game against Penn State, though, he threw two bad interceptions and showed his lack of mobility, getting sacked multiple times.

His deficiencies have been especially apparent inside the red zone, which is what ultimately cost the Panthers a chance at Penn State. With Browne, Pitt had two drives go inside the 10-yard line and only came out with six points, ultimately costing them a chance to win late.

And while redshirt freshman kicker Alex Kessman made both of those field goals, he struggled in the Panthers opening-day matchup against Youngstown State. In that contest, he missed two field goals, which could have made the game much less competitive.

Going forward, the offense has to capitalize on these opportunities and put points on the board. It’s difficult to know what they’re going up against this week since the Cowboys have only played non-Power Five opponents so far. But history says they should have their fair share of opportunities against a subpar Cowboy defense.

In 2016, the Oklahoma State defense let up just over 28 points a game against Power Five opponents and — like most other Big 12 teams — they don’t have a stellar defense.

Pitt redshirt senior wide receiver Jester Weah and redshirt junior running back Qadree Ollison should both have solid outings. The two have combined for 328 yards on the season and are the Panthers’ biggest threats in the receiving and rushing games, respectively.

To pull off the upset, they’ll both need to outperform their expectations, and that will only come if Browne can get them the ball. Either way, it will be a tough game for the Panthers, who look to improve to 2-1 heading into conference play a week later.

Prediction: Last week against Penn State, the pass defense impressed and gave the offense the chances it needed. Had a few plays gone differently, it could’ve been a very competitive game, with the Panthers winning in both total yards and time of possession.

This week, the offense will come together and starts to convert on more opportunities. The defense will give up a fair amount of points — something bound to happen considering the Cowboys’ explosiveness.

This is the game where it all comes together for the Panthers, who limit Rudolph and the Cowboys enough to pull out a win.