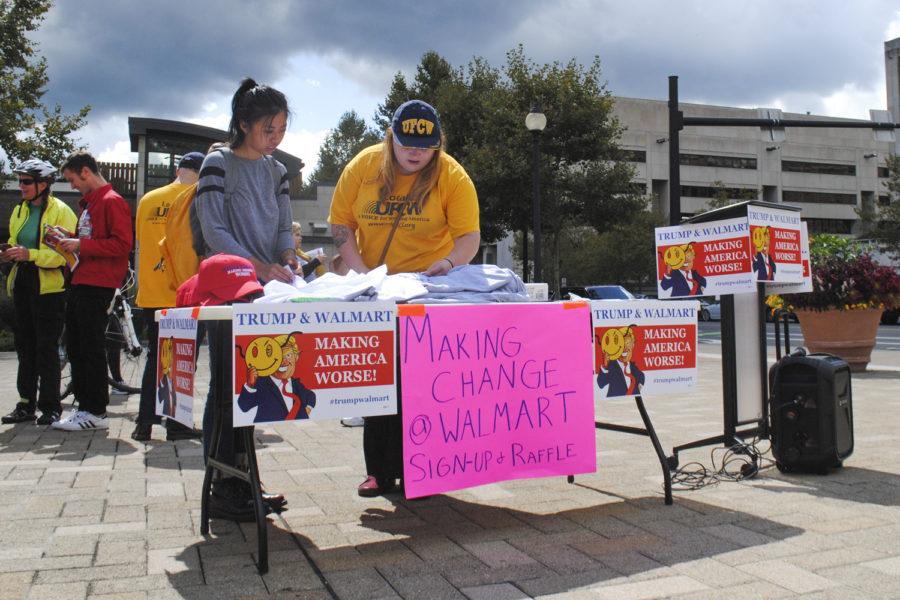 If you were on campus last Friday, you might’ve seen an RV sporting a cartoon photo of Donald Trump hiding behind a smiley face mask. This unusual RV serves as the mobile headquarters for the 2017 Trump and Walmart Make America Worse Tour.

Dighan Kelly, a sophomore urban studies and French major, organized the stop at Pitt. Although meant to be a protest against Trump’s policies that protect large corporations, such as Walmart, from paying corporate taxes, it shifted to a call for liveable wages for students and Americans across the country.

One of the most prominent parts of the day was when Sean Bailey, co-chair of the University chapter of the Young Democratic Socialists, gave a passionate speech on the importance of raising wages. Bailey called for a $15 hourly minimum wage.

The current U.S. minimum wage of $7.25 per hour has not increased since its $0.70 jump in 2009. In fact, since its creation under FDR, Congress has only increased minimum wage 22 times — a shockingly low number in its 79 years. Pennsylvania still operates under the federally suggested minimum wage, though there are currently 29 states whose minimum wages exceed the federal standard.

In recent years the “Fight for $15” movement has been popularized among many left-leaning voters — but the issue of wages is a human one, not a partisan one. No one can survive making $7.25 an hour after taxes. It’s time for the movement to become a bipartisan effort ensuring all individuals are able to afford basic needs such as food, housing and insurance.

A common example provided against raising the minimum wage is that “no high schooler flipping burgers deserves $15 an hour.” Despite the fact that U.S. college tuition is higher than ever before and plenty of younger Americans could greatly benefit from a higher minimum wage, this argument presents another problem.

According to the Economic Policy Institute, those who would benefit most from increasing the minimum wage are 35 years old on average. The same study shows 56 percent of low-wage workers are women, 55 percent work full time and 28 percent have children. So rather than seeing an increase in minimum wage as the “easy way out” for a high schooler, it should be seen as a way of allowing adults, who on average earn half of their households’ incomes, to live comfortable lives.

People living on minimum wage definitely aren’t living comfortable lives now. For people who work 40 hours a week, their average weekly earnings amount to $267.80 after Social Security and Medicaid taxes. That adds up to around $14,000 a year. And though the Federal Poverty Line for an individual is $12,060, you cannot live sustainably while life planning on less than $2,000 above the poverty line.

Take the cost of living in Pittsburgh, for example. The average price of rent for a one-bedroom apartment is $1,162 per month. Heating, water, electric and garbage services add up to an average of $165 a month. Add that to the recommended $367 per month on food and you have already exceeded the monthly salary of someone earning $10.58 an hour, an hourly wage well above the federal minimum. And that math doesn’t even include health insurance, transportation and other various unexpected costs.

But the issue isn’t just individual. Forcing people to live paycheck to paycheck prevents people from saving money, and at the same time increases their dependency on federal aid.

The Congressional Budget Office reported in 2014 that a wage increase to $9 per hour would lift 300,000 people out of poverty, while an increase to $10.10 would be sufficient to lift 900,000 people out of poverty. Clearly, any additional rise from there would drastically improve the level of poverty that exists in this country, and could help decrease federal spending on programs like Temporary Assistance for Needy Families and the Supplemental Nutrition Assistance Program.

Full-time employees should not be struggling to meet their own basic needs, and any argument against that ideology is morally flawed. A job is a job, and the minimum wage should be a liveable wage.

Elise is the Layout Editor at The Pitt News and primarily writes about political and social issues for the Opinions Desk.

Write to Elise at [email protected]