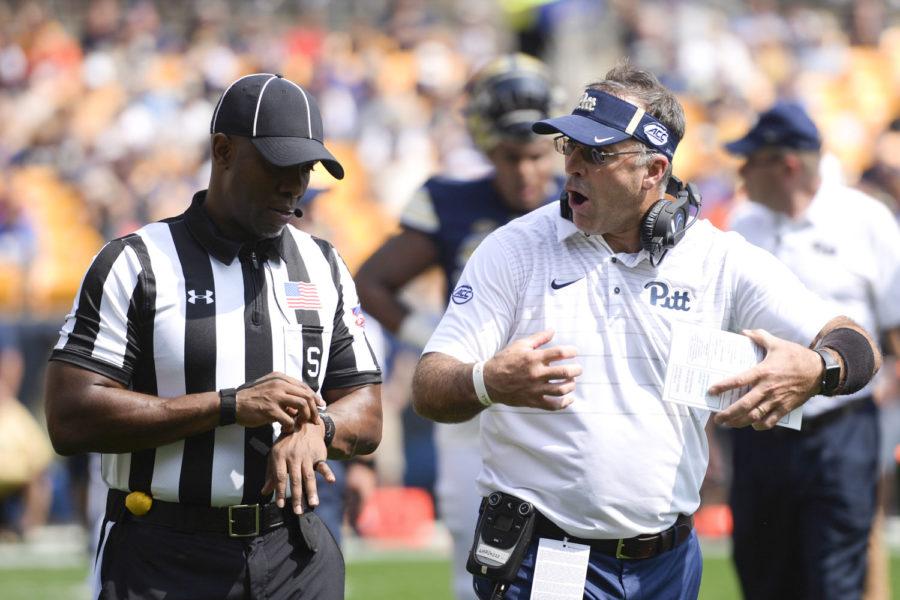 If Pitt wants success this season, Narduzzi will need to rethink his defensive strategies. (Photo by Kyleen Considine | Visual Editor)

Oklahoma State made history in its matchup against Pitt on Saturday. Not only was it Pitt’s worst loss at Heinz Field, but — for the first time in 12 years — an FBS team had four different receivers rack up at least 100 yards each in the same game.

The Panthers on the field aren’t the only ones to blame for this atrocious loss, though. Defensive Coordinator Josh Conklin and head coach Pat Narduzzi should take just as much — if not more — of the blame for Pitt’s horrendous defensive performance that cost them the game.

In his two career games versus Pitt, star Oklahoma State quarterback Mason Rudolph threw for 1,037 yards and seven touchdowns. Four hundred ninety-seven of those yards and a whopping five touchdowns happened during a single half against the Panthers Saturday.

While Rudolph is one of the best quarterbacks in the country, Pitt looked wholly unprepared for the Cowboys’ air raid offense.

Oklahoma State was able to find a lot of success throwing in between the safeties. Rudolph could often find wide open receivers deep over the center of Heinz Field, including two touchdowns to junior receiver Jalen McClesky.

But Narduzzi and Conklin made no adjustments.

Pitt also played man coverage throughout most of the contest, and the gulf in talent was massive. Across the board, Oklahoma State’s receivers were more athletic and stronger than Pitt’s defensive backs.

Jalen McCleskey was able to speed past Pitt safeties for two of his three touchdowns. Six-foot-four receiver Marcell Ateman was a dominating physical presence which 6-foot cornerback Dane Jackson struggled to deal with. Ateman bullied Jackson for four catches, 109 yards and a touchdown in the contest.

Playing man coverage hurt Pitt in defender versus receiver matchups on the outside, too. But, again, Pitt made no adjustments to account for the mismatches, and Narduzzi’s defense was burned for 572 passing yards. 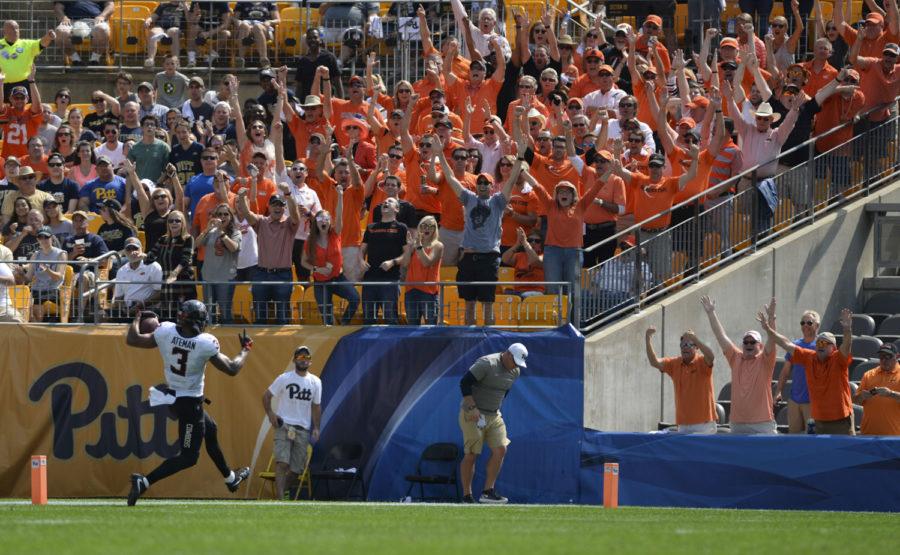 Oklahoma State made history against Pitt on Saturday, with four receivers racking up at least 100 yards each in the same game. (Photo by John Hamilton / Managing Editor)

Pitt decided to take a chance playing man in the secondary, hoping the pass rush would be able to get to Rudolph and disrupt his timing. This strategy didn’t work, as Pitt recorded only one sack on the day and clearly didn’t disrupt Rudolph.

It’s not like Oklahoma State was a complete surprise, either. After all, Pitt did travel to Stillwater last year to face the Cowboys in a matchup which they lost 45-38. Rudolph torched the Panthers last year as well, to the tune of 540 yards — an Oklahoma State school record.

So how did Narduzzi’s squad look completely unprepared for the Cowboys this season? Pitt knew what they were getting in Oklahoma State, and still did nothing different schematically in comparison to last year to account for the Cowboys’ explosive offense.

The lack of adjustment is frustrating for what looks to be the start of a long, disappointing season. Panthers cornerbacks have been beaten repeatedly in man-to-man coverage, even against Youngstown State. They simply aren’t strong enough or fast enough to match up man-to-man with talented receivers.

Pitt’s coaches don’t seem to see this obvious fact. Narduzzi and Conklin continue to stick to their system, even when it is not working.

Narduzzi came to Pitt with the reputation of being a defensive genius — writer Zac Ellis of Sports Illustrated said in 2014 that his hiring “means at least one thing for the Panthers’ future: good defense.” If Narduzzi wants to regain that reputation, he needs to make changes to Pitt’s defense, and fast.

Though the Panthers’ offense led them to a respectable season last year, the defense was near the bottom of the FBS — allowing 466 yards per game. This year — with their offense not on par with last year’s — Narduzzi’s refusal to change his defense will lead to a disappointing and frustrating season.

Zone coverage may ease some of the pressure on Pitt’s cornerbacks. Star junior safety Jordan Whitehead’s return from suspension next week should help cut down on deep balls over the middle. Something needs to be done about the pass rush as well, as Pitt only has three sacks on the season so far.

The defensive changes that need to be made are clear to Pitt fans — let’s see if Narduzzi and Conklin will recognize these issues or remain stubborn.