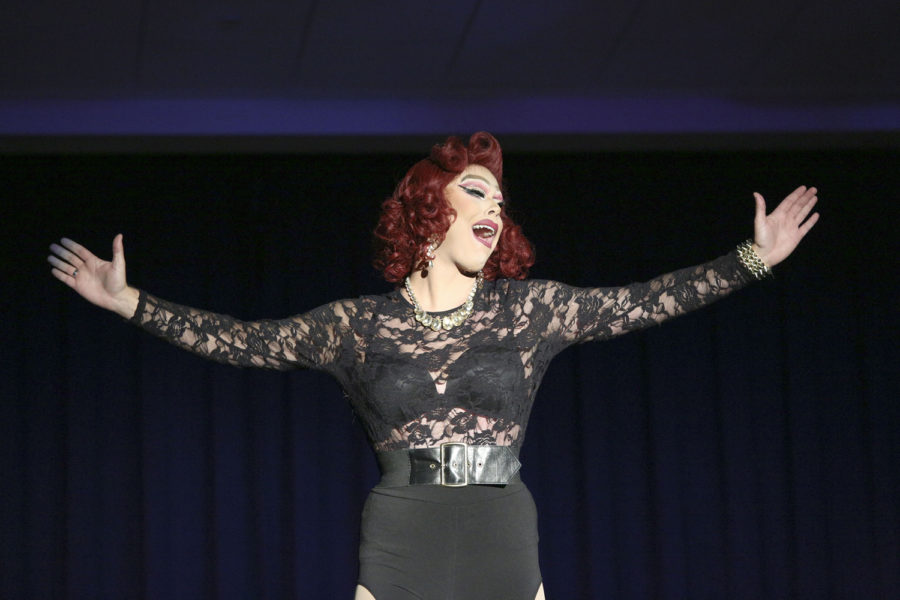 By Nina Kneuer | For The Pitt News

A runway extended out from the William Pitt Union assembly room stage, lined with rainbow-colored Christmas lights and framed by chairs on either side.

The Office of First Year Experience and Pitt Rainbow Alliance presented Panther Drag, a show filled with drag performances and audience participation, Friday evening. Audience members filled the seats long before the show began, and even after organizers brought in dozens of extra chairs to compensate for the lack of space, nearly 50 people were still escorted out.

Kayla Bradley — the master of ceremonies for the night and communications director for Pitt’s Rainbow Alliance — took the stage first, pumping up the crowd and instructing everyone to scream, “Yas, queen!” Bradley debunked some common misconceptions in drag, saying it’s not only men who perform in drag and that not all men who do drag are gay.

Bradley said a drag show is an exaggerated artistic performance of gender norms which range from “extreme masculinity to extreme femininity.”

Madison Scull, a junior at Pitt and a triple communications, sociology, and gender, sexualities and women’s studies major, became Anne T. Christ when she got on stage.

Scull said she always thought drag was something she couldn’t do as a cisgendered female. But in the end she told herself, “Who cares, why not do it?”

“I don’t care what your gender is, like how you identify, you should just go for it. There are so many people that believe that drag is essentially a predominantly white cisgender gay man world, and it’s just not,” Scull said. “Drag is so expansive.”

Scull continues to perform in drag out of her love for it, but she has encountered people who hold the views that Bradley mentioned — such as only men can be drag queens. She said this view seems patriarchal to her.

“Sometimes in the broader drag community, as a female drag queen, people can … not be so nice,” Scull said. “I’ve had all the comments like, ‘Oh you’re not a real drag queen,’ ‘You shouldn’t even be here,’ and I’m like ‘Why? What we’re doing is the same art form.’”

Click here for a full gallery of the Drag Show

After Scull, a drag queen introduced as the Death-Dropping Diva — also known as Alexa Killer — emerged. The audience erupted in cheers and claps after she executed each death drop — a type of dance move in which the performer falls flat on their back from a standing position with one leg extended in front and one leg bent behind.

Peter Crouch took to the stage not as a drag queen, but as the drag king, Dick Hillman. Crouch — a former president of Rainbow Alliance and a senior global management and supply chain management double major — likes the fun of playing a different character and interacting with the audience. The Panther Drag show wasn’t Crouch’s first drag performance — he’s previously performed in two shows.

Scull — who grew up doing theater — also performed in drag prior to Friday’s performance, but she began last spring. Scull said it was a nice surprise to have so much support from the Pitt community.

“The more I do it, the more I just absolutely fall in love with it,” Scull said. “Anytime that I can go out and do drag I want to do it.”

For Alex Schnackenberg — known on stage as Amneeja Schnackenmuff — performing feels like blacking out. The grad student in the gender, sexualities and women’s studies department has worked as a professional drag queen for the past three years. Schnackenberg said you can say things in drag that you wouldn’t normally be able to say as yourself and he likes performing for that reason.

“It’s nice to be pretty and political,” Schnackenberg said. “You can do a lot of satire with drag.”

Amneeja, the queen with bright blue heels and maroon-lined lips, lip-synced a remixed version of Whitney Houston’s “I Will Always Love You,” which included bits of a 2010 viral YouTube video of a frustrated girl screaming because she is unable to hit the notes in the song.

“It’s a drag show, anything can happen,” Amneeja said. “As long as it can be done in seven-inch heels.”